As the US Mint Numbers reveal, in the Wake of Trump Market Euphoria, sales of gold and silver have plummeted in the West (especially USA), but surged in the East:

There seems to be a percentage of the alternative community that are convinced that Trump will actually put the U.S. back to the way it was in the 1960’s.  And that is, back to a manufacturing powerhouse with high-paying jobs.  While this would be a wonderful thing to do, the continued disintegration of the global oil industry, just won’t allow it to happen.

IT WAS A ONE-TIME DEAL, and that period has come and gone…. FOREVER

Regardless, Western demand for precious metals declined considerably in February versus the same month last year.  A few years ago I spent more time publishing articles on gold and silver demand, but have refocused my analysis on how energy will impact the precious metals, mining and the overall economy.

However, Louis at Smaulgld.com does an excellent job publishing articles on precious metals demand.  So, I have used some of his data and one of his charts.

As I stated above, the Trump market euphoria has taken the wind out of precious metals investor recently.  According to the data from Smaulgld.com and the U.S. Mint, sales of gold and silver have plummeted in the West (especially USA), but surged in the East: 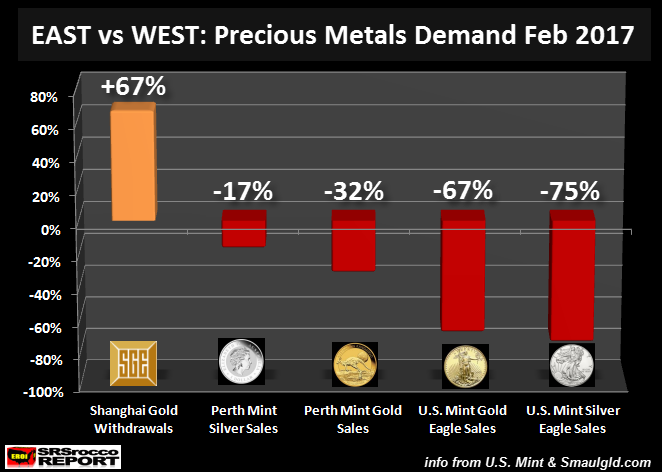 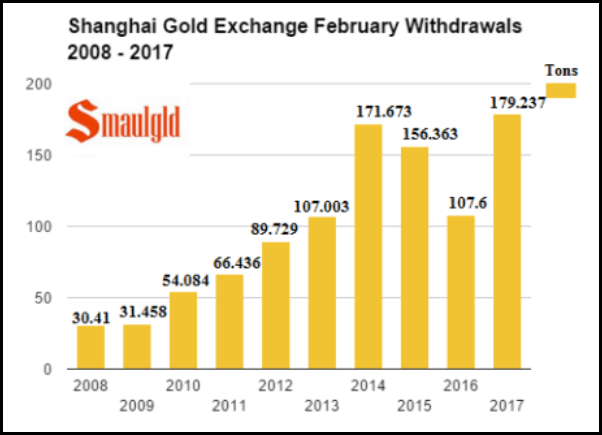 The decline in U.S. Gold Eagle and Perth Mint gold coin sales in February versus last year equaled 67,806 oz.  However, Shanghai Gold Exchange withdrawals increased 2,315,000 oz in February compared to the same month last year.  So, we can clearly see that the increase in just Chinese demand, via the Shanghai Gold Exchange withdrawals, more than made up for the decline in Western retail official cold coin purchases.

I would imagine most precious metals investors came across this article published on Zerohedge a few days ago, Demand For Physical Gold Is Collapsing.  It seems as if the intent of this article was to generate a lot of READS.  Because, if we look at what is taking place in China, there is no collapse in physical gold buying.  Matter-a-fact, there was a record amount of gold withdrawn off the Shanghai Gold Exchange last month.

The author of that article, needed to include a footnote stating the following:

Western physical precious metal demand (especially in the USA) decreased significantly due to the Trump Market Euphoria, while Shanghai Gold Exchange withdrawals hit a new record in February as the Chinese realize the U.S. economy and Dollar is still toast.

I am completely dumbfounded by recent decline in precious metals demand and sentiment in the West.  While I can understand the reason precious metals investors believe Trump will make America great again, the awful ENERGY DYNAMICS in the future will not allow us to return to the good ‘ole days of a manufacturing super-power.  Rather, the upcoming collapse will change our lives forever.

When the Dow Jones Index and broader markets finally crack, there won’t be many SAFE HAVENS to invest in.  Along with a collapse of the Dow Jones Index, Real Estate prices in all sectors will also head down the toilet.  Investors scrambling for something to protect wealth will finally move into precious metals.  Unfortunately, there won’t be the available supply… only at MUCH HIGHER PRICES.

So, this current downturn in Western physical gold and silver purchases do not faze me one bit.  It only indicates that most Americans are completely insane when it comes to sound fundamental investing.

IMPORTANT NOTE:  I will be publishing an article on the continued disintegration of the Global Oil Industry.  I provide data showing how Mexico’s national oil company, PEMEX, is literally BANKRUPT.  By looking at the data, logic suggests that the global oil industry is in serious trouble.

Lastly, the data for the Perth Mint sales came from two articles at Smaulgld.com, Perth Mine Silver Sales Slump In February and Perth Mint Gold Sales February Drop 32%.  Sales of Gold & Silver Eagles were found on the U.S. Mint website.