While Peru’s silver production surged in the beginning of 2016, it experienced a double-digit decline in December versus the same month last year.  Peru is the second largest silver producing country in the world, trailing Mexico by approximately 40 million oz, but now leading third-ranked China by a wide margin.

Peru started off 2016 with a bang by increasing silver production 14% in the first three months of the year: 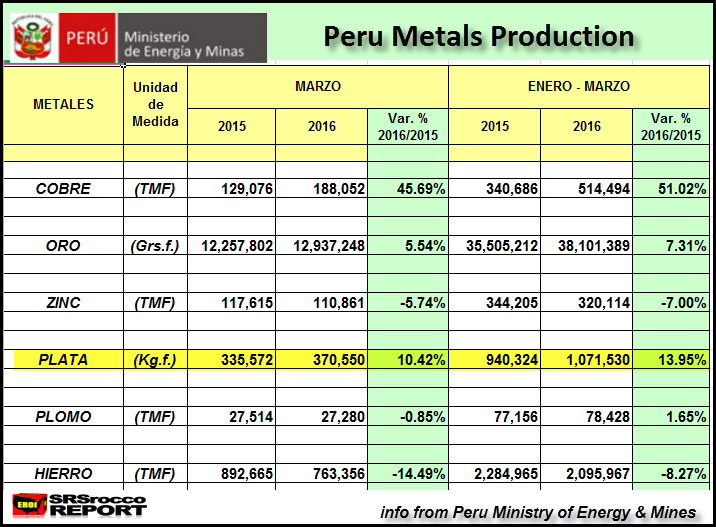 The mining production figures in the table (Source: Peru Ministry of Energy & Mines), shows that Peru’s silver production in March increased 10% versus the previous year and nearly 14% in the first three months compared to the same period in 2015. 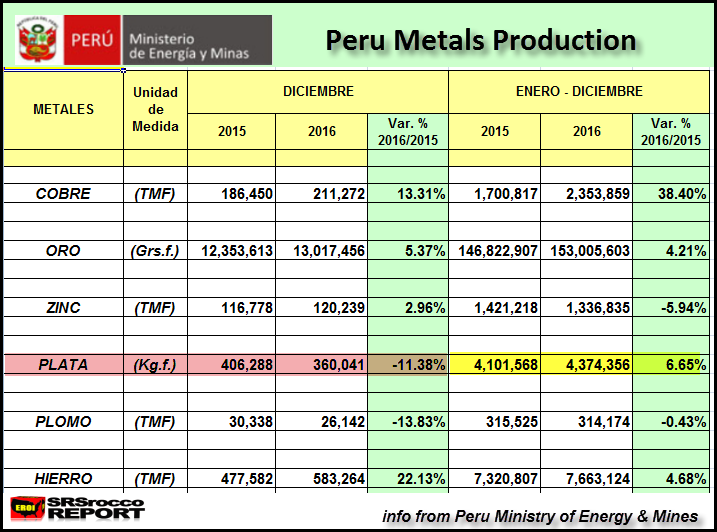 However, this big surge in Peru’s silver production may peak and decline as mining investment has declined significantly over the past three years.  When the spot price of all metals were reaching new highs 2011-2013, mining investment in Peru surged to a record high of $9.9 billion in 2013: 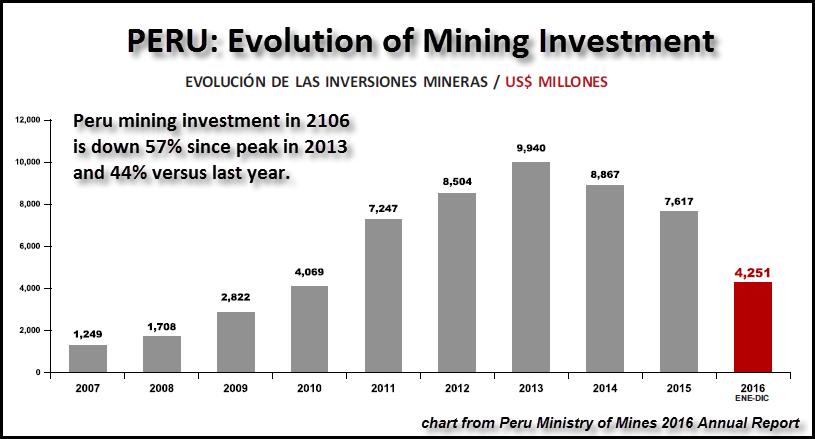 Unfortunately, as the commodity and metal prices declined sharply after 2013, investment in Peru’s mining industry plummeted.  As we can see, Peru’s mining investment fell 57% in 2016 versus its peak in 2013… and 44% compared to the prior year.

While overall mining investment has most certainly dropped significantly in the past three years, the biggest decline came in the “Plant Investment” area.  Investment in Peru’s mining plant capital expenditures fell a stunning 83% from $1.4 billion in 2013 to $234 million last year.  This huge decline in Peru’s mining investment will have a negative impact on future metals production in the country.

Furthermore, the Silver Institute (using Thomson Reuters GFMS data) forecasts that global silver production will decline 1% in 2016 even with a 6.6% growth in Peru’s domestic mine supply.  When the U.S. and global markets finally crack, the prices of base metals will continue to decline.  Thus, base metal’s production will likely start to fall off in the coming years.

Regardless, the world is now reaching peak production in energy and metals.  Unfortunately, the downside of the production profile will not be slow and subtle.  Rather, we will likely experience something resembling a CLIFF-LIKE decline in the future.

Global silver supply will be impacted a great deal more than most other metals due to the majority of its supply coming from base metal and gold production.