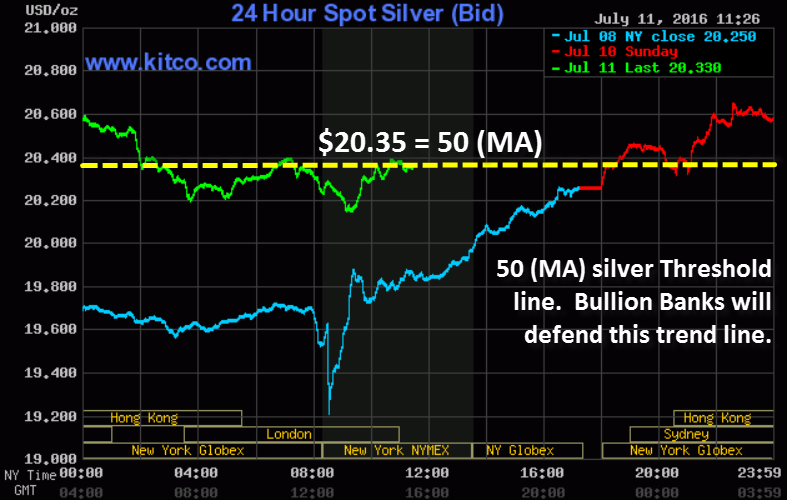 The important silver threshold line was broken briefly last week and continues to bump up against it in early trading today.  If the silver price closes above this threshold line by a significant margin, it could mean big trouble for the bullion banks who hold record silver short contracts. 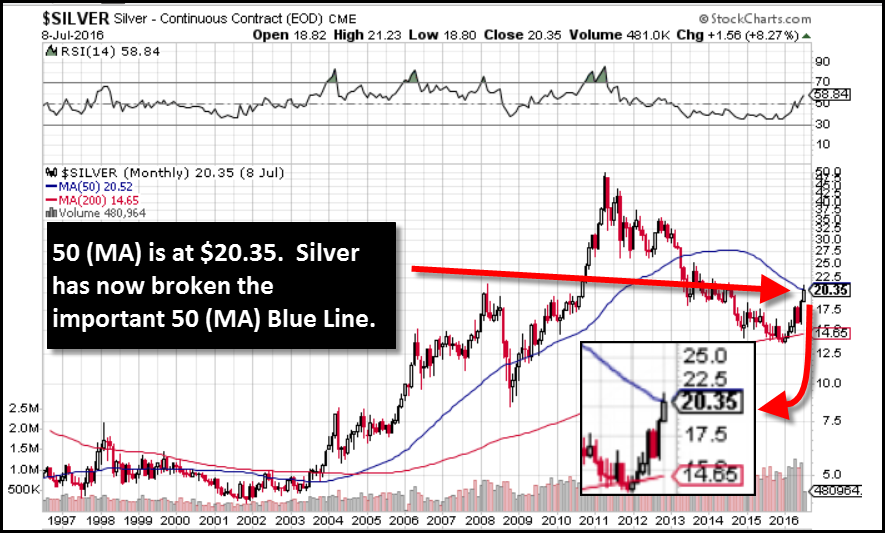 Let me explain this chart, especially for new folks to the site and the industry.  While I focus on the mid to long term fundamentals of the silver market, professional traders look at these charts and trend lines very carefully.  Normally, I don’t spend much time looking at this info, but because we have now punctured an important silver trend line, what happens next could be very interesting.

There are two lines in this chart.  The RED LINE is the 200 (MA).  This is the average silver price based on a 200 month moving average.  What is important about this 200 (MA) trend line is that once the silver price moved above it in 2004, it has not fallen below it, except very briefly at the beginning of 2016, when it bounced off it.

Thus, the 200 (MA) in this monthly chart denotes a bottom that traders are looking at.  Because the silver price bounced off the 200 (MA) and is now trading at $20, traders believe silver will not fall below $14.65.  Thus, $14.65 is a strong support level for silver on a long-term monthly chart basis.

Now, there is the 50 (MA) BLUE LINE.  Ever since the silver price fell below the 50 (MA) line in the beginning of 2013, it has stayed below it for nearly three years.  However, it finally broke above it last week when silver hit $21 briefly.  Professional traders are looking very carefully at how silver trades over the next few weeks.  If silver closes above $20.35, the 50 (MA) trend line at a significant margin by the end of this month, we could see a lot more hedge funds and large traders jump into the silver market bandwagon.

However, the bullion banks who hold record commercial silver short contracts, will likely defend the $20.35 price at all costs.  Here is a Kitco 3-day silver chart:

Last night in early Asian trading (shown as a RED LINE), the silver price once again broke above the 50 (MA) $20.35 threshold line.  Then in London and U.S. trading (GREEN LINE), silver continues to bounce up against the 50 (MA), which is shown as a yellow dotted line. 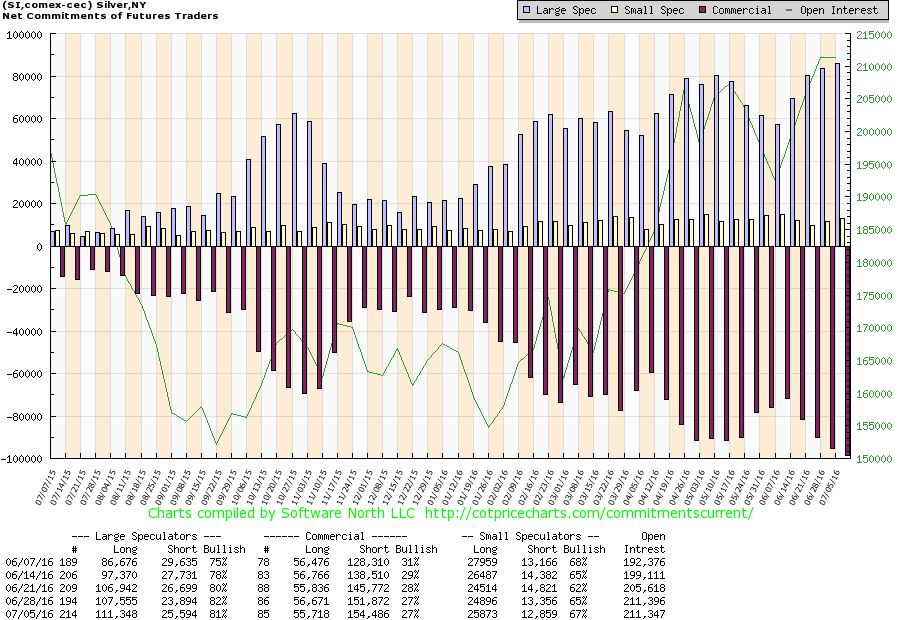 As we can see, the Commercials hold a record number of net short contracts.  However, if we go back to the end of 2015, the Commercial Net Short silver contracts were about 24,000 contracts.  This was at the time the price of silver hit a low of $13.85.

Which means, since the end of 2015, the Commercials’ Net Short positions have increased by a whopping 75,000 contracts.  Those new to the silver market need to understand that each contract represents 5,000 oz of silver.  Thus, the Commercial Net short position in silver is now 375 million oz.

The Commercials have added 75,000 net short silver positions as the silver price increased from $13.85 to $20.50.  If the silver price moved up about $6.50 during this time, we can assume that the Commercials average price is half of that figure.   But, let’s be more conservative and just say the average price they are underwater is $2.50.  Thus, the Commercials are underwater $937 million, or nearly a $1 billion.  That could amount to one hell of a lot of losses if the price of silver continues to rally higher.

Furthermore, if the price of silver does close above the 50 MA of $20.35 at say $21 by the end of the month, then we will likely see more hedge funds and large traders move into the silver market as a leverage trend play.  This would cause the Commercials to be underwater at an even higher level.

This is why I call the breaking of the $20.35 Threshold line, CONDITION RED for the Commercials.

Now, I don’t know what the short-term silver price outcome will be.  Although, as the Central Banks continue to add more QE to prop up the broader markets. this added liquidity may also make its way into the precious metals.

At some point, the Commercials may finally experience the SHORT SQUEEZE from hell as they will have to buy back their underwater positions as the price of silver surges higher.  This will cause an even more dramatic move higher in the silver price as the Commercials try to exit a bad trade.

That being said, the Commercials have controlled the silver price and market with their record short net positions in the past.  But, there is always a FIRST TIME for everything.  While I only look at these short-term trends for amusement, the mid to long term fundamentals point to a silver price that is considerably higher than it is today.

I have read comments on my site and on others from investors who have found a hobby or pastime in blaming precious metals analysts and dealers for the ills of lower gold and silver prices since 2012.  While this only represents a small fraction of the precious metal community, I would like to state a few logical points.

Maybe the individuals who enjoy berating precious metals analysts and dealers as the “SATAN”, why don’t you wake up and look at where the REAL FRAUD that is taking place in the Banking Industry.  Wake up and smell the FOUL MASSIVE DERIVATIVES MARKET.