At some point, an onslaught of traders moving into silver will totally overwhelm the bullion banks and we will finally see that Commercial Bank Short Squeeze from hell.
This will come as the silver price skyrockets, thus making it even harder for investors to acquire physical metal, triggering REAL silver shortages…

Americans and Canadians will likely face silver shortages in the future as investment demand continues to surge higher.  This will come as the silver price skyrockets, thus making it even harder for investors to acquire physical metal.

The U.S. and Royal Canadian Mints produce most of the Official Silver coins in the world.  In 2015, the combined total of Silver Eagles and Silver Maples sales equaled 81.3 million ounces (Moz).  This is a stunning amount as their total sales in 2001 were only 9.2 Moz: 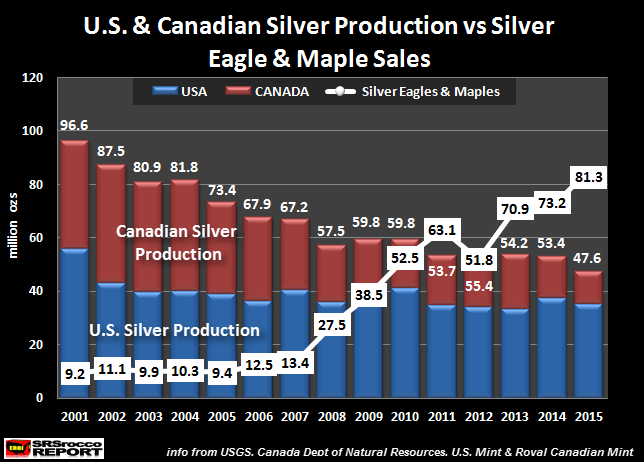 This chart was first published in my THE SILVER CHART REPORT.  It was one of 48 charts in the report on five sections of the Global Silver Market & Industry. 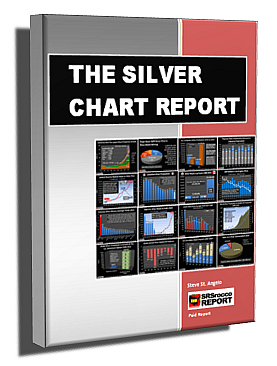 As the price of silver skyrockets during the next global financial collapse, the Silver Market will become one of the world’s most explosive markets in the future.

The Silver Chart Report is a must-read for the new and experienced precious metals investor. Most analysts focus on a certain area or sector of the silver market.

However, the information in this report illuminates a holistic view of many sectors of the silver industry, capturing the relationships that connect many parts of the market.

CLICK HERE to lean more about THE SILVER CHART REPORT.

As the chart above shows, U.S. and Canada had to import nearly 34 Moz of silver in 2015 just to supply the surging Silver Eagle & Maple demand of 81.3 Moz, as their combined silver production of 47.6 Moz fell significantly short.  This was a huge change since 2001, as the U.S. and Canada had 87.4 Moz of their domestic silver mine supply remaining after 9.2 Moz went to their U.S. Eagle and Maple sales.

If we add the revised Silver Bar demand published in the 2016 World Silver Survey, now including “Private silver bars & rounds”, this would be the result: 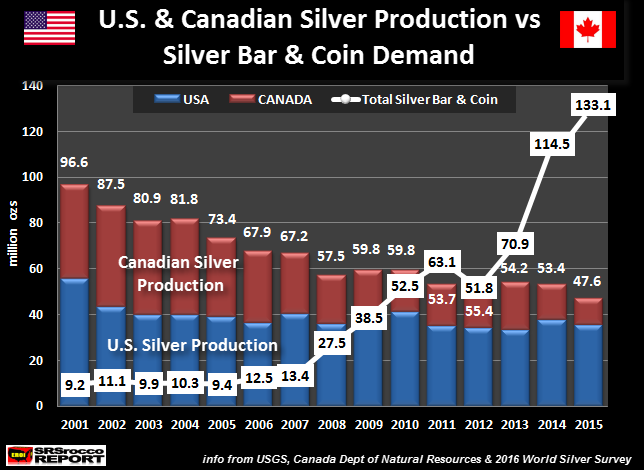 I only revised the data for 2014 and 2015 which includes Silver Bar demand.  I could not revise the data for 2001-2013 as there isn’t enough detailed information in the World Silver Surveys to provide accurate figures.  However, we can now see just how much more physical silver investment demand there is in the U.S. and Canada when we include Silver Bar demand.

If I take these figures, now including private silver bars and rounds, we can see the huge impact on domestic mine supply since 2001: 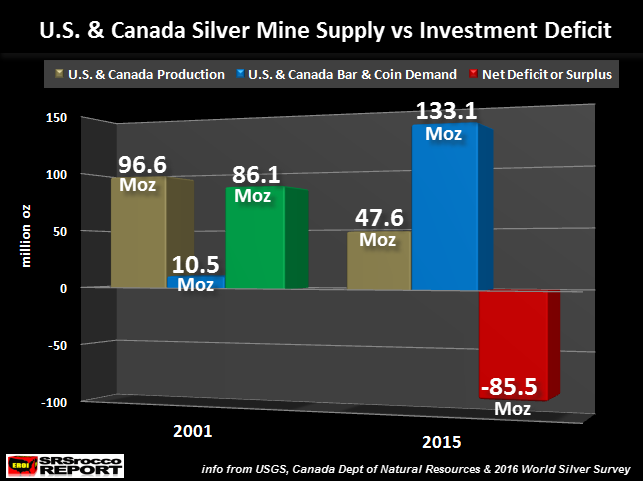 That being said, the U.S. and Canada suffered a 85.5 Moz net physical silver investment deficit.  Which means, these two countries had to import 85.5 Moz of silver just to supply Silver Bar & Coin demand.  This is a big deal if we compare the change since 2001. 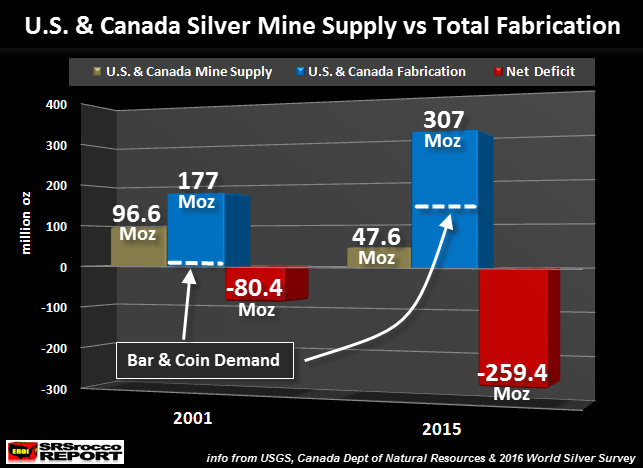 However, in 2015…. the situation changed drastically.  The 2016 World Silver Survey reports that total silver fabrication demand for these two countries was a staggering 307 Moz–Silver Bar & Coin demand accounted for 133 Moz (43% of the total).  Now that U.S. and Canadian domestic silver mine supply has fallen to only 47.6 Moz (in 2015), these two countries had to import nearly 260 Moz to supply all their silver needs.  This is more than three times what they had to import in 2001.

The United States and Canada will be in serious trouble when the world wakes up to the “SILVER STORY.”  When institutions and hedge funds start to move into silver in a big way, there just won’t be enough silver to go around.  The biggest squeeze will occur in the U.S. and Canadian market, where silver investment demand is now the highest in the world.

Unfortunately, the U.S. and Canada will not be able to import enough silver to supply all of its silver needs…. only at much higher prices.  Even then, I believe we are going to experience severe silver shortages.

Some analysts say there is no such thing as a shortage.  They claim that a higher price will satisfy any shortages.  While that makes sense in FINANCE 101, it won’t work in the real market as investment demand skyrockets.

For those investors who thought we would continue to see much higher silver prices in early Asian trading today or in the Western markets tomorrow, don’t forget that the bullion banks will likely defend the 50 MA of $20.50.  Here is Kitco’s silver chart showing early Asian trading: 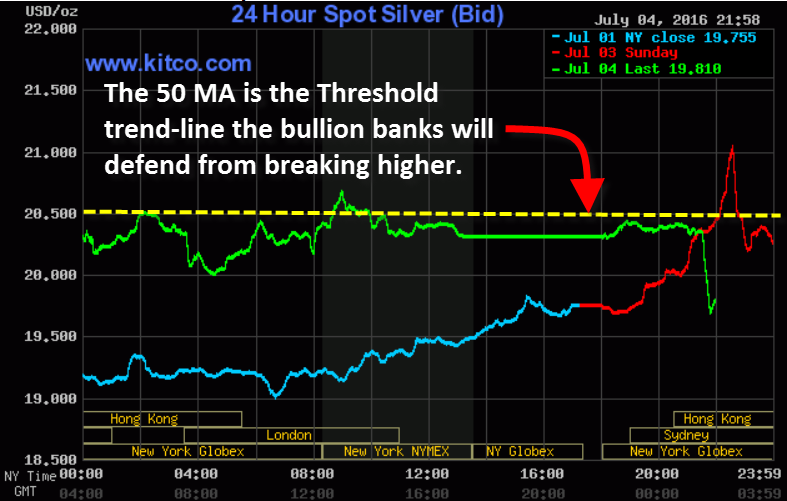 The yellow dotted line represents the $20.50 Threshold trend-line that I wrote about in my previous article, WATCH OUT If Silver Breaks Through This Threshold Line: 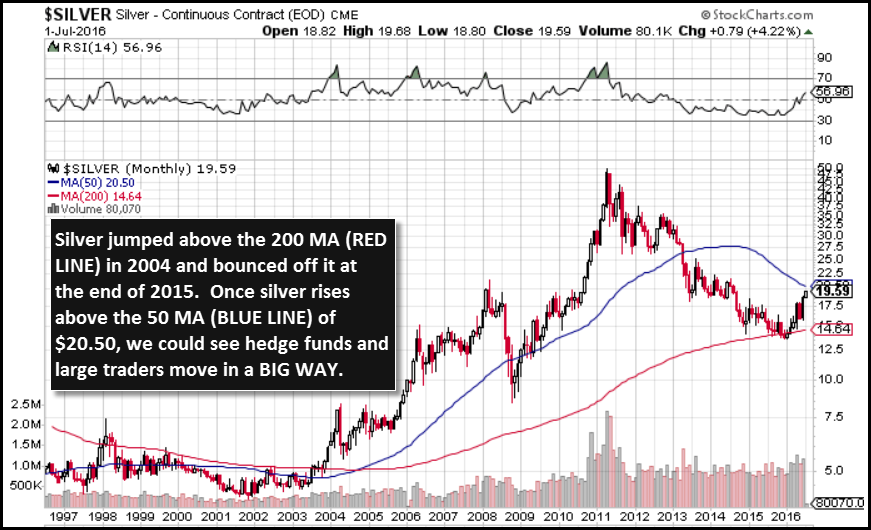 While I don’t pay much attention to short-term technical analysis, a lot of traders most certainly do.  Once silver closes well above that 50 MA (Blue Line), I believe we will see a lot more hedge funds and big investor pile into the silver market.  However, this is not something the Bullion banks would like to see as they are holding onto a lot of UNDERWATER short contracts.

So, don’t despair, as this is just part of the game.  At some point, an onslaught of traders moving into silver will totally overwhelm the bullion banks and we will finally see that Commercial Bank Short Squeeze from hell.  Investors need to realize that the Chinese who are now piling into Bitcoin, will likely make their way into silver.