North American silver investment via its domestic supply suffered another large deficit in 2015.
How big was the deficit?
It was HUGE…

It was huge, surging 70% compared to 2014… and this only includes silver investment from two Official coin sales. 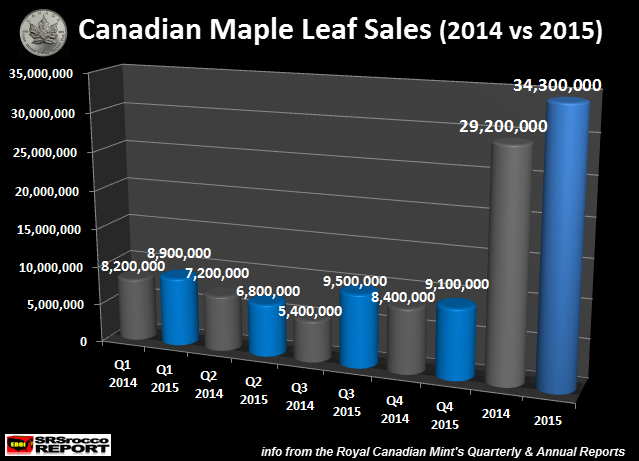 I discussed this in my THE SILVER CHART REPORT which was released in June 2015.  Here is CHART #37 of a total of 48 charts in the report:

Well, if you think 2014 was a banner year for the silver investment domestic supply deficit, take a look at my updated chart including the data for 2015:

Here we can see that total Silver Maples & Silver Eagles of 81.3 Moz is 33.7 Moz more than domestic silver mine supply of 47.6 Moz from the U.S. and Canada.  Moreover, this only includes the manufacture of these two Official Silver Coins.  This does not include the estimated 40-50 Moz of private rounds and bars now including in the 2016 World Silver Survey.

What a difference since 2001… AYE?  Total Silver Maple & Silver Eagle sales in 2001 were less than 10% of U.S. and Canadian Mine supply.  Thus, these two countries had plenty of silver to supply their investment needs that year.  However, the U.S. and Canada had to import 33.7 Moz in 2015 just to produce these two Official Silver coins.

While the U.S. and Canada can continue to import enough silver to meet its current needs, this may not be true in the future.