This will put total Silver Eagle sales for the first quarter at 15 million…the highest ever. 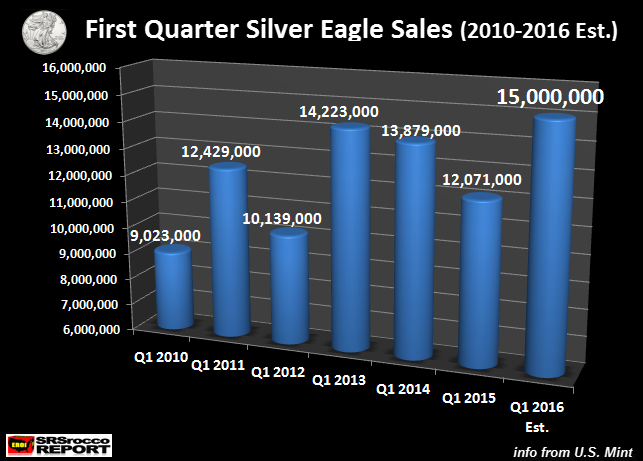 The last record was set in 2013 as the U.S. Mint sold 14.2 million Silver Eagles as the price of silver fell from $32 down to $25 in the first three months of the year.  Regardless, the Authorized Purchasers have been on a one million week allocation for the past two months, so there was no way to acquire more Silver Eagles.

Demand for Silver Eagles this year has hit a record due to deteriorated market conditions.  Even though the Dow Jones Index has added 2,000 points from its low last month at 15,500, this is not a sustainable rally.  Each day, there are more indicators pointing to a worsening economic fundamentals.

Total Silver Eagle sales in 2016 could easily reach 50 million and possibly 55 million if demand remains strong for the remainder of the year.

I believe a certain amount of investors understand that nothing has been fixed in the financial system since the collapse of U.S. Investment Banking and Housing Market in 2008.  This is why we continue to see record buying of Silver Eagles.

I published this chart in a prior article, but it’s worth taking another look… especially if you haven’t seen it yet.  What is interesting about this chart is that cumulative physical Silver Bar & Coin demand is higher in the past four years even though the price has fallen in half: 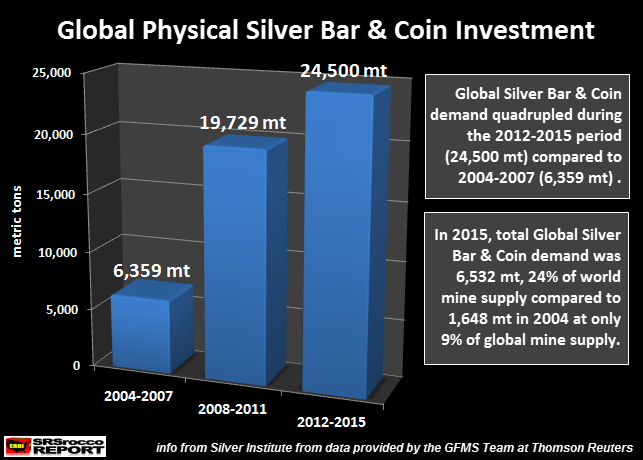