The message here is simple: It’s Game On.
The legacy media has taken the gloves off entirely and we are now engaged in all out media war.

Before I get into the meat of this article, I want to remind you of a few paragraphs I wrote back in the August post,  Questioning Hillary’s Health is Not Conspiracy Theory:

This is an incredibly big deal, and the mainstream media intuitively knows what it means. It means a total loss of legitimately, prestige and power. All of which is well deserved of course.

So here’s the bottom line. 2016 represents the true beginning of what I would call the Media Wars. Alternative media is now capable of driving the news cycle. Mainstream media now has no choice but to fight back, and fight back it will. It will fight back dirty. This is going to get very ugly, but by the time the dust has settled, I think much of the mainstream media will be left as a shell of its former self.

With Hillary’s loss, the mainstream media and its distressed and discredited allies are in a panic like we have never seen before. They understand that alternative voices now influence the public as much, if not more so, than the mainstream press, and they are now out to destroy those voices. The way they are going about this is by placing anti-establishment voices under the blanket umbrella of “fake news,” or in the case of Twitter, they just seem to purge people they don’t like from the platform altogether.

The gloves are now completely off following the publication, and wide distribution by legacy media, of a list compiled by Melissa Zimdars, an assistant professor of communication at Merrimack College in Massachusetts, of  “False, misleading, clickbait-y and satirical ‘news’ sources.” What you’ll find, is that some of your favorite websites, including Zerohedge are represented in this ridiculous list. 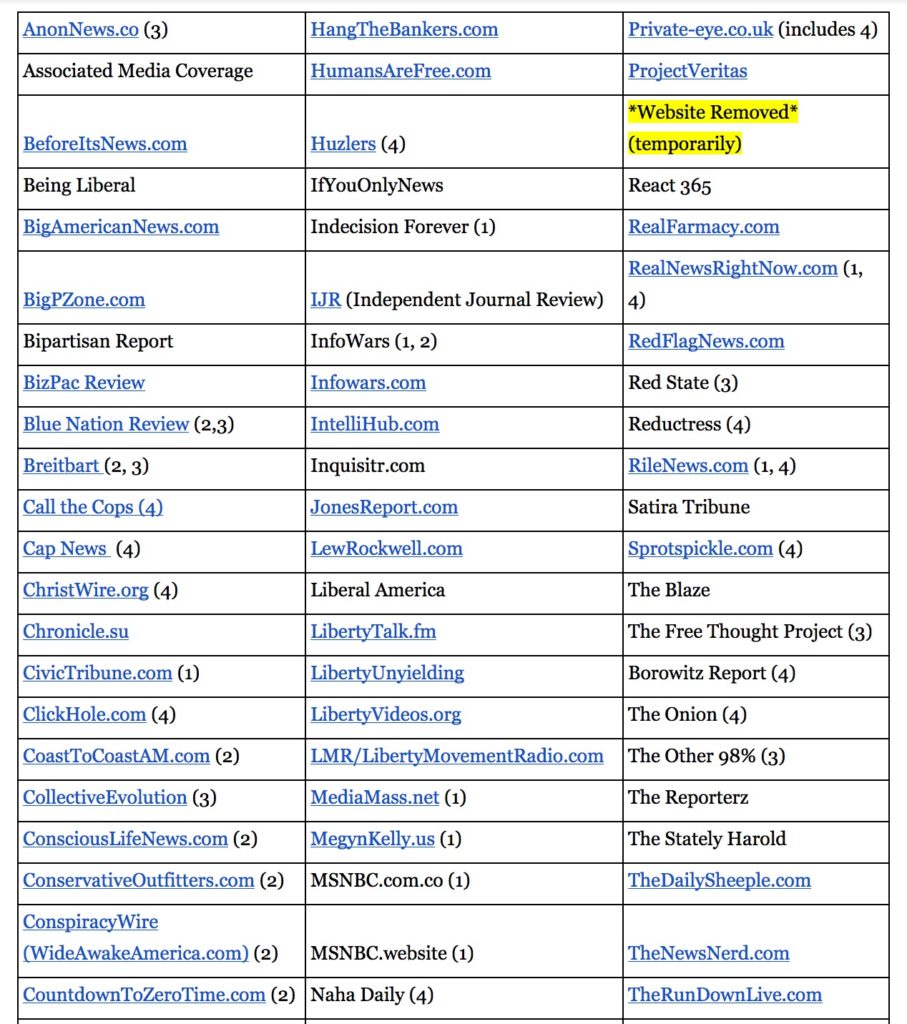 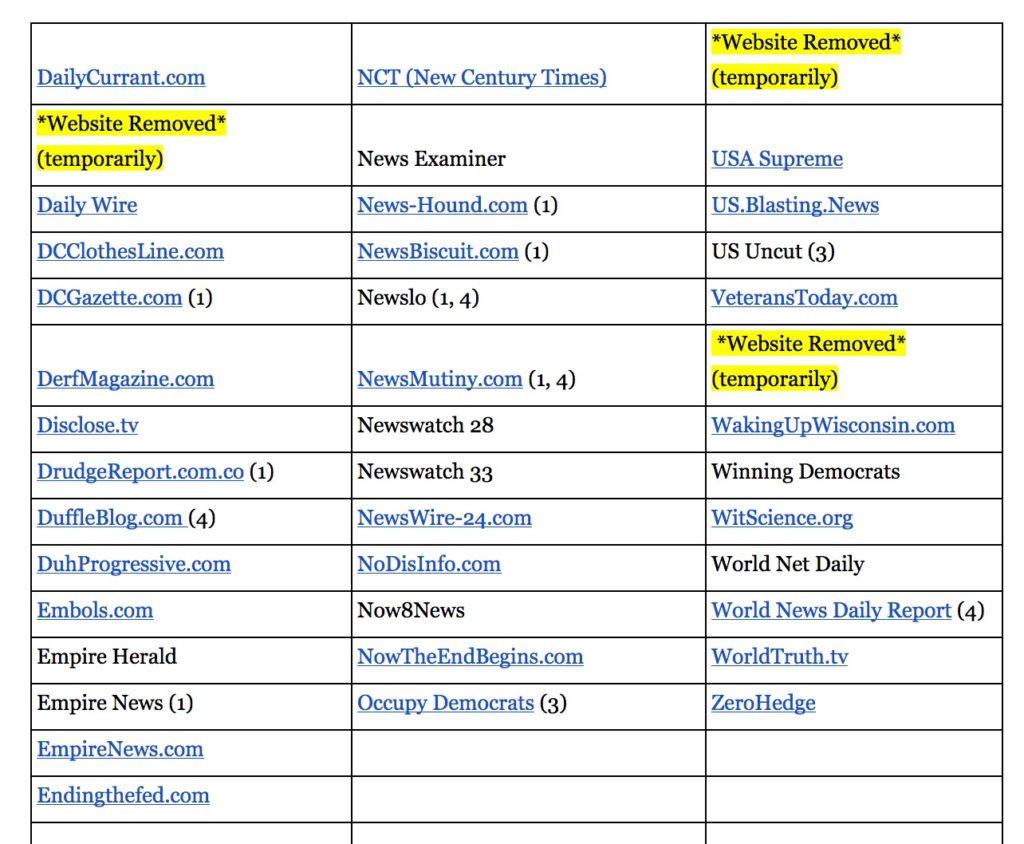 What do almost all of these sites have in common? They all published a lot of anti-Hillary Clinton articles over the course of the election, which collectively helped to swing the election for Trump. That is the real transgression of these websites.

Interestingly, I didn’t see Slate on this list despite publishing one of the most blatant pieces of fake, pro-Hillary news propaganda of the year just a few days before the election with the following, quickly debunked, monstrosity:

Even Snopes rapidly dismissed the claim, yet Slate is nowhere to be seen on the “fake news” list. If you are pro-Hillary, you apparently cannot be “fake, misleading, or clickbait-y.” The only “liberal” pro-Hillary site I could find on the list was MSNBC, which is pretty amusing in its own right.

This whole story hits close to home for me. Zerohedge has been publishing my writing since 2010, years before I had my own website. It has been instrumental in providing an outlet for my own voice, as well as countless others, when legacy media never would. As such, I reached out to Zerohedge for a comment. Here is what they said:

It’s funny and sad at the same time – have they done any actual rigorous analysis on what they determine to be “fake” news, or perhaps the assumption is that the public should just take their word again… like when the NYT assured its readers that Hillary Clinton had a 90% chance of winning? When it comes to “fake vs fact” on Zero Hedge, we have a simple solution: we source everything, and all the data can be replicated by anyone.

Ultimately this push will likely boost traffic to the “fake” websites – something the “credible” legacy media, which just had its worst year ever, desperately needs.

But what is more troubling is that this sets the framework for “banned media”, especially  when one considers it was the outspoken “liberal” voices within the 4thestate who were in arms that Trump would unleash precisely this kind of media witch hunt. Apparently the objective media does not need a president to prompt it to start its own book burning project.

Moving along, who cares that some assistant professor made a list of sites she doesn’t like and warns people about them. Why should we even care? We should care because it is being promoted heavily by the mainstream media. For example look at how a writer at NY Magazinepromoted the list: 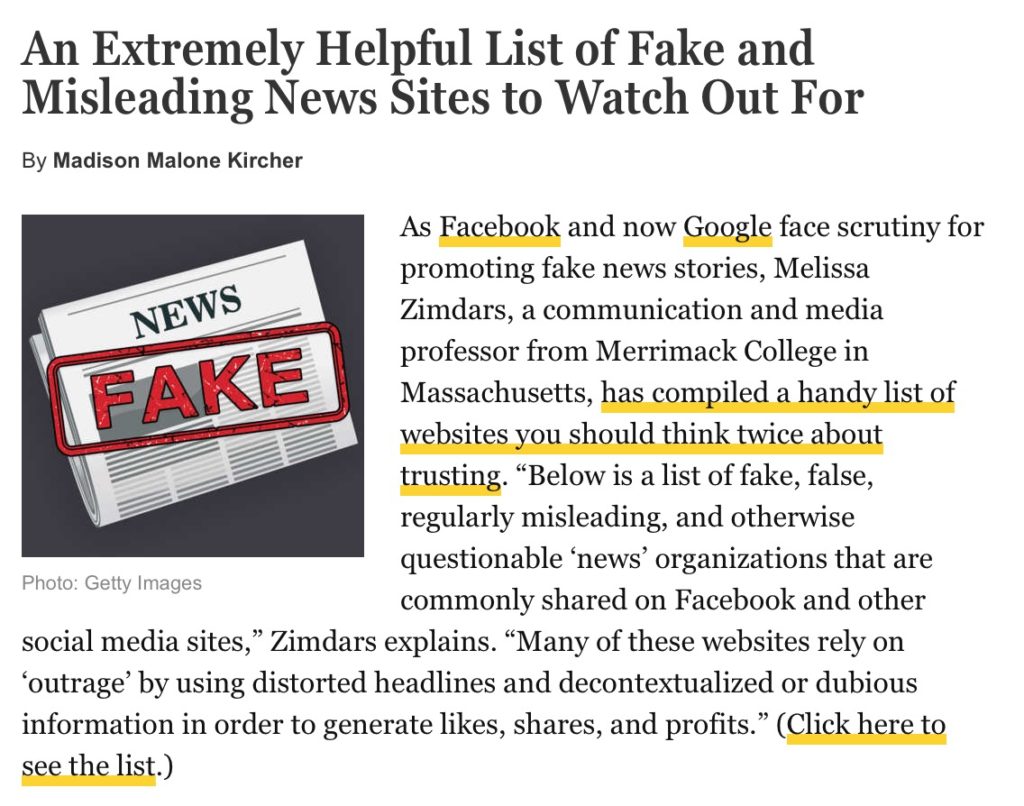 This is as close as you can get to a publication totally endorsing the list. Moreover, the story is currently the #1 most read article on NY Magazine’s website today. 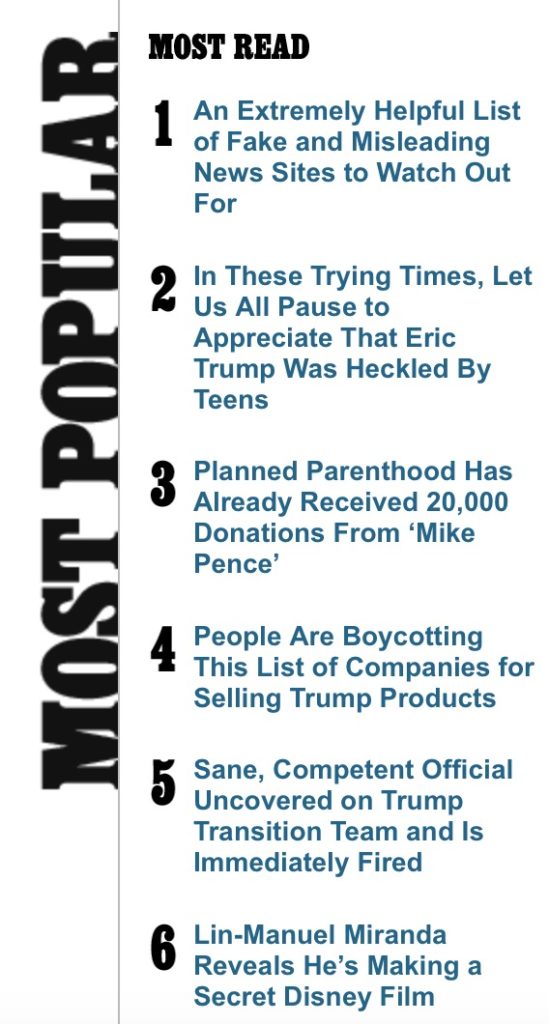 It’s not just NY Magazine though. The Los Angeles Times today published an article titled,Want to keep fake news out of your newsfeed? College professor creates list of sites to avoid. Here’s how it begins:

During the election, many people fell prey to fake news stories on social media — even the president-elect ended up retweeting fake statistics. A professor of communication has created a list of unreliable news sites to help people do better.

Melissa Zimdars, an assistant professor of communication at Merrimack College in Massachusetts, put together a publicly available Google doc cataloging “False, misleading, clickbait-y and satirical ‘news’ sources.” It’s been making the rounds on social media as people seek to cleanse their newsfeeds of misinformation.

The article then ends with the following:

Both Facebook and Google have recently announced they will take steps to block fake news sites from accessing their advertising services.

One has to wonder what sort of criteria Facebook and Google will be using, and if it ends up with anything resembling the above list, we should all be very concerned.

It’s not as if these mainstream media outlets are promoting this list to sow doubts in the sites’ already existing readers, but rather to keep their own readers away. It’s a nefarious attempt of preventing current readers from being open to alternative information, and we should all hope it fails miserably.

Of course, this is just one battle in the status quo’s attempt to silence alternative voices. Twitter is on its own mission following Hillary Clinton’s election loss. As USA Today reported this morning in its post, Twitter Suspends Alt-Right Accounts:

SAN FRANCISCO — Twitter suspended a number of accounts associated with the alt-right movement, the same day the social media service said it would crack down on hate speech.

Among those suspended was Richard Spencer, who runs an alt-right think tank and had a verified account on Twitter.

The alt-right, a loosely organized group that espouses white nationalism, emerged as a counterpoint to mainstream conservatism and has flourished online. Spencer has said he wants blacks, Asians, Hispanics and Jews removed from the U.S.

Heidi Beirich, spokeswoman for the Southern Poverty Law Center, told USA TODAY that the center had asked Twitter to remove more than 100 accounts of white supremacists who violated Twitter’s terms of service. She also pointed to two alt-right accounts that had been verified by Twitter, including Spencer’s.

Spencer doesn’t seem to be a nice guy, and Twitter can do whatever it wants, but what concerns me is the overall trend, and the information gatekeepers’ sudden panic to demonize or ban alternative voices following Trump’s election victory.

The message here is simple: It’s Game On. The legacy media has taken the gloves off entirely and we are now engaged in all out media war.