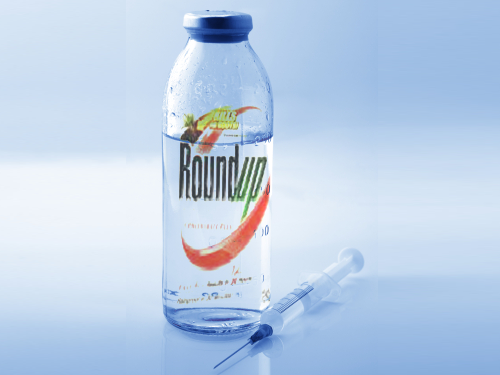 
Research scientist Anthony Samsel has confirmed that glyphosate, a key active chemical in Monsanto’s herbicide Roundup®, has been found in most vaccines!

In this video, we hear Dr Samsel reciting his findings.

Additionally, Dr Samsel sent a letter to his Congressional Senator from New Hampshire wherein he gives Senator Shaheen permission to share his laboratory data on glyphosate-contaminated vaccines with “all members of Congress and the public.” 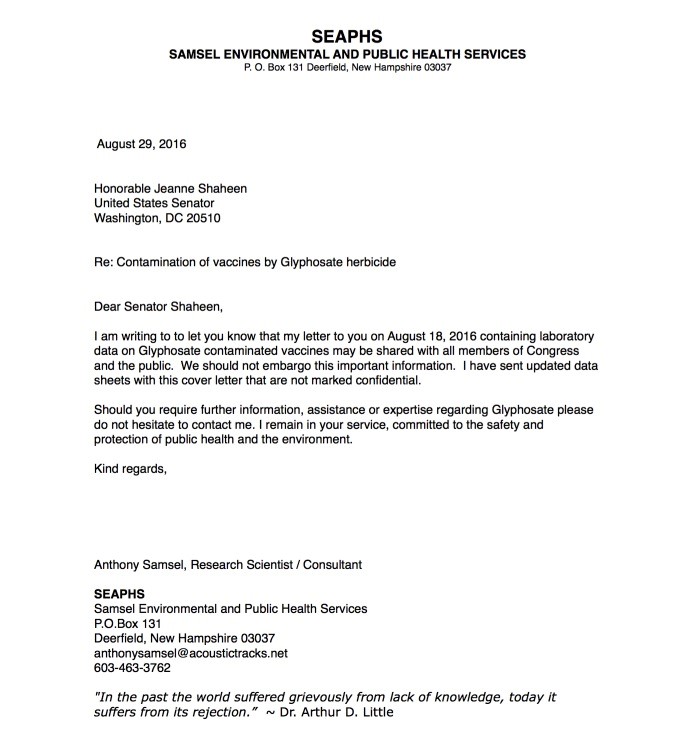 What will Senator Shaheen do?

Will she have the presence of conscience to do what U.S. Congressman Bill Posey of Florida did when, in July of 2015, he went before Congress to ask for a congressional investigation into the science, fraud and collusion regarding the MMR vaccine—Autism connection found in African-American boys under three years of age, as exposed in 2014 by CDC epidemiologist William Thompson, PhD, one of the co-authors of the CDC report which eliminated that pertinent data and documentation from the CDC’s published information?

One of the most important biochemical reasons for getting to the ‘bottom’ of the glyphosate fiasco being perpetrated upon U.S. and global citizens by the chemical and agricultural industries is that glyphosate is supposedly ‘safe’!   Nothing is further from the scientific facts.

Here is one specific reason:

Not only are humans exposed to glyphosate from numerous sources, e.g., herbicides, pesticides, sprays, GMO-crops/foods/ingredients in processed foods as RESIDUES, we now have confirmed scientific research and numerical data that glyphosate is present in VACCINES, which are injected into infants, toddlers, teens, and adults?

Compounding the above science is the fact that no one at the U.S. CDC/FDA even is considering the most elemental scientific theorem: chemical interaction, e.g., vaccine ingredients and giving nine vaccines at one time!

In high school chemistry aren’t students taught the importance of chemical interactions, especially when mixing several chemicals in a laboratory beaker? What can happen? An explosion! A similar chemical reaction occurs within the human body — the largest living, working test tube on earth, however it causes adverse health effects, not an explosion.

And yet those who should know how science and chemicals work synergistically continue to pollute the human organism with more and more toxins, including nanoparticles which also are in vaccines!

As “defense” for the above statements I have made, I direct readers to the 2014 published article “Major Pesticides Are More Toxic to Human Cells Than Their Declared Active Principles” and what’s stated in the Abstract:

Pesticides are used throughout the world as mixtures called formulations. They contain adjuvants, which are often kept confidential and are called inerts by the manufacturing companies, plus a declared active principle, which is usually tested alone. We tested the toxicity of 9 pesticides, comparing active principles and their formulations, on three human cell lines (HepG2, HEK293, and JEG3). Glyphosate, isoproturon, fluroxypyr, pirimicarb, imidacloprid, acetamiprid, tebuconazole, epoxiconazole, and prochloraz constitute, respectively, the active principles of 3 major herbicides, 3 insecticides, and 3 fungicides. We measured mitochondrial activities, membrane degradations, and caspases 3/7 activities. Fungicides were the most toxic from concentrations 300–600 times lower than agricultural dilutions, followed by herbicides and then insecticides, with very similar profiles in all cell types. Despite its relatively benign reputation, Roundup was among the most toxic herbicides and insecticides tested. Most importantly, 8 formulations out of 9 were up to one thousand times more toxic than their active principles. Our results challenge the relevance of the acceptable daily intake for pesticides because this norm is calculated from the toxicity of the active principle alone. Chronic tests on pesticides may not reflect relevant environmental exposures if only one ingredient of these mixtures is tested alone.

However, glyphosate can be only the ‘tip of the iceberg’ because according to researchers investigating “formulations as mixtures,” “Since pesticides are always used with adjuvants [the same as vaccines use adjuvants] that could change their toxicity, the necessity to assess their whole formulations as mixtures becomes obvious.” [1]

Although the above articles talk about pesticides, I think everyone regards “pesticides” as any chemical in that category as a “bug killer” or “insect killer.”

Pesticides are a class of chemicals designed to kill pests (rodents, insects, or plants) that may affect agricultural crops or carry diseases like malaria and typhus. [2] [CJF emphasis]

The fact that those chemicals are designed TO KILL indicates the harms they can do to any LIVING organism, regardless of exposure or dilution! There are some man-made chemicals that can be diluted to the ratio equivalent of a whiskey-shot-glass of chemical to a large swimming pool of water and still be deadly!

Why there are so many toxic chemicals deliberately placed into vaccines defies my knowledge of science, medicine, nutrition, research, and human empathy on the part of those who are supposed to be ‘protectors of health’, the medical profession, i.e., doctors, nurses, researchers, and the pharmaceutical industry.

Granted, there are some medical professionals who do not partake in the poisoning of children and expose the chemical horrors of vaccines but they are vilified, even some supposedly may have been “offed” for their expository work.

Now we have more and definitive confirmation that glyphosate is in most vaccines that are given to infants and children.

What more proof do we need for Congress, including the President of the USA if black lives matter, to demand and to perform an independent, thorough investigation (and/or criminal trial) with outside independent researchers testifying — not Big Pharma’s lackey scientists — to get to the bottom of why so many children are being chemically abused — legally too! — and why humanity’s future generations are being deprived of life, liberty and the pursuit of happiness.

What’s happened to the Nuremberg Code [3]?

Everyone talks about and demands their “human rights” [4], however, the most fundamental of human rights, i.e., not being poisoned daily [air, water and food] or by mandatory vaccine injections, are not being addressed and guaranteed by anyone. Why? Shouldn’t we make that a primary issue and right, especially in view of the CDC’s proposed rule to forcefully place citizens into quarantine and receive vaccines ‘irregardless’ with the CDC’s self-assumed rule making now that we know glyphosate is in vaccines?