Wish us luck… if we don’t win it is not going to be a fun time.

The buzzword “fake news” has popped into the popular lexicon in recent weeks.

We’ve been using that term for years, though, when referring to the mainstream media.

While poll numbers show that about 9 out of 10 people don’t trust the information they get from the mainstream media, they likely still have no idea just how fake it all is.

As someone who travels the world, I often walk by a television program and it’s called program for a reason, with the local media and can’t even believe what I am seeing or hearing.

And, the US and every other Western media is no different.

It is literally top down propaganda and bears little to no resemblance of reality.  And, if there is any truth to it, it is so highly skewed to the local agenda that it really should be labelled as fiction.

Meanwhile, on the internet, millions of people worldwide have been easily debunking and exposing nearly all the mainstream propaganda.

And, for this reason, the US and European governments have taken a play out of Orwell’s book and decided to label the real information as “fake”… and as governments often do, they’re going to use violence (government law) to try to force it out of existence. 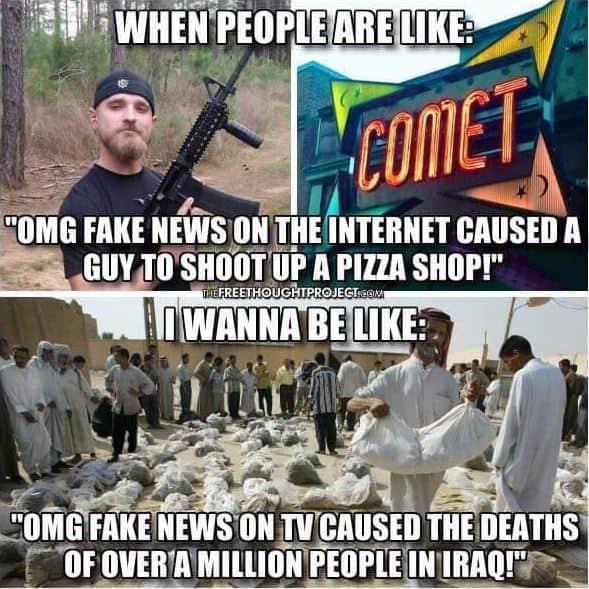 Censorship is a government affair and has been initiated most forcefully by the European Union and is being carried out by the world’s largest social networks. These networks including, Google, Twitter, Microsoft and Facebook have announced plans to create a censorship database in 2017 to remove “extremist content,” mostly at the request of the EU.

The idea is to damp down “hate speech” that makes readers uncomfortable and remove material that can encourage terrorism.

Of course there is no evidence that “hate speech” has negative effects if people choose not to expose themselves to the media that contains it. And the evidence shows that Western countries have done a lot to build up the very “terrorism” that the European Union is now so worried about eradicating.

Western governments have been steadily losing control of communications and hope that by pressuring large internet-information companies to build databases to control communications, they can regain power they feel slipping away.

In the US, censorship is being advanced mostly by legislative efforts. The legislation is being justified by the rise of “fake news” supposedly being spread by Russia to influence Western political processes.

The European initiative is more widespread and generalized.  It is threatening US sites with immediate legal action if they don’t generate meaningful and systematic removal of all “fake news” and “hate speech.”

Over time, US legislative efforts and EU “non-legislative” ones will converge and censorship will involve both company-wide initiatives and legal ones.

According to Yahoo News, the combined, non-legislative database will be put in place early in 2017 and eventually will include companies other than the initial four. The companies will utilize ‘hashes’ – digital “fingerprints” assigned to videos or photos of extremist content.  These hashes will then alert other vendors to remove the content.

But, what is really going on, is that too much truth is getting out.

Truth about how every war the US has been involved in in the last century was based on a false flag attack or outright lies… the same lies the mainstream media parroted and continues to parrot.  Truth about who was really behind 9/11.  Truth about the global warming fraud. Truth about the satanic rituals and child molestation at the highest levels of government and the elites as is currently being exposed via Pizzagate.

And we could go on for pages…

In order to continue to stay informed, many of those who are enlightened enough to recognize the truth about popular social media platforms have sought out alternatives.

Just as people looking for alternatives to the central banking fiat currency system, have sought out blockchain based bitcoin, all manner of new decentralized blockchain applications have begun to flourish.

One is called Steemit.com.  It’s a blockchain based social media site.  Because it is on a blockchain it cannot be censored.

The Dollar Vigilante has been on the site nearly since its launch earlier this year and we post all our content there.  You can see our page here.

Google may be able to make sure no one finds TDV when they search.  And Youtube and Facebook can make it so you never see our videos or posts.

And for this reason we post all our content there first.  And, as another benefit of using Steem, you actually make money from your participation on the site.  We’ve actually accrued over $30,000 just for posting our content since July.  I suggest everyone who cares about truth and freedom begin using Steemit instead of Facebook as soon as possible.

TDV has been the biggest proponent of blockchain technologies in the financial space, having been covering and recommending bitcoin since it was $3 in 2011.  We’ve since featured numerous other cryptocurrencies that have risen hundreds and thousands of percent.

You can find out more and get a special discount on our newsletter and our book, Bitcoin Basics, by clicking here.

Plus, come to Anarchapulco in the last week of February where many of the biggest names and brightest minds in the blockchain and cryptocurrency space will be speaking, including the founder of Steemit, Dan Larimer.

Wish us luck… if we don’t win it is not going to be a fun time.