Though North Korea’s nuclear and ballistic missile capabilities remain shrouded in mystery, some experts believe it may be possible for the country’s KN-08 missile system to deliver a nuclear warhead to U.S. shores.

Whether it’s just more posturing by North Korea or a real threat of war, the rhetoric coming out of the rogue state is getting ever more brazen.

North Korea just stated that it is in the final stages of developing a nuclear weapon capable of reaching parts of the U.S. It won’t happen!

Within weeks the 45th President would see his first potential global crisis as the Communist country began the testing of both nuclear weapons and the inter-continental ballistic missiles that could deliver them to their targets.

Tensions continued to rise as Trump began a naval mobilization of three fully loaded carrier strike groups to the region, signaling that the United States would no longer follow the “patient diplomacy” policies of his predecessors. Even China  reportedly mobilized 150,000 troops to their border, followed by a similar Russian mobilization.

One would think that the threat of total annihilation by the U.S. military would be enough to deter the North Korean leadership, but Kim Jong Un seemingly refuses to back down.

As reported by Foreign Policy magazine, a press release from state-controlled Rodong Sinmun newspaper makes it clear that the North is prepared to engage in all-out war:

“Trump blustered early this year that the DPRK’s final access to a nuclear weapon that can reach the U.S. mainland will never happen.

But the strategic weapons tests conducted by the DPRK clearly proved that the time of its ICBM test is not a long way off at all.”

And, in case that wasn’t perfectly clear, the article also stated: “The DPRK is about 10,400 km far away from New York. But this is just not a long distance for its strike today.”

North Korea wasn’t ready in January to test an ICBM. That now seems to have changed. 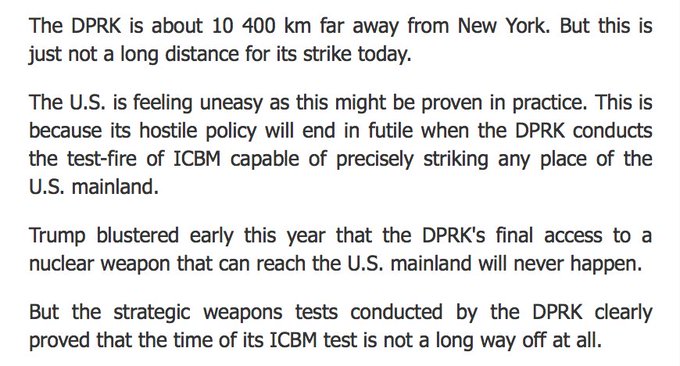 This is really some remarkable trolling of Trump by North Korea.

Though North Korea’s nuclear and ballistic missile capabilities remain shrouded in mystery, some experts believe it may be possible for the country’s KN-08 missile system to deliver a nuclear warhead to U.S. shores.

Whether such an attack would come in the form of a traditional mushroom cloud nuclear attack or a Super EMP pulse weapon remains a significant question for military planners in the United States.

As we’ve previously noted, any attack against the United States would likely be initiated by an electo-magnetic weapon that targets the power grid of the 48 contiguous states.

Such an attack, say over the central United States, if successful, could lead to some 90% of America’s population being wiped out within one year’s time as a result of starvation and internal violence.

President Trump seems to be taking the threat seriously, because three carrier strike groups sitting just off the coast of North Korea suggests a war may be imminent.

Earlier this year Russian President Vladimir Putin warned that the situation on the Korean Peninsula has seriously deteriorated and could rapidly escalate to war.