/  Headlines  /  World News  /  Is There a Coup Attempt Underway in America?

There are a plethora of things to be deeply concerned about when it comes to Trump, yet the coup attempt against him being launched by elements of the deep state, corporate media and Hillary dead-ender Democrats is more concerning still. It’s obvious that what’s happening right now is not a sincere attempt to hold a President accountable or fight him on policy or personnel choices. Rather, this all seems to be a very deliberate and premeditated attempt to remove him from office.

Personally, I’m horrified by the fact that Goldman Sachs goons are in total control of the Trump administration’s economic policy. I’m also horrified that our new President’s first overseas trip will be to the terrorist state of Saudi Arabia, a autocratic, brutal monarchy with undeniable ties to 9/11. I’m likewise disgusted by Attorney General Jefferson Sessions’ oppressive and uncivilized relaunch of the misguided and disastrous “war on drugs.” Finally, I’m very troubled by the fact Mike Flynn attempted to disrupt a military operation using Syrian Kurds to rout ISIS in Raqqa because Turkey didn’t like it, given he was working as a paid agent of Turkey months earlier and never disclosed it.

There are a plethora of things to be deeply concerned about when it comes to Trump, yet the coup attempt against him being launched by elements of the deep state, corporate media and Hillary dead-ender Democrats is more concerning still. It’s obvious what’s happening right now is not a sincere attempt to hold a President accountable, or fight him on policy or personnel choices. Rather, this all seems to be a very deliberate and premeditated attempt to remove him from office.

What’s so troubling about what I just wrote is not so much that I think it, but that it’s becoming accepted truth by a growing number of mainstream Americans. For example, can you believe CNBC actually published a post with the following title? 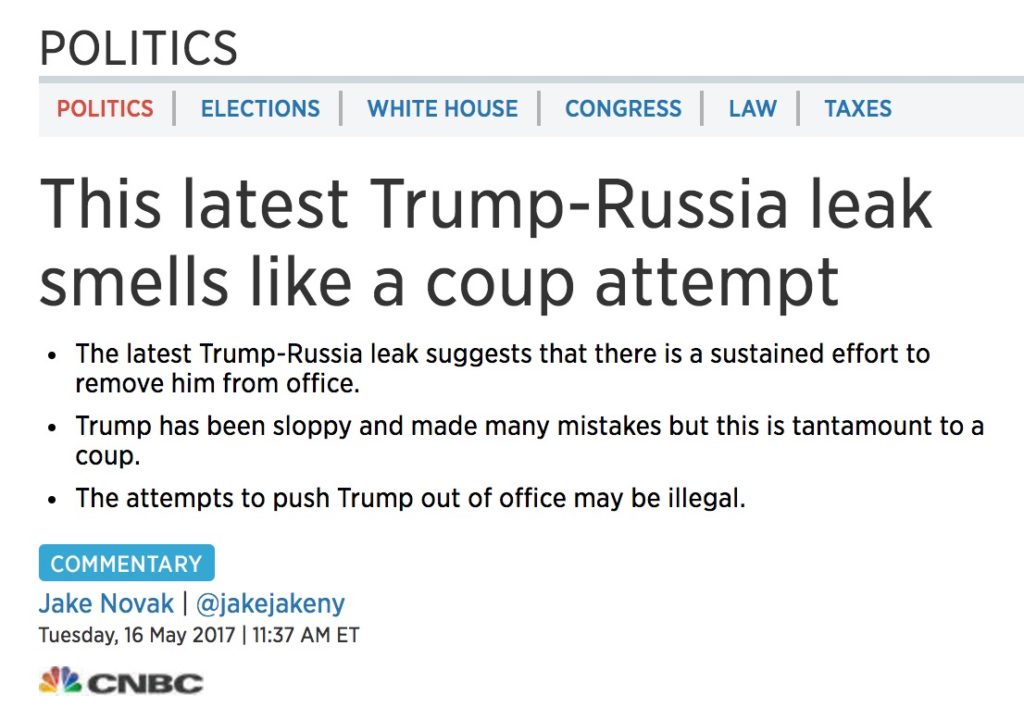 Here are a few excerpts from the piece:

There is, indeed, a bombshell of a story coming out of the news that President Donald Trump revealed sensitive information during his White House meeting with Russian officials last week. But it’s not that President Trump committed any crime. The really alarming news is that the duly-elected President of the United States appears to be the target of a political coup.

First, let’s be clear: President Trump has been sloppy, arrogant, and just plain misguided plenty of times during his short tenure in office — including the way he handled the firing of FBI Director James Comey and the hiring and firing of National Security Adviser Michael Flynn. And if he did unnecessarily compromise the source of the sensitive information he shared with the Russians, shame on him.

Here’s the kicker: None of this is actually working where it counts. Again, we have not one piece of evidence of any impeachable act. And it’s not even truly working in the polls. President Trump’s approval ratings may be lower than any modern president this early in his tenure, but they’re still higher than they were throughout the election. If anything, these constant attacks coming from this obviously angry and potentially illegal place are only strengthening the resolve of Trump’s base of supporters. They elected a guy they believed was truly the enemy of the established political class. And right on cue, the established political class is stopping at nothing to prove them right.

For all the things President Trump has said that have dragged down the level of our American political discourse, this sustained takedown effort is worse. And it’s not clear how this is going to end. Unlike President Trump, the leakers remain anonymous and thus unaccountable. They can presumably go on forever. And President Trump doesn’t seem like he’s going to stop fighting back or irritating and threatening his political opponents.

But don’t fool yourself into thinking this is OK or even tolerable. The bottom line is that we have some very powerful people in Washington who really don’t like how democracy played out this time around and what they do to attack it next isn’t going to be any better than what they’re doing now.

Luckily the American people remain wisely circumspect about all of this. President Trump’s polls aside, the voters are still giving him a decent shot to govern. And unaccountable people in Washington shouldn’t be trying to make that decision for us.

Once again, I want to remind you the above was published at CNBC. Sure it’s a vapid Wall Street oligarch-worshipping rag, but it’s still pretty mainstream.

Moreover, it’s not just CNBC writers and obscure bloggers such as myself who are coming to these sorts of conclusions.

For example, listen closely to what Dennis Kucinich had to say on the topic in a recent interview.

I agree with Dennis completely, and another troubling aspect of all this is that the hysteria incessantly being driven by the corporate press in its attempt to destroy Trump is distracting attention away from genuine scandals. For example, yesterday’s McClatchy story on Mike Flynn’s undisclosed work as a agent of Turkey, and how that may have influenced his foreign policy recommendations appears to be a very real and extremely concerning scandal. Yet it gets buried in the hyperbole and hysteria, and millions of people end up tuning everything out.

The road we’re headed down is unhealthy, counterproductive and extremely dangerous. As is typically the case, you can thank the corporate press.

If you enjoyed this post, and want to contribute to genuine, independent media, consider visiting our Support Page.