Gold’s largest plunge in 14 months may soon reverse according to gold’s top forecaster in Q3 according to Bloomberg: 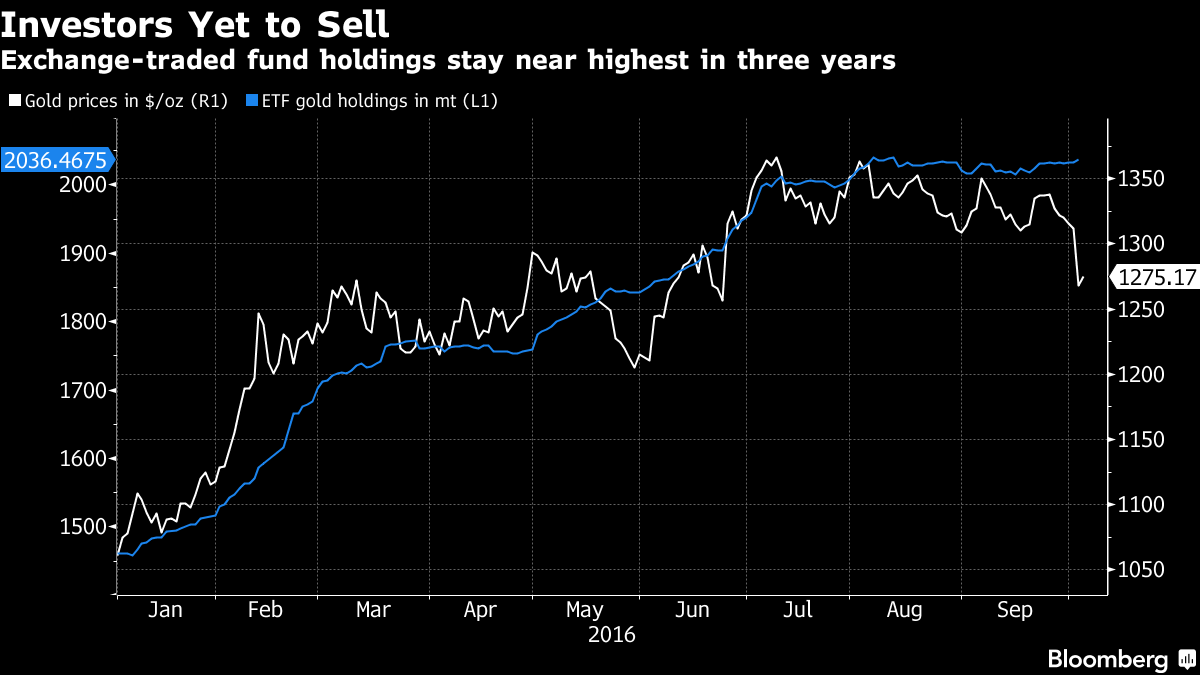 Looming risks from the U.S. presidential election in November to Britain starting talks to leave the European Union next year may boost its role as a haven, said Barnabas Gan, an economist at Oversea-Chinese Banking Corp. in Singapore. Increasing shale oil output in the U.S. is also likely to cool the surge in crude prices, curbing inflation, he said.

“As quickly as gold fell, as quickly gold could rally back,” Gan said in a report received Wednesday. “Weak inflationary pressures may once again lift gold prices back to their previous shine.” He was the most accurate forecaster of the metal in the third quarter, according to Bloomberg data.

Bullion slumped Tuesday on speculation that the period of easy monetary policy is ending. The European Central Bank was said to be building an informal consensus to wind down bond purchases gradually, while Federal Reserve officials called this week for higher U.S. borrowing costs amid signs of an improving economy. Oil prices have also been rising, stoking inflation worries and boosting the odds of a rate hike.

Little evidence has emerged of investors cutting holdings in exchange-traded funds. Assets climbed 3.1 metric tons to 2,036.5 tons Tuesday to hold near the highest level since 2013, data compiled by Bloomberg show.

Some further downward pressure is still expected in the near term from an eventual victory for Democrat Hillary Clinton in the presidential poll on Nov. 8, which would price the risk of dramatic policy uncertainty under Donald Trump out of the market, according to BMI Research. Over the long term, low real interest rates would ensure precious metals remain an attractive investment, it said in a report dated October 4.

Gold forecasting is a mugs game at the best of times but given the uncertain geo-political situation, the fragile banking system and the very strong fundamentals for gold, it is hard to argue with Barnabas Gan of OCBC  or BMI.

Gold should be meaningfully higher in the coming months and into 2017 as investors diversify into gold. Or rather we are likely to see dollars, euros, pounds and other fiat currencies continue to be devalued versus gold.