He then stated that the market “will remain at artificially high levels until January 1st”. This came not long after he slammed Fed chairwoman Janet Yellen in a CNBC interview when he told the interviewer that she should be “ashamed” of her “very political” and “false” market.

He then claimed that the reason interest rates wont be increased prior to the election is because Yellen and the Fed are trying to bolster Barack O’bomber’s legacy (or lack thereof).

It remains unclear whether or not Trump is being threatened into going along with the globalist plan or if he is just willingly complicit in furthering their agenda for personal gain. However, his statements in regard to Janet Yellen and the Fed’s decision to keep rates low for political purposes, give credence to the probability that this “legacy” accusation is merely half-truth propaganda. Its purpose is likely to provide an explanation to the sheeple for this particular step in the long walk toward global governance.

Wittingly or not, Donald Trump is perpetuating the false narrative that the Fed’s suppression of interest rates is solely for political purposes.  In reality, they have no choice but to keep rates low in order to prevent an immediate implosion of the very system they are propping up.

You see, the Elites are not far enough down their occult timeline for a total collapse. The Jubilee year doesn’t end until the beginning of October and thus this kind of political reasoning is a perfectly convenient excuse to keep the game going a little while longer until the time is right to send the world financial system into a full blown death spiral.

Since 2008 all the fed has done is artificially propped up asset prices through quantitative easing to increase the notional value of the stock market, something that has further decreased the buying power of average citizens through the hidden tax of inflation. It’s been called a “Goldilocks recovery” by economists for good reason – it’s a total fairy tale farce.

Just like many of the other sinister actions elites take against us plebs, they are probably laughing maniacally at our willingness to accept what were are told as the truth and likewise at our continued compliance with the erosion of our own liberty.

That is a pretty big issue to flip-flop on, especially with the grip of globalism growing tighter.

It’s evident through Donald Trump’s past statements and his guilty-by-association friend group that he is no stranger to the globalist’s ultimate end-game. Whether he’s praising the United Nations intentions and what they stand for or playing golf with ill-Bill Clinton, do you really think a guy with so much to lose would put his life and family on the line to saber-rattle with the banking elites? We doubt it. 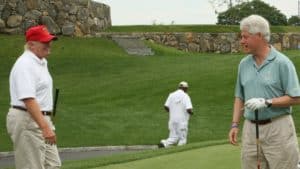 Just days after Trump slammed Yellen, his running mate Mike Pence said, “I think it’s hard to understand why the Fed continues to advance policies that really work for hedge fund managers on Wall Street, here in New York City, but really aren’t working for working families on Main Street. I think Donald Trump is saying that it’s time that we brought forward the kind of economic policies that will allow interest rates to return to a rational point.”

Even Pence is on board with the deception it seems. He certainly made a point of scapegoating hedge fund managers and Wall Street in New York City. If he actually wanted to address the root of the problem he would talk about the central banks including the Fed in more detail, rather than beating around the bush. He knows better than to tell it like it is, since doing so could be lethal.

Look at what happened to John F Kennedy when he attempted to stop the banksters. On June 4th, 1963, executive order 11110 was signed which once again gave the US treasury the constitutional power to issue currency to the people thus bypassing the Federal Reserve system. United States notes were then issued interest-free and debt-free in addition to being backed by silver reserves. It didn’t take long for the elite bankers to “take care” of this problem when the 35th president of the USSA  was shot dead in Dallas, Texas on November 22, 1963.

This was a warning and scare tactic directed toward anyone in the future who stands in opposition of the banking interests of the globalists. Instead of trying to fix this inherently broken financial system and getting directly in the line of fire, we are taking action to help build a better system alongside it. This way when the inevitable meltdown occurs we will already have the tools in place to survive and function.

At TDV we don’t speak in half-truths or perpetuate conspiracy theories. We simply make tactful investment decisions based on real numbers and potential outcomes. As a result of the uncertainty and volatility in the world markets, part of our strategy at TDV involves holding assets outside the monetary system like precious metals and cryptocurrencies.

Our senior analyst Ed Bugos’ carefully chosen portfolio is currently up around 200% this year, with individual picks and options up over 1000% in some cases. You won’t get returns like these by following your average financial advisor. If you want to learn more about our immensely profitable approach to investing, protect yourself in these turbulent financial times and gain access to a community of thousands of other like minded individuals, subscribe to TDV today (click here for more info).

With what is going on with Hillary starting to look like a sequel to Weekend At Bernies it is possible that Trump could actually win the election (if there is one… because if Hillary has to pull out for health reasons it may cause the election to be postponed or cancelled).

Would Trump truly attack the Federal Reserve as President?  If so, he might not want to take any open air car rides through downtown Dallas.  But, our feeling is that he would be just a different face on what will continue to be a tyrannical US federal government.  He has no intention to actually close the Federal Reserve and his only argument is that they should raise rates.

That’s like suggesting that a serial killer use a machete instead of gun.  The problem is that there is a serial killer in the first place.  Not how it does its dirty business.

In any case, we are setting up for one very interesting autumn season.  A lot of things will be changing… and the market doesn’t like a lot of change.  So, we’ll see if the Fed does prop up the market until January.  One thing is for sure, and Trump is right on, and that is that the markets have been falsely held up by the central banks… and once they no longer can or will do that it will take a dive that has likely never before been seen.