Trumponomics is a US dollar crisis in the making:

For the last eight years we’ve seen the rise of the Social Justice Warriors (SJW’s), as they had lobbied their man, Obama, for the political power required to direct the force of government in the name of their own peculiarly relativist brand of “social justice.”

While they are still busy demonstrating the violent soul of what is inherent in all brands of statism by breaking storefront windows (masked), under the Trump epoch a new type of statist “warrior” has emerged… let’s call them the Economic Justice Warriors (EJW’s).

Like the SJW’s, the EJW’s ultimately also want to direct the “force” of government in the name of justice, albeit slightly different. And, much like the SJW’s, this new form of economic justice isn’t just at all.  In fact, it is antithetical to the goals of the EJW’s.

One of the big rallying cries of the EJW’s has been to “build a wall” across an entire continent!

This is silly for a few reasons.

One is that there already is a wall across most of it… but all it takes to defeat a wall is a ladder or a shovel.  Or a boat.

But, even that is silly because there have been more Mexicans leaving the US than migrating there for the last five years (“More Mexicans Leaving the US Than Entering” – New York Times).    Most say they leave due to how unfree the Land of the Free is nowadays.

In fact, Americans may be building a wall that eventually will keep them in.  The IRS has just announced that it will be notifying the State Department of anyone with overdue extortion (tax) payments.  Anyone with overdue tax payments will not be given a passport to defect from the country.

Adding insult to injury on building this useless wall is Trump’s idea on how to “make Mexico pay for it”.  His way of “making Mexico pay for it” is to charge American’s 20% more on anything imported from Mexico.

Mexico is one of the biggest importers into the US and two of its biggest imports are petroleum and food… so get ready for food and gas to rise 20% in price in order to build a wall that is already mostly there and is useless. 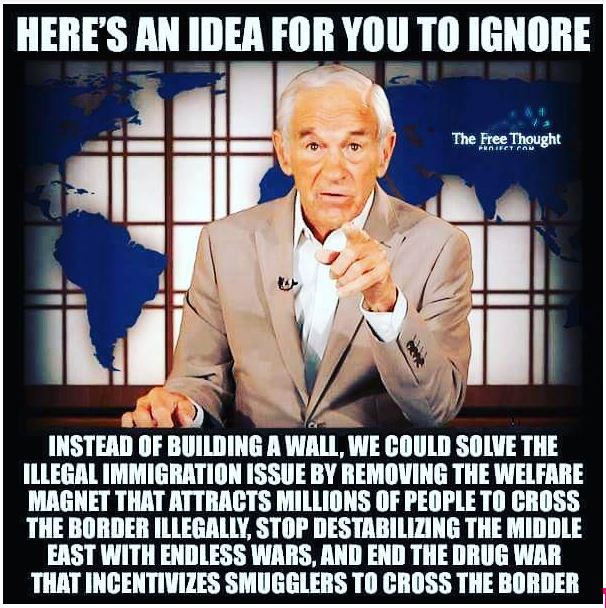 But, imposing tariffs on foreign imports and building walls isn’t just useless and increasing the cost of things for Americans.  It actually threatens to destroy the entire American economy.

TDV’s Senior Analyst wrote this in our last issue to subscribers:

Like most Americans, [Trump] is unaware of the role that international trade has played in developing wealth, not only for American corporations, but also, American consumers and the many countries engaged in it.

Ed points out that Trump doesn’t make the proper distinction between trade and globalism.

Besides failing to grasp the mutually beneficial nature of trade, he doesn’t understand the complexities involved in the balance of payments theory, which has long been discredited as an old mercantilist doctrine. He uses it to attempt to define who the winners and losers are in trade. But, Ed points out, the accounts are always in balance; the other side of a “trade deficit” is a “capital surplus.”

When enough money is put into American goods and services – and when people who trade with Americans also store their money in the US – the US can develop a “capital surplus.” As Ed explains, a country can have a trade deficit because its capital markets are attractive. It is after all trading financial claims for goods and services.

A country may also have a trade deficit if it prints more currency than its trading partner, but this kind of cheating tends to self correct via exchange rates eventually.

On the contrary, the US has had a “trade deficit” for as long as the US dollar has floated freely, and probably longer. Sometimes this is the result of its inflationist policy, but mostly it is because the US has always offered a relatively more attractive – i.e., more diverse and more liquid – and more politically stable capital market environment to store wealth.

That’s one of the ways the US dollar became a reserve currency – by offering a home for all those mercantilist governments around the world who would debase their own currencies in order to give their exporters an edge into the American market. How many times have you heard the argument about the Japanese or Chinese banks funding US deficits and consumers.

Yet this is precisely the kind of thing Trump thinks of as exploitation.

But America gained from it too. Because people all around the world wanted to trade with people in the US, its currency circulated broadly; in fact, combined with the beneficial aspects of trade on productivity it helped the Fed manage the fallout of its policies on local prices.

But Trump thinks having a trade deficit is a bad thing and wants to wipe it out. He will try to, and in the process he will do a lot of damage to the American economy, as Ed points out. For, by eliminating the trade deficit he will also eliminate the capital surplus, and reverse all the benefits that have accumulated not only to the economy, but also, the dollar over the decades.

Trump is wrong to target the trade deficit. Trade is not a win-lose concept. Nations are not necessarily better off because they export more physical goods than financial claims if there is a competitive advantage on each side discovered voluntarily in the market by entrepreneurs.

The policy will radically shrink America’s sphere of trade. It will lower labor productivity as a result, and real wages in the process. It may even more radically accelerate the dollar’s global demonetization (de-dollarization) as those who have traded with America over the years finally repatriate their dollars.

Just this week, Iran announced it will stop using the US dollar in response to Trump’s bans.

EJW’s think they are going to improve things in the US by limiting trade and enforcing tariffs and bans.  What they’ll get is the exact opposite.

Trumponomics is a US dollar crisis in the making.

Protecting Yourself From The Trump/EJW US Dollar Crisis

Given the precariousness associated with the US economy and Donald Trump, you will certainly want to keep your assets safe and well positioned to profit during the incoming turmoil.