Be first, Or Not at All…

Editor’s Note: Are the bank runs about to start in Europe?  This has long been the thought by many mainstream analysts.  Yes the ECB is engaging in active quantitative easing, but perhaps one of the biggest black swans of all would be that instead of bank runs starting across the pond, the runs start in our own back yard.  Be sure to check back Monday for an SD Exclusive article covering the actual freeze of accounts that are going to be executed in real time on late on July 31st and continuing through August 1st, 2017 within one of the cryptocurrencies most beloved exchanges.  So if you hold any Bitcoin in any of the exchanges, you might just want to check those terms and conditions, especially any changes, freezes, suspensions or inability to buy or sell coming down the pike on Monday and Tuesday.

By Mish Shedlock from MishTalk.com

If there is a run on the bank, any bank in the EU, you better be among the first to get your money out.

Although it’s your money, the EU wants to Freeze Accounts to Prevent Runs at Failing Banks.

European Union states are considering measures which would allow them to temporarily stop people withdrawing money from their accounts to prevent bank runs, an EU document reviewed by Reuters revealed.

The move is aimed at helping rescue lenders that are deemed failing or likely to fail, but critics say it could hit confidence and might even hasten withdrawals at the first rumors of a bank being in trouble.

The proposal, which has been in the works since the beginning of this year, comes less than two months after a run on deposits at Banco Popular contributed to the collapse of the Spanish lender.

Giving supervisors the power to temporarily block bank accounts at ailing lenders is “a feasible option,” a paper prepared by the Estonian presidency of the EU said, acknowledging that member states were divided on the issue.

EU countries which already allow a moratorium on bank payouts in insolvency procedures at national level, like Germany, support the measure, officials said.

“The desire is to prevent a bank run, so that when a bank is in a critical situation it is not pushed over the edge,” a person familiar with German government’s thinking said.

The Estonian proposal was discussed by EU envoys on July 13 but no decision was made, an EU official said. Discussions were due to continue in September. Approval of EU lawmakers would be required for any final decision.

Under the plan discussed by EU states, pay-outs could be suspended for five working days and the block could be extended to a maximum of 20 days in exceptional circumstances, the Estonian document said.

I side with Charlie Bannister of the Association for Financial Markets in Europe (AFME), who says “We strongly believe that this would incentivize depositors to run from a bank at an early stage.”

Here are a trillion reasons: Over €1 Trillion Nonperforming EU Loans: EU vs US Percentages. 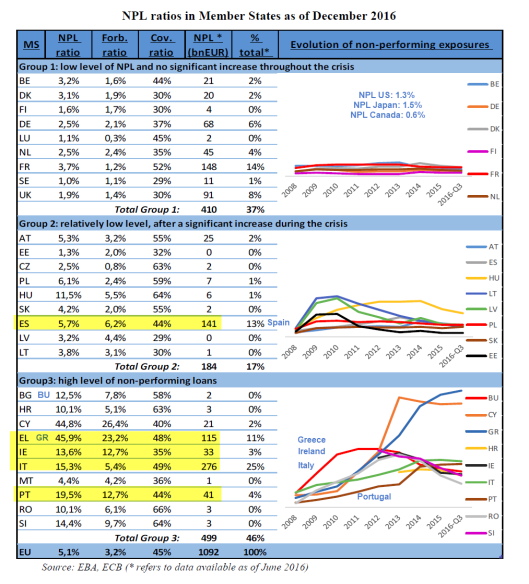 Italy, Greece, Spain, Portugal, and Ireland have a combined €606 billion in non-performing loans.

That the EU has to consider such drastic measures proves the point.