Here is our worst case scenario:

Rudi Fronk and Jim Anthony, co-founders of Seabridge Gold, discuss Deutsche Bank’s latest movements and what a bailout could look like. 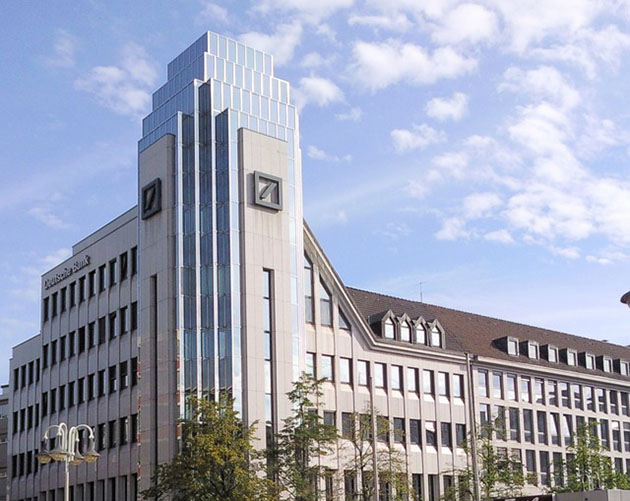 When financial systems begin to fail, the banks are always at the center. When your assets are mostly tied up in long-term, relatively illiquid transactions while your funding is mostly of the overnight variety, from depositors, money market funds and other banks, trouble is never far away. Banks are the perfect stress indicator within the system.

Deutsche Bank (DB) became the story last week as its $14 billion market cap would be wiped out by a proposed $14 billion fine from the U. S. Justice Department for various transgressions going back to the financial crisis.

Most expect the eventual settlement will be much less. For a better perspective, DB’s $14 billion market cap should be compared to its debt, which totals around $160 billion. The markets may not be able to pull apart a typically labyrinthine bank balance sheet, but extreme imbalances like this can be understood. To put this ratio in context, Citicorp, hardly a paragon of virtue, has a market cap of around $130 billion backing its debt of $163 billion.

The CEO of Deutsche Bank has a message for us: The balance sheet is strong, liquidity is more than adequate and there is no need of an equity infusion. He may be right, but does it matter? Once a bank loses confidence, the worst fears are almost always realized. Your stock falls, your bonds drop, depositors leave, other banks refuse to do business with you, and down you go. That’s the reality of a banking system dependent on the overnight interbank market and depositor funds to meet daily requirements.

Do you remember Lehman Brothers? On June 11, 2008, after moves to shore up the balance sheet and increase capital, Lehman CEO Dick Fuld assured us that “the worst is behind us.” But the market for mortgage-backed securities continued to weaken, rumors continued to fly, short sellers attacked its stock and debt and market confidence was lost. In the last week, Lehman stock fell from the high teens to pennies. JP Morgan pulled the plug on key banking lines and seized Lehman’s available collateral. The Fed refused to step in although it did save AIG and others. Less than three months after declaring victory, Lehman filed for bankruptcy on September 15. The results were nearly fatal to the financial system because Lehman was a key counter party to thousands of transactions and derivative contracts. If they had to do it again, the Fed would probably bail out Lehman.

With total liabilities of €1.736 trillion, DB is much larger than Lehman was and DB has a much larger derivative book. So, obviously the German government will bail out DB; surely it won’t let one of the world’s largest banks trigger another Lehman-like disaster. But Europe does not have an all-powerful equivalent to the Fed. There are also very important political barriers to a bailout. If the German government breaks all its own rules against bailouts, how can it continue to say no to Italy, whose banking system is in far worse shape with NPLs estimated at 17%. And while you are at it, Spain and Portugal also have some very serious banking issues to confront.

If Germany steps into DB, all discipline within the EU is lost. The credibility of German Chancellor Angela Merkel, who has steadfastly opposed bank bailouts to great acclaim, would be destroyed. Therefore, expect Germany and the EU to require a bail-in more than a bailout, where large depositors and creditors share in the pain, not just taxpayers. The bail-in provisions are in place and they were test-driven in Cyprus in 2012–2013.

If you were a large depositor in a European bank, what would you do now? Would you wait for a bail-in? Could we see European bank runs in which depositors move their funds into U.S. banks and dollars?

Now, you may ask, is DB so important that it must be saved? Yes. Simply, it’s one of the world’s most systemically important banks and the proverbial “canary in the coalmine” for Europe. What happens to DB reflects the health of the entire system. DB is perched atop the largest derivatives book in Europe, a $61 trillion pile of who knows what, which is 20 times the size of the German economy. DB is a counter party to almost every major financial institution in the region.

Clients of Deutsche Bank are already taking steps to protect themselves by: 1) Reducing excess cash on deposit (last Thursday we learned that hedge funds were doing that); 2) Demanding tri-party arrangements (i.e. forcing DB to deal with them through a third party, which is also being reported); or 3) Hedging against potential loss via Credit Default Swaps, which have soared in price).

The fact that DB is indicating a systemic problem is supported by last week’s announcement from Commerzbank. Germany’s second largest bank plans a wide-ranging business restructuring that includes scrapping the bank’s dividend for the rest of the year and terminating nearly 10,000 jobs, roughly 20% of its workforce. Just last Friday, Dutch newspaper Het Financieele Dagblad reported that ING Groep NV, the largest Netherlands lender, will announce thousands of job cuts at its investor day tomorrow.

Other bank stocks are also telling us the problem is systemic. Credit Suisse is trading below its 2012 banking crisis lows. 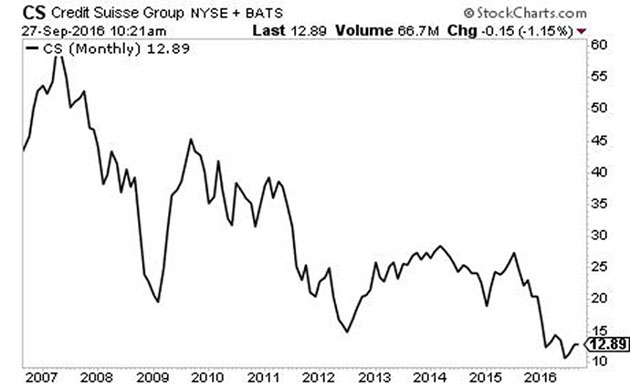 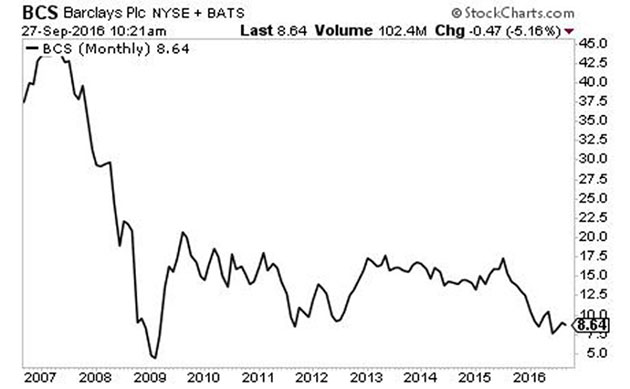 So, here is our worst case scenario.

Bank runs begin in one or more major EU banks such as DB as depositors, spooked by possible bail-ins, run to safety.

Germany is forced to bail out DB. This would involve key elements of a bail-in including haircuts for depositors and creditors as well as German/EU/ECB funding.

The EU would then have to co-ordinate combined bail-outs/bail-ins for much of the rest of the European banking system, shattering investor and consumer confidence.

Hopefully, this doesn’t happen. But remember, almost no one saw the 2008 banking crisis coming.

This article is the collaboration of Rudi Fronk and Jim Anthony, co-founders of Seabridge Gold, and reflects the thinking that has helped make them successful gold investors. Rudi is the current Chairman and CEO of Seabridge and Jim is one of its largest shareholders.

The authors are not registered or accredited as investment advisors. Information contained herein has been obtained from sources believed reliable but is not necessarily complete and accuracy is not guaranteed. Any securities mentioned on this site are not to be construed as investment or trading recommendations specifically for you. You must consult your own advisor for investment or trading advice. This article is for informational purposes only.

Want to read more Gold Report interviews like this? Sign up for our free e-newsletter, and you’ll learn when new articles have been published. To see a list of recent interviews with industry analysts and commentators, visit our Streetwise Interviews page.

Charts provided by the authors.