And now it is above $1,000 and on record volumes at bitcoin exchanges across the world.

Many, of course, are asking where it goes from here.

We just released the December issue of TDV (subscribe here) where I made my predictions on where I think it could go in 2017.

But bitcoin is just the leading prong in a decentralization revolution.

When the internet began its first function was email.  As we all know now, the internet has become much, much more than email.  It has become nearly a part of every facet of life and even includes infrastructure for bitcoin.

And, in much the same way, the first function of the blockchain was bitcoin. Now, there is an entire industry growing up around blockchain applications.  Groups like MaidSafe are even trying to create a completely decentralized internet that will exist solely on the blockchain.

And numerous other cryptocurrencies have blossomed.  The Top seven currencies, which can be seen at Coinmarketcap.com, all gained in 2016.

We featured it to TDV subscribers in the summer just prior to its massive price explosion.

And thousands of our subscribers have had a banner year because of it.  Here is just one from today. 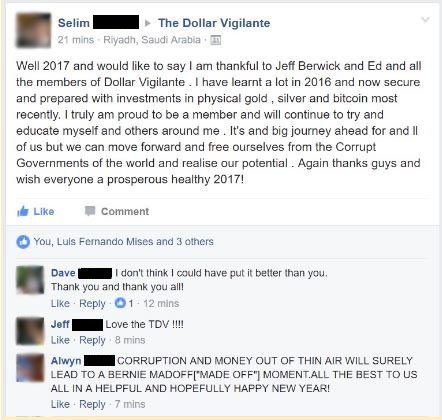 Do you wish that you had learned about the internet and invested in it in 1995?  You would have made a fortune.  And that is exactly where the cryptocurrency space is right now.

To find out more on bitcoin and cryptocurrencies and get access to our book, Bitcoin Basics, click here.

Many of the greatest minds in the cryptocurrency and blockchain space will be in Acapulco, Mexico in the last week of February.

Roger Ver, also known as the Bitcoin Jesus, and the first investor in the bitcoin space will be speaking at the TDV Internationalization & Investment Summit on February 24th along with myself and many others talking on every facet of investment to survive and prosper through the coming collapse.

That will be followed by the four day anarcho-capitalist conference, Anarchapulco, from February 25-28th.

The entire fourth day of the conference is devoted to blockchain and cryptocurrency technology, called Cryptopulco which will have all the biggest names in the blockchain space speaking including Roger Ver, Trace Mayer, Tone Vays, Dan Larimer of Steem, Jose Rodriguez of Mexico’s largest bitcoin exchange, Bitso… and many more.

If you want to learn about all the amazing investment opportunities in the cryptocurrency and blockchain space, the last week of February in Acapulco is the place to do it.

Given the rise in the price of bitcoin over the last few years it is bound to be quite the party!