Is the People’s Bank of China preparing to HALT GOLD IMPORTS into China?

Usually these cascades in the gold price go hand in hand with physical sell-offs in the West and strong demand Asia. It appears November has been no exception.

The volume of physical gold withdrawn from vaults of the Shanghai Gold Exchange (SGE) in November accounted for 215 tonnes, the highest amount in ten months. Year to date SGE withdrawals have reached 1,774 tonnes.

There have been rumours in the gold space about the People’s Bank Of China (the PBOC) curbing gold imports into the Chinese domestic market in response to capital flight.

Although my sources have confirmed these rumours, Chinese gold import in November was still very strong at an estimated 140 tonnes. I don’t expect the PBOC will halt gold imports all together.

The first mention of the rumour was by Reuters on November 25. By then the premium on physical gold trading at the SGE, which more or less reflects the strength of local demand versus international supply, had reached 2 % (from ~ 0.2 % on November 1). Reuters wrote:

“While we don’t have the exact numbers, we hear that they (Chinese government) have limited the number of importers,” said Dick Poon, general manager at Heraeus Precious Metals in Hong Kong.

In a previous blog post I stated the quote from Poon was not likely to be accurate, because there are 15 banks that have PBOC approval to import gold, but for every shipment a new License must be requested at the central bank. This protocol is referred to as “one batch one License”. Bullion cannot cross the Chinese border without a License. From the PBOC:

There shall be one Import … License of the People’s Bank of China for Gold … for each batch … and the License shall be used within 40 work days since the issuing date.

If the PBOC desires to curb gold import it can simply hand out less Licenses to approved banks, instead of deleting banks from the approved list. The former has happened as far as I can see. The next mention was by the Financial Times on November 30 [brackets added]:

Some banks with licences [approval] have recently had difficulty obtaining approval [Licenses] to import gold, they said — a move tied to China’s attempts to stop a weakening renminbi by tightening outflows of dollars, the banks added.

Although the Financial Times exchanged the terms “approval” and “License”, this is what I thought that was happening: banks are obtaining less import Licenses from the PBOC, which is obstructing supply, pushing up the SGE premium.

Either way the PBOC effort has not severely impacted the volume of Chinese gold demand as SGE withdrawals set a ten-month record at 215 tonnes in November, up 40 % from October. Premium or no premium the Chinese still ‘accumulate on the dips’. Additionally, mainlanders buy gold in Hong Kong where jewelry is cheaper as it doesn’t enjoy VAT. From Live Trading News we read:

“Gold sellers in Hong Kong, where mainland Chinese often buy gold, report an increase in purchases, …” according to published reports. “Some of the buying is also because of the Lunar New Year period next month, a time when buying normally picks up.”

How much of SGE withdrawals were supplied by import? Let’s make an educated guess. In the first nine months of 2016 SGE withdrawals accounted for 1,407 tonnes and China net imported 908 tonnes over this period, implying 65 % of SGE withdrawals was imported. If we use the past months as a reference China imported 140 tonnes of gold in November (=0.65*215). Year to date (-November) China has imported and estimated 1,147 tonnes.

An other possibility would be that elevated SGE withdrawals in November were supplied by scrap and disinvestment from within China (domestic mine output is fairly constant at 38 tonnes per month). Though this is not very plausible because the renminbi gold price went down in November (red line in exhibit 1). Normally scrap supply increases on a rising gold price. And hence, I assume the majority of SGE withdrawals in November were supplied by imports.

There have been concerns in the gold community with respect to a full stop on Chinese gold import. In my humble opinion the PBOC will not completely block imports for a number of reasons: 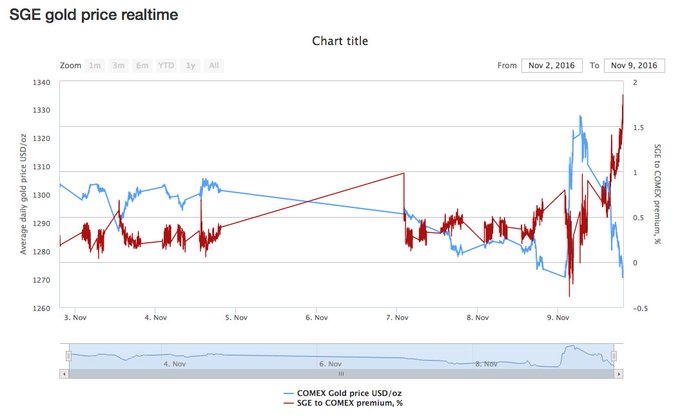 The PBOC has added zero ounces of gold to its monetary reserves in November. It’s total monetary gold reserves currently account for 1,843 tonnes.