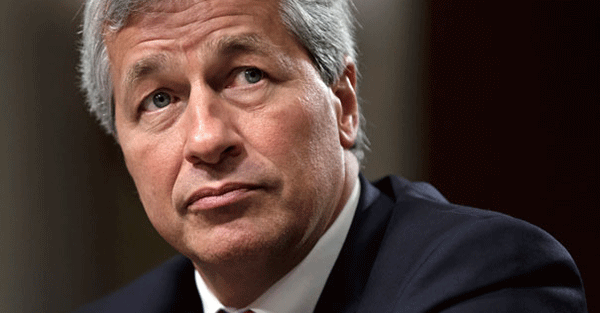 The only people who should be buying bonds today are altruistic billionaire lunatics with a financial death wish.
When The Morgue’s Jamie Dimon is becoming edgy on the risks associated with T-bonds…it’s time to get the heck out of Dodge…

In Lewis Carroll’s Through the Looking-Glass, the Queen would sometimes believe as many as six impossible things before breakfast.

She is probably working in the bond markets now.

The average yield on all German government debt is now less than zero, for example. This doesn’t really make any sense, but then not much does any more in the interest rate markets.

We saw last month that the Danish sex therapist (this detail being entirely gratuitous) Eva Christiansen had just been approved for a small business loan at a rate of minus 0.0172%. Ms. Christiansen is herself receiving interest on the loan she’s taken out.

At the same time Danish depositors are paying 0.5% for the ‘privilege’ of keeping their money in the bank.

Jamie Dimon, chairman and CEO of JP Morgan, points out that on October 15, 2014, the yield on US Treasury bonds moved, intra-day, by 40 basis points. How did he describe that move? “Unprecedented.”

But it matters, because Treasury bonds are meant to be the cornerstone of the capital market structure. If Treasury yields move up and down in a single day like a roller coaster, it does not suggest massive confidence in the rest of the financial system.

This pronounced volatility may be a precursor to larger shocks to come.

Even Mr. Dimon himself highlights this concern when he talks about much reduced liquidity in the bond market:

This is an incredible reduction in liquidity in what’s supposed to be one of the most liquid markets in the world.

But what does it mean?

For context, it was dodgy corporate credit and mortgage backed securities (bonds) that imploded back in 2008. Suddenly there was no liquidity.

We heard a great line at an investment conference during the dark days of 2008 that summed it up:

Given the liquidity dynamics highlighted by Jamie Dimon, all best are off in the bond market. Even the value of US Treasury securities can implode in an instant.

Long-term claims on paper money. In other words, all bonds.

Is it remotely possible that at some point, perhaps quite soon, the bond market could see yields spike higher, driven by…? As Paul Singer puts it,

“A surge of inflation which far exceeds the strength of the economies is not out of the question and could be catalyzed and accelerated by the oft-stated goal of central bankers to cause more of it.”

The bond market is acting schizophrenically. The cognitive dissonance is deafening.

It has pushed down the yields of bonds on the tacit understanding that central banks (most recently, the European Central Bank) will be buying them by the bucket-load.

But the expressed purpose of so-called Quantitative Easing is to ignite inflation. If you believe that central banks can succeed in creating inflation, then you should be selling bonds, not buying them, especially when they’re yielding less than zero.

We’re not convinced that central bank money creation can easily trigger inflation when the forces of deflation seem to be currently so powerful.

But it matters not. Anybody with half a brain cell will recognize the risk inherent in bond markets today. The relative and absolute attractiveness of undervalued equities, by comparison, is now astonishing.

The only people who should be buying bonds today are altruistic billionaire lunatics with a financial death wish.