The Nazi salute and the indoctrination of children?
Yep, that was the US’s idea first.

A man in a uniform dashes up to you with a badge pinned to his chest and says “that man over there is a thief! Quick, help me get him!” What do you do?

You would probably run and tackle the guy down, right?

To get to the rational part of your brain that tells you to hold on, since you don’t even know if the man in a uniform is actually a cop, or if the alleged thief actually did anything wrong, you have to first overcome a whole life of indoctrination telling you that when someone in a uniform tells you to do something, you do it.

Some are able to reach that rational part of their brains, but most are not.

Experiment after experiment has shown us the level of blind obedience that people have to anyone in a uniform—replacing any morality or common sense they might have had in order to comply.

Here in this video you can see some of the terrifying and silly things people do when instructed to do so by someone in a uniform. Mind you this isn’t even necessarily a person of authority, it’s merely someone dressed as one.

That’s what’s scary. Because people will willingly hurt other people for no other reason than the fact that someone appears to be an authority figure.

This kind of obedience is no accident. It starts off as an intentional process from childhood.

In school you were taught to sit down, shut up, and do whatever your teacher said.

The lesson from day number one was to take orders without thinking about them.

If you grew up in the United States, you likely started your day off with your hand over your heart proclaiming your fealty to your nation—whatever that was—and the piece of tri-colored cloth by which it was represented.

Before you could understand what any of the words in the Pledge of Allegiance meant, you knew them by heart.

That was exactly the point.

Which is why on October 12, 1892 the Pledge of Allegiance was made compulsory for all students in public schools.

Aiming to instill patriotism and obedience in children early on, Francis Bellamy, thesocialist minister who penned the Pledge, made sure to keep it brief and with good cadence so it would be easily memorized.

Children across the nation recite it every morning:

“I pledge allegiance to the Flag of the United States of America, and to the Republic for which it stands, one Nation under God, indivisible, with liberty and justice for all.”

Even into adulthood, once you could begin to understand the meaning of the words you were saying, there was to be no room for debate.

“Liberty and justice for all”? Who could possibly claim to object to that? Which is exactly what Bellamy wanted.

But in reality, how many people even as adults actually think about what those words mean.

The original Pledge was accompanied by ‘the Bellamy salute’, which was dropped during WWII because the Nazis started using it (they copied the United States’ tactics to instill national pride and obedience).

The Nazi salute and the indoctrination of children? Yep, that was the US’s idea first. 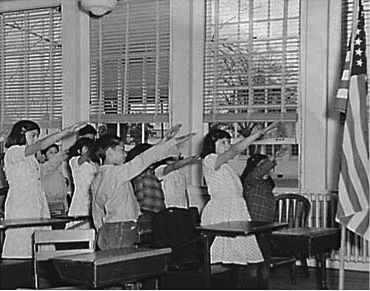 Thus, the same blind obedience given to those in uniforms is also given to actions commanded under the name of the American flag.

Just the same, this can lead some to forget all morality and common sense to willingly harm other human beings, whether they be across the planet or within the country itself.

With enough indoctrination, all it takes is a piece of cloth and a few words.

End of the Line
Secure the Final Release in the 4 Coin Banksters Series Now!