Our analysis is that the Ukrainian crisis was triggered by the U.S. deep state in preparation for the introduction of the next reorganization of the international monetary and financial system.  This is to retain the EU in the area of U.S. domination.
The only remaining choice for American decision-makers are the following, as they are standing with their back to the wall:

Submitted by Bruno Paul:
We first established in January 2013 the need to resolve the problem of the international monetary system, and its absolute priority.
We then proposed in May 2013 a strategy to effectively prepare the necessary resilience to support the change in the international monetary system. The various official announcements over the past months have largely confirmed that this anticipation was shared.
The synthesis of this strategy was again stressed by Laurence Brahm on 21/10/2013:

” It is not the complete removal of the old Bretton Woods financial architecture but rather the creation of a new parallel structure to the old. Eventually, countries will be able to choose which architecture is better suited to their own plans for reconstruction and renovation. ” [4]

This week of April 2014 where I release this article sees an important step in international relations. It is nothing less than discussing the 2015 framework and choosing between the repetition of the Vienna Conference in 1815 (the Concert of Nations) or Yalta Conference in 1945 (the Cold War) that will support the “new rules of the game in international politics“. [5]
In fact, this week in Europe a large number of high level bilateral meetings take place:
·                     President Xi with the Prime Minister of the Netherlands, François Hollande, Angela Merkel then with the European Commission president [6]
·                     President Obama with President Xi, and then he has extended his trip at the last minute to meet the Heads of State of the Netherlands, Italy, Belgium, UAE, South Korea, Japan, then a meeting with the Pope in Rome and a meeting with the King of Saudi Arabia. [7] Not to mention a planned meeting with Mr Barroso and Van Rompuy [8]
·                     The G7 meeting on the sidelines of the Nuclear Security Summit in 2014
·                     And other bilateral meetings, more or less official and prepared, among other heads of state following their presence at the Nuclear Security Summit 2014.
Officially the goal is mostly to talk about the crisis in Ukraine and Crimea, or to sign some contracts. The public communiques will mention them.
We believe that other issues, much more important but related, will be discussed : those around the current reorganization of the new international monetary and financial system. 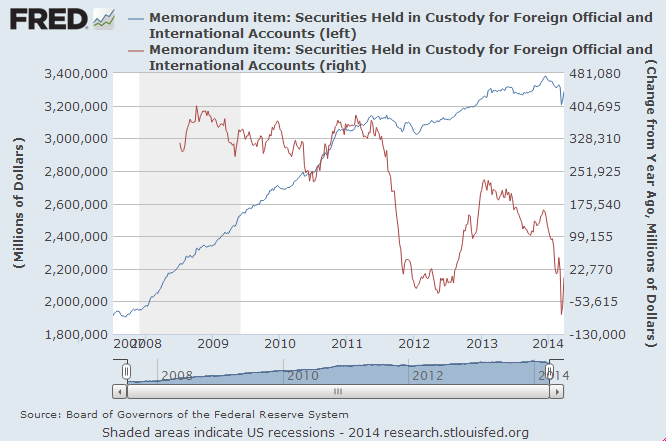 Marketable U.S. Treasuries held by the Fed in custody for Foreign Official and International Accounts; till 3/26/2014;
(Sources: St Louis Fed, Conscience-Sociale.org)
Our analysis is that the Ukrainian crisis was triggered by the U.S. deep state in preparation for the introduction of this next reorganization. [9] This is to retain the EU in the area of U.S. domination. [9.1]
The time has come to clarify what we mean by new international monetary and financial system.
We believe this is not only about launching what is already announced:
·                     A Development Bank for BRICS parallel to the World Bank
·                     A BRICS stabilization fund parallel to the IMF
·                     New bilateral trade agreements parallel to the WTO
but to go much further.
Firstly, BRICS Development Bank is becoming a “Bank initiated by BRICS for the development of all interested parties” and whose governance is open to any state wishing to join with the framework agreement. [9.2]
Secondly, and this is the most innovative part: it is to create another parallel institution to the Bank for International Settlements (BIS).
This is the oldest international financial institution fully governed by the West (6 permanent members and founders are the central banks of Belgium, France, Germany, Italy, UK and USA, which can have a double voting weight – analogy with Obama’s meetings this week is not a coincidence [10])
BIS is the central bank of central banks, that is to say, it organizes and manage trade between them … especially those concerning physical gold. Activities related to financial regulation (the famous Basel Committee rules) were added much later, after the existence of the bank became public when it was kept secret since its inception. [10.7]
The first problem to solve for the overhaul of the international monetary and financial system is not really the choice of a new currency. This is only a means. This is primarily to ensure price stability and the development of international trade. Otherwise, the only alternative is endless war for resources that are increasingly scarce. It is therefore necessary to separate the problem of a reference currency for international trade, from that of a reserve currency for central banks.
Global geopolitical dislocation following the 2008 crisis has cut the Gordian knot: there is no need any more to make a decision for all countries (which has blocked reform for many years [10.6]). Now BRICS countries have the initiative and willingness to move forward. This will is the key factor as we wrote: [10.9]

The global geopolitical context is characterized primarily by a tilt after reaching the tipping point: the decline of the American empire on the one hand and the rise of the multipolar initiative led by BRICS on the other. Because they are so desperately lacking in autonomy of decision and willingness, the EU and Japan find themselves buffeted by this tidal wave of history.

The choice is made for several years, international trade will be based on gold [10.3].

How will this happen in practice? Not with boats or trucks loaded with bullions, of course. As we said a “second BIS” was designed that can manage a clearing house for payments ( settlements ) in physical gold , especially to add to it a fundamental function to allow again international settlements for goods using “Real Bills” (a.k.a. Gold Bills ), as recommended by the New Austrian School of Economics. In his work Professor Fekete described these Gold Bills as being “destined to besettled in gold coins that are made available after the ultimate consumer surrenders them in exchange for finished consumer goods upon maturity”. [10.4] Their issue is strictly limited by the orders received to buy goods. They allow increasing the money velocity without systematically using coins and without any risk of inflation. [10.1]
This is far from a simple “100% gold” standard.
Gold is the only money (gold – silver ratio must float) as everyone knew for millennia. Today most people have more or less forgotten this unique role, but not Western central bankers who have tried for a century to put lipstick on a pig, so to speak. [10.8] By deceiving us, they deceived themselves and began to believe their own nonsense. A historical failure and on a global scale. Alas, alas, it is a failure of the European spirit. We need to recognize it in order to find the impetus beneath our feet allowing us to arise from the depth of this graveyard by the sea. [10.2]
BRICS countries do not necessarily need the West to initiate this new settlement system. [10.5] It must be noted in this respect what it can supersede. The dollar currency and U.S. Treasury at the foundation of famous “petrodollars” are replaced by the Gold Bills that will allow buying oil for example. [11] It is the function of reference currency for international trade.
But US Treasuries have a function of income related to their mid/long term interest rate too – it is also a fatal flaw in this system. This is the second problem: the choice of the reserve currency for central banks.
The new system offers very smartly to decouple these two functions. The income function can be brought (at appropriate time) by introducing gold bonds, that is to say bonds denominated in gold weight, with interests denominated in gold weight and whose principal is redeemable in gold weight (ie not merely an obligation backed by a collateral gold and denominated in fiat currency – a.k.a. gold backed bonds). Again, we must have an institution for the issuance of these bonds.

Note that to start, it is not necessary to replace any national currency by gold coins. The gold bills will circulate in parallel of currencies, and user confidence in these currencies will be reflected in real time in the local price of that currency measured in mg of gold (that is to say, the inverse of the ‘price of gold’ measured in the currency, which is the usual vision that we have – a totally wrong perception because you can not measure the length of a bar with a rubber-band: you must take the opposite approach). Hence the fundamental importance of not having rigged gold markets as currently in New York and London. [12]