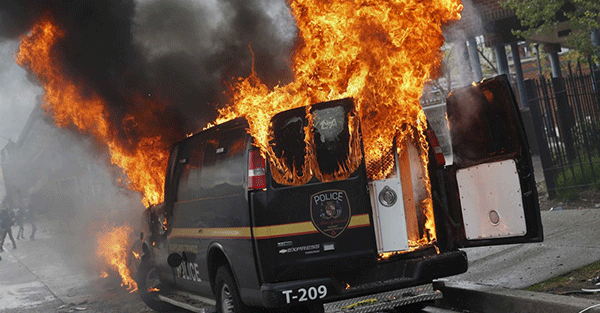 There are people out there on one side in Baltimore, and they’re angry. They’re looting, they’re rioting.
On the other side you have the state trying to stop them. Police and national guard units with their urban tactics and weapon systems.
They are the ultimate expression of men managing men managing things.
But is the men who manage money, who are managing all.

One of my favorite historians is a guy named Will Durant.

Durant is unfortunately no longer with us, but he and his wife Ariel made history more interesting than all the soap operas my mother used to watch when I was a kid.

I thought about something he wrote this morning when I glanced at the paper and saw a headline about the riots in Baltimore.

Now if the quote is confusing, just focus on the last eight words.

And Durant was right. There are people out there on one side, and they’re angry. They’re looting, they’re rioting.

On the other side you have the state trying to stop them. Police and national guard units with their urban tactics and weapon systems.

But is the men who manage money, who are managing all.

In our system, we have an unelected central banking elite managing the money.

Their policies have enriched a tiny percentage of wealthy individuals while utterly vanquishing untold millions.

Those in the middle class find that they’re not able to keep up with the rising cost of living.

Those little emergencies in life that we never plan on now completely wipe people out.

And the dream of retirement has now become almost an immature fantasy rather than a realistic and achievable goal.

People that are even lower on the socio-economic totem pole have it even worse.

There’s a great social despair that falls when people feel resigned to their economic station with no hope of advancement.

Hope is the most powerful of human emotions. More than fear.

It’s the reason why many politicians get elected.

When hope becomes crushed by the system, all you’re left with is fear and anger. That’s what we’re seeing in Baltimore.

Everybody has a breaking point. And more and more people are starting to reach theirs.

This isn’t just about racism.

We’ve been force-fed a toxic monetary system that has destroyed any hope of upward mobility and long-term security.

And it’s as if the collective immune system of the middle-class is simultaneously having a violent reaction to this financial poison.

The objective data out there shows us that wealth inequality and income inequality are the highest they’ve been in modern times. And that’s really saying something.

Now, inequality is entirely natural. There will always be those that are stronger and swifter, whether among humans or in the wild.

Engineering economic despair as a matter of policy, however, is entirely unnatural. It’s immoral. Destructive. And as history shows, it’s dangerous.

Plutarch tells us of Ancient Greece being on a knife’s edge in the 6th century B.C. until Solon came to power.

Durant himself tells us that anger and inequality become so great that nature has a way of correcting itself, either “by legislation redistributing wealth or by revolution distributing poverty”.

This is happening all across the West, whether the anger in Baltimore or the neo-Nazi politicians being elected in Europe.

The world’s not coming to an end, it’s changing. And sometimes that change can bring some difficult transition.

We can’t stop it from happening. But we can take every sensible step to ensure that we are watching it from the sidelines.

Our goal is simple: To help you achieve personal liberty and financial prosperity no matter what happens.

If you liked this post, please click the box below. You can watch a compelling video you’ll find very interesting.

Will you be prepared when everything we take for granted changes overnight?

Just think about this for a couple of minutes. What if the U.S. Dollar wasn’t the world’s reserve currency? Ponder that… what if…

Empires Rise, they peak, they decline, they collapse, this is the cycle of history.

This historical pattern has formed and is already underway in many parts of the world, including the United States.

Don’t be one of the millions of people who gets their savings, retirement, and investments wiped out.