Greece leaving the eurozone, dubbed the ‘Grexit’, would be a major blow for the European Union, as it would trigger a domino effect and eat deeply into taxpayers’ pockets, said the Greek Prime Minister Alexis Tsipras
“I think it’s obvious.   It would be the beginning of the end of the eurozone…

If the European political leadership cannot handle a problem like that of Greece, which accounts for 2 percent of its economy, what would the reaction of the markets be to countries facing much larger problems, such as Spain or Italy which has two trillion of public debt?,” Greek Prime Minister Alexis Tsipras told Corriere Della Sera Tuesday.

A ‘Grexit’ would be disastrous for the eurozone, as it would lay a heavy burden on European taxpayers, Tsipras added. 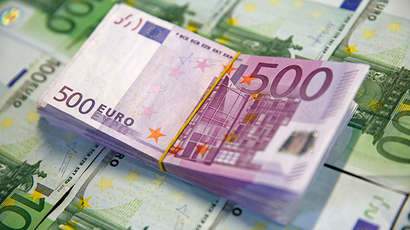 Grexit: Win for both EU and Greece?

He stressed that Greece is not using the possibility of leaving the eurozone as pressure or blackmail.

“We want to put an end to this nightmare debates on Greece’s leaving the eurozone; it is an obstacle to economic stability in Europe,”said Tsipras.

Greece and its troika of creditors – the IMF, the ECB and the European Commission – have so far failed to agree on Athens’ reform plan that will pave the way for a new €7.2 billion tranche for the country.

Tsipras, whose government came to power on promises to end austerity, said he could not accept the creditors’ terms that require reducing pensions and increasing utility bills. As a result of austerity measures, unemployment rose from 12 to 27 percent in three years, GDP fell by 25 percent, citizens are under a huge tax burden, and the number of people living below the poverty line is increasing every day, said Tsipras.

Greece will not accept ‘absurd’ proposal from Troika

“They [lenders – Ed.] are asking to increase by 10 percent the cost of electricity for households, in a country where thousands of people have no access to electricity. To abolish the subsidy for heating while you die from the cold,” he added.

In five years Greece has reduced pensions by up to 44 percent, cut salaries in the private sector by up to 32 percent, and had its labor market destroyed, said Tsipras.

The negotiations are escalated by the fact that Greece has skipped a €300 million IMF payment that was due on June 5. Originally, Athens was supposed to pay four installments totaling €1.6 billion in June, but has put the payments off till the end of the month and will pay all of them at once.

Tsipras has repeatedly said his country’s goal is to stay within the euro and the Greek government has had several reform plans rejected by the Troika.