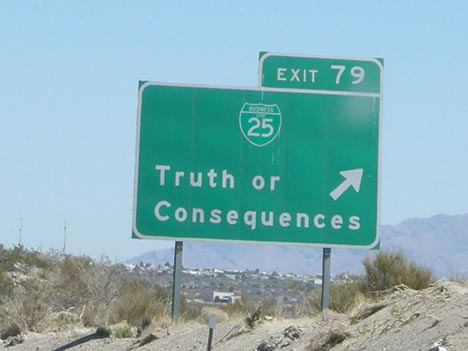 Truth or Consequences. If you take the time to learn and understand the reality of the situation around you – the truth – you can act to avoid unpleasant consequences. Remain ignorant of the truth or ignore it, and the odds are good that something rather unpleasant awaits, as reality is certain to deliver its consequences.
The trend is your friend. As long as the fiscal floodgates are open, as long as currency devaluation and untrammeled spending are the norm, it would be wise to face that truth head-on… and to prepare for the consequences accordingly.

End of Year Blowout! 2013 Silver Eagles Only
$3.49 Over Spot ANY QTY at SDBullion!
*While Supplies Last!

By Pining 4 the Fjords, TFMetals Report:

One of the only game shows in American history to air during five different decades was Truth Or Consequences, which began on radio in 1940 and continued, off and on, for almost fifty years. It survived the switch to television in 1950 and the replacement of four different hosts along the way, airing its last episode in 1988. I have vague memories of being home sick from school and watching this show, unaware at the time that it had been airing since before my father was born.

The premise of the show was quite simple: the host would ask you a question and if you didn’t know the “truth” (provide the correct answer) then you would face the “consequences” (usually a silly and somewhat humiliating stunt). Of course, the draw of the thing was to see people have to do something stupid and mildly embarrassing, coupled with the apparently universal attraction of watching other people Win Valuable Cash Prizes!!!  But if you look past the vapid, mindless entertainment aspect, I think the premise of the title was actually quite profound.

Truth or Consequences. If you take the time to learn and understand the reality of the situation around you – the truth – you can act to avoid unpleasant consequences. Remain ignorant of the truth or ignore it, and the odds are good that something rather unpleasant awaits, as reality is certain to deliver its consequences.

Human beings have the extraordinary capability to 1. Mentally build models of the vastly complex world around us, (what I will call “reality”) and 2. Conduct ourselves and plan our activities with these models in mind (to act based on our understanding of reality). We do not have to have actually been personally mauled by a Tiger to realize, based on our mental models of the world around us, that it might not be a good idea to stick our hand through the bars of its cage and try to feed it Cheetos. We can plan, strategize, and anticipate situations that haven’t even happened yet and adapt our behavior accordingly to lessen or avoid altogether the negative consequences that we know reality can deliver.

Given that we have these capabilities, and given the fact that reality is all around us all the time, one would think that people would be fairly good at dealing with it. Alas, one would be quite wrong, because human being also have another fairly amazing capability; many of us have the ability to ignore or deny reality when those facts are uncomfortable or inconvenient to us.

According to laws already passed in our country, there are at a minimum an additional 86 trillion in unfunded liabilities which must be paid in the coming years on top of the current debt. This figure (some estimates are far higher) comes from Chris Cox and Bill Archer, one a Democrat and one a Republican, both of whom served President Bill Clinton (Democrat) on his Commission on Entitlement and Tax Reform as chief advisors (link). According to their calculations, it would take more than 8 trillion per year in tax revenue, year after year, to meet these unfunded obligations and balance this budget. You could confiscate the entire salary of every taxpayer in the US earning more than 60k per year, and would only net 5 trillion per year… so current spending levels are massively unsustainable.

This is basic math, and it is reality. In light of this, it is interesting that the two major US political parties, the Republicans (fiscal conservatives) and the Democrats (fiscal liberals), have just reached a budget “compromise” that will supposedly set the course for our nation’s spending for the next decade or so. The fiscal liberals (Democrats who control the Senate under Majority leader Harry Reid) wanted spending to continue at current levels, and higher if possible. The opposition, however, controls the House of Representatives and according to our Constitution, this is the legislative body that has primacy in setting taxes and spending.

The fiscal conservatives, led by former vice presidential candidate and budget “hawk” Paul Ryan, just resoundingly passed a budget deal which cut spending over the next ten years. By 0.0005%. That’s five ten-thousandths of one percent. If they would have agreed to cuts 100 times greater than those in this bill, it would effectively balance the budget… in 200,000 years.

I lived in Nevada years ago, and at that time current Senate majority leader Harry Reid was a newly-elected senator from that state, so I have paid some attention to his career. He is without question one of the worst demagogues on the national scene, having no hesitancy to slander and defame his opponents in the rudest, most outrageous terms possible. He is an expert at passing legislation through chicanery, often employing outright bribes to fence-sitting senators (the ‘Cornhusker kickback’ to pass Obamacare being just one of many instances). His use of procedural trickery is legendary, “deeming” a bill already passed to avoid needing 60 votes to avoid a filibuster, for example. Along the way, he has used his position to enrich himself and his children to an almost unbelievable degree. Despite growing up poor and earning nothing but his “public servant” salary (less than 200k per year even at its peak) for all but 2 years of his adult life, he has nonetheless attained a net worth in the many millions (and so, revealingly, have his otherwise sparsely gifted children) by using his power to carve out bribes, facilitate shady deals, and enrich certain campaign donors who, in turn, enrich Harry (link).

But Harry Reid, as slimy and conniving as he is, serves his constituents far more honorably than his supposedly conservative counterpart Paul Ryan. Reid is at least honest about his goals, as the people who vote for him know exactly what they are getting: a promise to hollow out the middle class and pay off his big money donors at the top and his union supporters and the citizen clients of the state at the bottom. In short, he is terribly destructive but he must be credited for being completely honest to his constituents about seeking that destruction.

The Republican Paul Ryan, on the other hand, is far less honorable than the lying, bribing, grifting and cheating Democrat Reid. Ryan tells his constituents that he understands the fiscal dangers ahead, knows intimately the terrible consequences of not acting boldly to reign in unchecked government spending… then once elected and entrusted to carry the banner for fiscal prudence, is unwilling to fight for meaningful reforms of any kind to the present system. He proposes and trumpets “budget cuts” that are so laughably inconsequential that his opponents must surely, in private, wonder at his sanity or speculate that perhaps someone somewhere has a few incriminating photos of the man. If so, there must also be similar photos of John Boehner, Mitch McConnell, and every other Republican “leader” who seem to largely spend their time vying with each other to see who can be the first to neuter any genuine move towards fiscal sanity, each jostling to earn a few minutes of press time to trumpet their “bipartisanship” and “reasoned compromise”. These, apparently, are acceptable descriptors for referring to the callous betrayal of one’s constituents.

Reid, on the other hand, pursues his agenda with gusto. He is so unrepentantly committed to big spending that in 2009, when his party controlled both houses of Congress and the Presidency (and thus could pass literally any bill they wanted without a single opposition vote), he refused to even have a vote on a budget, so as to ensure that the spending could be carried out literally without limit and without having to defend it to constituents.

But Paul Ryan is even worse because he and his cowardly clutch guarantee there will be no opposition to such schemes, since they promise to play that role on the campaign trail then immediately recant upon assuming office. Ryan and company ensure that Reid and his merry part of drunken sailors get nearly everything they want. Ryan and his ilk deny the American public the mere chance of a genuine opposition.

I suspect that readers in virtually every western country will recognize a similar dynamic- the “let’s do more” spenders careening along and the token opposition, so cowardly and incompetent by turns, that the spenders are guaranteed victory at almost every turn.

But remember the title of this post: Truth or Consequences. Ryan and Reid, and their counterparts throughout the western world, ignore the larger mathematical reality. They deny the self-evident truth that something which is unsustainable cannot, in fact, be sustained. Through their irresponsible and self-serving actions, they deny reality itself. These men would do well to remember that reality doesn’t care that they find it unpleasant to contemplate. Reality doesn’t give a rip that it might inconvenience them, or that they may lose reelection. It doesn’t care what their opinion is. Reality is reality.

What does all of this have to do with precious metals investing? Simple: The trend is your friend. As long as the fiscal floodgates are open, as long as currency devaluation and untrammeled spending are the norm, it would be wise to face that truth head-on… and to prepare for the consequences accordingly.