It’s a war on cash.
And it’s coming soon to your doorstep…

Imagine you roll out of bed tomorrow to find out that US $100 and $50 bills were outlawed and deemed worthless?  Hard as it is to believe, this is now taking place in both Venezuela and India.

It’s a war on cash. And it’s coming soon to your doorstep.

This past Sunday, President Maduro, the tyrannical leader of the socialist paradise of Venezuela gave a three day warning that he was eliminating his country’s 100 bolivar bank note.

The official reasoning for the removal of these bills according to President Maduro’s statement on Venezuelan state-run TV:

“There has been a scam and smuggling of the one hundred bills on the border with Colombia, we have tried the diplomatic way to deal with this problem with Colombia’s government; there are huge mafias.”

The 100 bolivar note was the country’s largest currency denomination left in circulation and was equivalent in value to $0.02 USD.

That’s down dramatically from $0.10 when I visited Venezuela in March and needed a backpack of money to buy dinner. 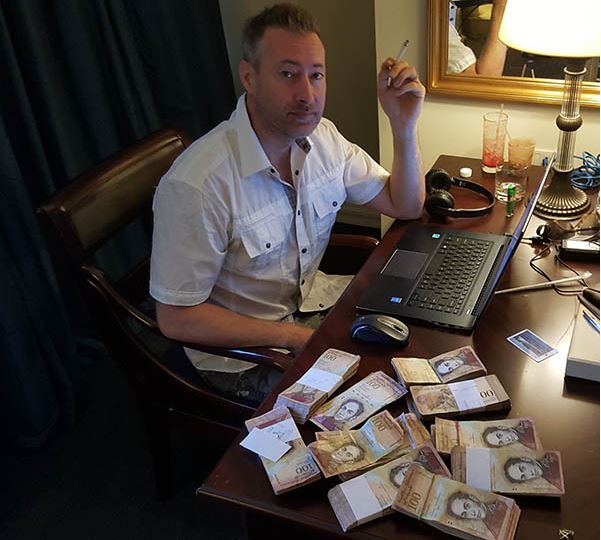 It’s hard to imagine that things can get much worse for the poor people of dystopian Venezuela who in many cases have had to resort to killing feral street animals in order to survive. Yes you read that correctly: Some have had to kill and cook dogs, cats and pigeons because of the limited food supply.

What is going on in Caracas, Venezuela is a modern example of the horrors of hyperinflation and the toll it can take on an unsuspecting population.

According to the IMF’s most recent estimation of the country’s inflation, the rate currently sits around 2000% and continues to grow daily – so fast in fact that restaurant owners have to update the prices on their menus almost daily.

Because of the sheer volume of banknotes which are required for daily purchases, many business owners and shopkeepers no longer determine prices based on the numerical value of the currency they receive. Instead they’ve started using scales to weigh the paper money which people carry around in backpacks instead of wallets.

Meanwhile, the currency situation in India is verging on the hardship in Venezuela.  India has now banned 500 and 1000 rupee notes, though the government has also assured the public it would print a 2000 rupee note to replace the smaller denominations. Unfortunately, that has yet to happen and – given India’s track-record – may not happen. Meanwhile, as a result of the currency chaos, poorer people are literally starving.

When it comes to currency, Venezuela is copying India by announcing that it too will issue six higher denomination notes. Thus, both of these countries have eliminated high denomination currency notes under the guise of “fighting crime” and both have promised higher valued notes in the future to fix the problems caused by the elimination of their current high valued bills.

The trouble here is that removing bills doesn’t fight crime. At least one recent study shows countries with the largest currency denominations actually have the lowest crime rates. Take for instance a country like Japan which is praised for its low crime rates and has a 10,000 yen note worth around $85 as of today.

Switzerland is a prime example of the opposite end of the spectrum because not only does it have a 1,000 Swiss franc note worth roughly $1,000 USD and one of the lowest crime rates in the world, but unlike Venezuela where guns are outlawed and violence is rampant, 1 in 2 Swiss people are gun owners.

It’s not difficult to see the correlation when you look closely at the situations in Venezuela and India – and it’s no coincidence that India also happens to have some of the strictest gun laws in the world.

Unfortunately, the reality is that we are living in an increasingly Orwellian world where nearly everything your average person thinks and believes is false.

Exactly how the financial elites want to keep it – so they can can keep plundering the masses. Don’t let them ransack your savings. Learn how to keep your money outside their game which is the monetary system and fiat paper.

Two of the best ways to protect yourself and profit are by owning gold and bitcoin.

For that reason we are offering our book, Getting Your Gold Out Of Dodge, for free, by clicking here.  It is a compendium of ways to buy, store and internationalize your precious metals to diversify political risk.

And you can find out much more about bitcoin and receive a special discount to access our book, Bitcoin Basics, as well as all our reports and research by clicking here.

It’s my opinion that what is happening in Venezuela and India are being used as test cases before rolling out fiat currency cancellations throughout the Western world.

Don’t be like most of the folks in India and Venezuela who waited until the ATMs were shut down and their cash declared worthless before taking action.