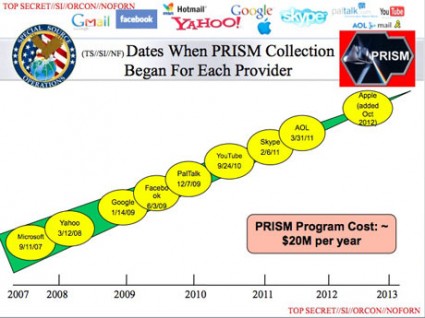 The U.S. government has been hacking in to the servers of Microsoft, Yahoo, Google, Facebook, PalTalk, AOL, Skype, YouTube and Apple and has been taking their user data without their knowledge or consent.  According to the Washington Post, the information being stolen includes “audio and video chats, photographs, e-mails, documents, and connection logs”.  This program is known as PRISM, and it was first revealed by the Washington Post on Thursday.  Since the story broke, Director of National Intelligence James Clapper has admitted that PRISM exists and so has Barack Obama.  The Washington Post initially claimed that all of the Internet companies were willingly handing over their user data to the government.  Now we are learning that is NOT true.  In fact, all of the Internet companies named in the Washington Post story have denied knowing about PRISM or ever giving the federal government permission to directly access their servers.  So this means that the U.S. government has been stealing massive amounts of user data from the largest Internet companies in the world without their permission.
Of course this is highly illegal and it directly violates the Fourth Amendment to the U.S. Constitution, but you can bet that the Obama administration is going to do everything that it can to get the courts to “make it legal”.  Hopefully the revelation of this program will be enough to get the American people to realize that we are rapidly being transformed into a Big Brother police state that is descending into tyranny.

Silver Buffalo Rounds As Low As
$1.09 Over Spot At SDBullion!

Barack Obama has described the systematic gathering of cell phone records and the Internet spying that the federal government has been doing as “modest encroachments” that we should all just accept as part of the price of living in a modern world, but if we allow the government to get away with this, where will it end?

Even if we had a total “Big Brother” society where the government watched everything that we did 24 hours a day, bad people would still do bad things.  There would still be terror attacks and great tragedies.  No matter how much the government intrudes into our lives, it can never guarantee us 100% safety.

Those that founded the United States understood this.  They did not want this country to be turned into a police state.  That is why they guaranteed us some very important protections in the Bill of Rights.  If the government wants to do a search, there are some very important procedures that must be followed first.

Unfortunately, the Obama administration appears to believe that the Constitution does not apply to user data on the Internet.  The NSA is apparently hacking into Microsoft, Yahoo, Google, Facebook, PalTalk, AOL, Skype, YouTube and Apple and taking whatever they want without ever getting permission from those companies.

You can bet that there are some very, very angry executives at those companies right now that are trying to figure out how to respond to these revelations.

All of these companies have vehemently denied that they were involved.  At this point, there is no reason to doubt their very strong denials.

For example, the following is what Larry Page, the CEO of Google and David Drummond, the Chief Legal Officer of Google wrote in a message to Google users on Friday…

You may be aware of press reports alleging that Internet companies have joined a secret U.S. government program called PRISM to give the National Security Agency direct access to our servers. As Google’s CEO and Chief Legal Officer, we wanted you to have the facts.

Second, we provide user data to governments only in accordance with the law. Our legal team reviews each and every request, and frequently pushes back when requests are overly broad or don’t follow the correct process. Press reports that suggest that Google is providing open-ended access to our users’ data are false, period. Until this week’s reports, we had never heard of the broad type of order that Verizon received—an order that appears to have required them to hand over millions of users’ call records. We were very surprised to learn that such broad orders exist. Any suggestion that Google is disclosing information about our users’ Internet activity on such a scale is completely false.

Finally, this episode confirms what we have long believed—there needs to be a more transparent approach. Google has worked hard, within the confines of the current laws, to be open about the data requests we receive. We post this information on our Transparency Report whenever possible. We were the first company to do this. And, of course, we understand that the U.S. and other governments need to take action to protect their citizens’ safety—including sometimes by using surveillance. But the level of secrecy around the current legal procedures undermines the freedoms we all cherish.

Facebook CEO Mark Zuckerberg has issued a similar denial.  He insists that Facebook never even heard of PRISM until Thursday…

I want to respond personally to the outrageous press reports about PRISM:

Facebook is not and has never been part of any program to give the US or any other government direct access to our servers. We have never received a blanket request or court order from any government agency asking for information or metadata in bulk, like the one Verizon reportedly received. And if we did, we would fight it aggressively. We hadn’t even heard of PRISM before yesterday.

When governments ask Facebook for data, we review each request carefully to make sure they always follow the correct processes and all applicable laws, and then only provide the information if is required by law. We will continue fighting aggressively to keep your information safe and secure.

We strongly encourage all governments to be much more transparent about all programs aimed at keeping the public safe. It’s the only way to protect everyone’s civil liberties and create the safe and free society we all want over the long term.

So how has the U.S. government been getting this user data if they do not have the cooperation of these large Internet companies?

They have been stealing it.

Is this the kind of society that we want to have?  Do we really want the government to be free to hack into the servers of Internet companies and take user data any time that it wants?

According to the Wall Street Journal, the NSA has also been gathering massive amounts of credit card data as well…

The National Security Agency’s monitoring of Americans includes customer records from the three major phone networks as well as emails and Web searches, and the agency also has cataloged credit-card transactions, said people familiar with the agency’s activities.

So if you ever bought something embarrassing with a credit card, there is a very good chance that the NSA knows about it.

If you don’t like where all of this is headed, then now is the time to stand up and say something about it.

Sadly, the truth is that most of our politicians see absolutely nothing wrong with our current system.  The following is what Barack Obama said in response to the recent revelations about the NSA…

“You can’t have 100 percent security and also then have 100 percent privacy and zero inconvenience. We’re going to have to make some choices as a society,” he said. “I think that on balance, we have established a policy and a procedure that the American people should feel comfortable with.”

Do you feel comfortable with the fact that the NSA is hacking into major Internet companies and stealing their user data?

I know that I definitely am not.

“There is a massive apparatus within the United States government that with complete secrecy has been building this enormous structure that has only one goal, and that is to destroy privacy and anonymity, not just in the United States but around the world,” charged Glenn Greenwald, a reporter for the British newspaper “The Guardian,” speaking on CNN. “That is not hyperbole. That is their objective.”

What do you think?