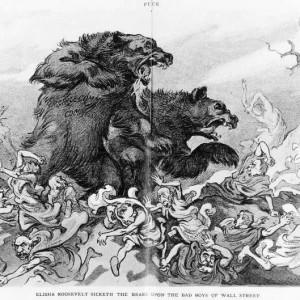 What does it look like when a 30 year bull market ends abruptly?  What happens when bond yields start doing things that they haven’t done in 50 years?
If your answer to those questions involves the word “slaughter”, you are probably on the right track.
Right now, bonds are being absolutely slaughtered, and this is only just the beginning.

Silver Buffalo Rounds As Low As
$.99 Over Spot At SDBullion!

Over the last several years, reckless bond buying by the Federal Reserve has forced yields down to absolutely ridiculous levels.  For example, it simply is not rational to lend the U.S. government money at less than 3 percent when the real rate of inflation is somewhere up around 8 to 10 percent.  But when he originally announced the quantitative easing program, Federal Reserve Chairman Ben Bernanke said that he intended to force interest rates to go down, and lots of bond investors made a lot of money riding the bubble that Bernanke created.  But now that Bernanke has indicated that the bond buying will be coming to an end, investors are going into panic mode and the bond bubble is starting to burst.  One hedge fund executive told CNBC that the “feeling you are getting out there is that people are selling first and asking questions later”.  And the yield on 10 year U.S. Treasuries just keeps going up.  Today it closed at 2.59 percent, and many believe that it is going to go much higher unless the Fed intervenes.  If the Fed does not intervene and allows the bubble that it has created to burst, we are going to see unprecedented carnage.

Markets tend to fall faster than they rise.  And now that Bernanke has triggered a sell-off in bonds, things are moving much faster than just about anyone anticipated…

Wall Street never thought it would be this bad.

Over the last two months, and particularly over the last two weeks, investors have been exiting their bond investments with unexpected ferocity, moves that continued through Monday.

A bond sell-off has been anticipated for years, given the long run of popularity that corporate and government bonds have enjoyed. But most strategists expected that investors would slowly transfer out of bonds, allowing interest rates to slowly drift up.

Instead, since the Federal Reserve chairman, Ben S. Bernanke, recently suggested that the strength of the economic recovery might allow the Fed to slow down its bond-buying program, waves of selling have convulsed the markets.

In particular, junk bonds are getting absolutely hammered.  Money is flowing out of high risk corporate debt at an astounding pace…

The SPDR Barclays High Yield Bond exchange-traded fund has declined 5 percent over the past month, though it rose in Tuesday trading. The fund has seen $2.7 billion in outflows year to date, according to IndexUniverse.

Another popular junk ETF, the iShares iBoxx $ High Yield Corporate Bond, has seen nearly $2 billion in outflows this year and is off 3.4 percent over the past five days alone.

While correlating to the general trend in fixed income, the slowdown in the junk bond business bodes especially troubling signs for investment banks, which have relied on the debt markets for fully one-third of their business this year, the highest percentage in 10 years.

The chart posted below comes from the Federal Reserve, and it “represents the effective yield of the BofA Merrill Lynch US High Yield Master II Index, which tracks the performance of US dollar denominated below investment grade rated corporate debt publically issued in the US domestic market.”  In other words, it is a measure of the yield on junk bonds.  As you can see, the yield on junk bonds sank to ridiculous lows in May, but since then it has been absolutely skyrocketing… 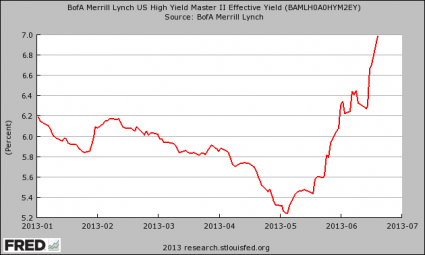 So why should the average American care about this?

Well, if the era of “cheap money” is over and businesses have to pay more to borrow, that is going to cause economic activity to slow down.

There won’t be as many jobs, part-time workers will get less hours, and raises will become more infrequent.

Those are just some of the reasons why you should care about this stuff.

Municipal bonds are being absolutely crushed right now too.  You see, when yields on U.S. government debt rise, they also rise on state and local government debt.

In fact, things have been so bad that hundreds of millions of dollars of municipal bond sales have been postponed in recent days…

With yields on the U.S. municipal bond market rising, local issuers on Monday postponed another six bond sales, totaling $331 million, that were originally scheduled to price later this week.

Since mid-June, on the prospect that the Federal Reserve could change course on its easy monetary policy as the economy improves, the municipal bond market has seen a total of $2.6 billion in sales either canceled or delayed.

And what we are witnessing right now is just the beginning.  Things are going to get MUCH worse.  The following is what Robert Wenzel recently had to say about the municipal bond market…

Thus, there is only one direction for rates: UP, with muni bonds leading the decline, given that the financial structures of many municipalities are teetering. There is absolutely no good reason to be in municipal bonds now. And muni ETFs will be a worse place to be, given this is relatively HOT money that will try to get out of the exit door all at once.

But, as I wrote about yesterday, the worst part of the slaughter is going to be when the 441 trillion dollar interest rate derivatives time bomb starts exploding.  If bond yields continue to soar, eventually it will take down some very large financial institutions.  The following is from a recent article by Bill Holter…

Please understand how many of these interest rate derivatives work.  When the rates go against you, “margin” must be posted.  By “margin” I mean collateral.  Collateral must be shifted from the losing institution to the one on the winning side.  When the loser “runs out” of collateral…that is when you get a situation similar to MF Global or Lehman Bros., they are forced to shut down and the vultures then come in and pick the bones clean…normally.  Now it is no longer “normal,” now a Lehman Bros will take the whole tent down.

Most people have no idea how vulnerable our financial system is.  It is a house of cards of risk, debt and leverage.  Wall Street has become the largest casino in the history of the planet, and the wheels could come off literally at any time.

And it certainly does not help that a whole host of cyclical trends appear to be working against us.  Posted below is an extended excerpt from a recent article by Taki Tsaklanos and GE Christenson…

He believes that the stock market has peaked and has entered a generational bear-market.  He anticipates a crash low in the market around 2016 – 2017.

His economic confidence model projects a peak in confidence in August 2013, a bottom in September 2014, and another peak in October 2015.  The decline into January 2020 should be severe.  He expects a world-wide crash and contraction in economies from 2015 – 2020.

Stock prices should drop, on average for the balance of this decade.  Demographic cycles in the United States (and elsewhere) indicate a contraction in real terms for most of this decade.

I was stunned when I originally read through that list.

Is it just a coincidence that so many researchers have come to such a similar conclusion?

The central banks of the world could attempt to “kick the can down the road” by buying up lots and lots of bonds, but it does not appear that is going to happen.

The Federal Reserve may not listen to the American people, but there is one institution that the Fed listens to very carefully – the Bank for International Settlements.  It is the central bank of central banks, and today 58 global central banks belong to the BIS.  Every two months, the central bankers of the world (including Bernanke) gather in Basel, Switzerland for a “Global Economy Meeting”.  At those meetings, decisions are made which affect every man, woman and child on the planet.

The Basel-based BIS – known as the central bank of central banks – said in its annual report that using current monetary policy employed in the euro zone, the U.K., Japan and the U.S. will not bring about much-needed labor and product market reforms and is a recipe for failure.

“Central banks cannot do more without compounding the risks they have already created,” it said in its latest annual report released on Sunday. “[They must] encourage needed adjustments rather than retard them with near-zero interest rates and purchases of ever-larger quantities of government securities.”

So expect central banks to start scaling back their intervention in the marketplace.

Yes, this is probably going to cause interest rates to rise dramatically and cause all sorts of chaos as the bubble that they created implodes.

It could even potentially cause a worse financial crisis than we saw back in 2008.

If that happens, the central banks of the world can swoop in and try to save us with their bond buying once again.