Anyone who denies that the Fed is engaging in unprecedented intervention in all of the markets – especially the gold and silver markets – is guilty of either ignorance or willfully intentional denial.
But the Chinese can play the intervention game as well.

We are seeing that giant footprint of intervention in the dollar/yuan relationship, as the Chinese yuan has just experienced it biggest weekly plunge ever: 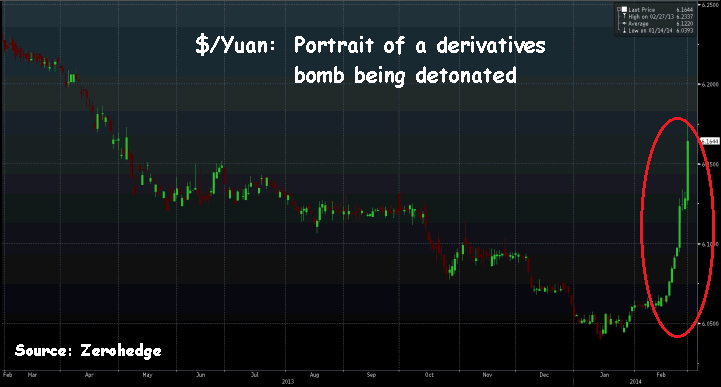 Briefly, this graph (edits in white/red are mine) shows the $/yuan relationship.  It plots the amount of Chinese yuan needed to buy one U.S. dollar. When the ratio declines, it means the yuan is increasing in value vs. the dollar.  As you can see, there has been a steady decline in the $/yuan ratio, which means that Chinese Government has been letting the yuan rise in value.  That is, until about a week ago.

What most market observers tend to overlook is that there are likely $10′s of billions worth of OTC derivatives that have been issued by the big Too Big To Fail banks tied to the trading relationship between the $/yuan. In fact, Morgan Stanley estimates the amount to be at least $150 billion:  $/yuan Derivatives Bomb Detonated?.  They also show a table in that link which estimates possible losses to the banks if this is the case to be well in excess of $1 billion.  Morgan Stanley should know, it was one of the biggest beneficiaries of the 2008-2009 Bush/Obama bailout of Wall Street.  MS also has one of the highest net exposures as a percent of bank capital to derivatives accidents.

In my view, that spike up in the $/yuan you see in the chart above has probably triggered a massive derivatives “explosion” because typically, in their keen foresight and wisdom, the bank rocket scientists never account for the risk of a big move like the one above in a such a short period of time.  If they were to price in this possibility, the derivatives contracts upon which they make $10′s of millions in selling profits would be too expensive and the banks would miss out on that easy income.   But hey, we haven’t seen a move like that in the history of the $/yuan contract so why should the banks ever expect it to happen?  And the Fed and Government has their back if they’re wrong.

Of course, this was same Nobel Prize winning wisdom that cause the Long Term Capital collapse and bailout (remember that one?) and that caused – more catastrophically – the 2008 collapse of the U.S. financial system (AIG/Goldman) and the subsequent joint Republican/Democrat 100% approved taxpayer bailout.

Many analysts are wondering why the Chinese Government, which has a tight control over the trading level of the $/yuan, has enabled the above spike up to occur.  If you think about the ramifications of what I just laid out above, it leads to one possibility (hint: think about the big blow that was just delivered to western bank balance sheets if I’m right about a behind the scenes derivatives accident having just occurred).

I see this as another big cruise missile just fired by China in the global currency war.  The first big missile being the massive accumulation of gold by the Chinese (as has been documented ad nauseum).  There’s also another benefit to the Chinese.  Think about the massive size of China’s dollar reserves.   The dollar has just become significantly more valuable vs. the yuan and so has the value of China’s dollar reserves.  This gives China more buying power to buy gold using dollars.

One other point, and this is tied to China’s ultimate goal:  to unload its massive hoard of dollar reserves while making as little noise about it as possible.  Last night, a few hours after the yuan dropped precipitously against the dollar, the US dollar index (the yuan is not part of the dollar index) plunged in cliff-dive fashion, losing 36 basis points in about 30 minutes.  While that may not sound significant, in currency trading terms that is considered to be a mini-crash.  Oh, it also dropped below key 80 line of support that has been drawn in the sand by the U.S Government, slicing through that level with ease.

I would suggest, and there’s no way of telling without having access to the inside books – the books which contain the numbers for which the banks spend millions to make sure Congress helps the banks keep them hidden – that the Chinese have unloaded another truckload of dollars behind the all the smoke emanating from the holes created by the Chinese Government motivated $/yuan crash and the related derivatives explosions: 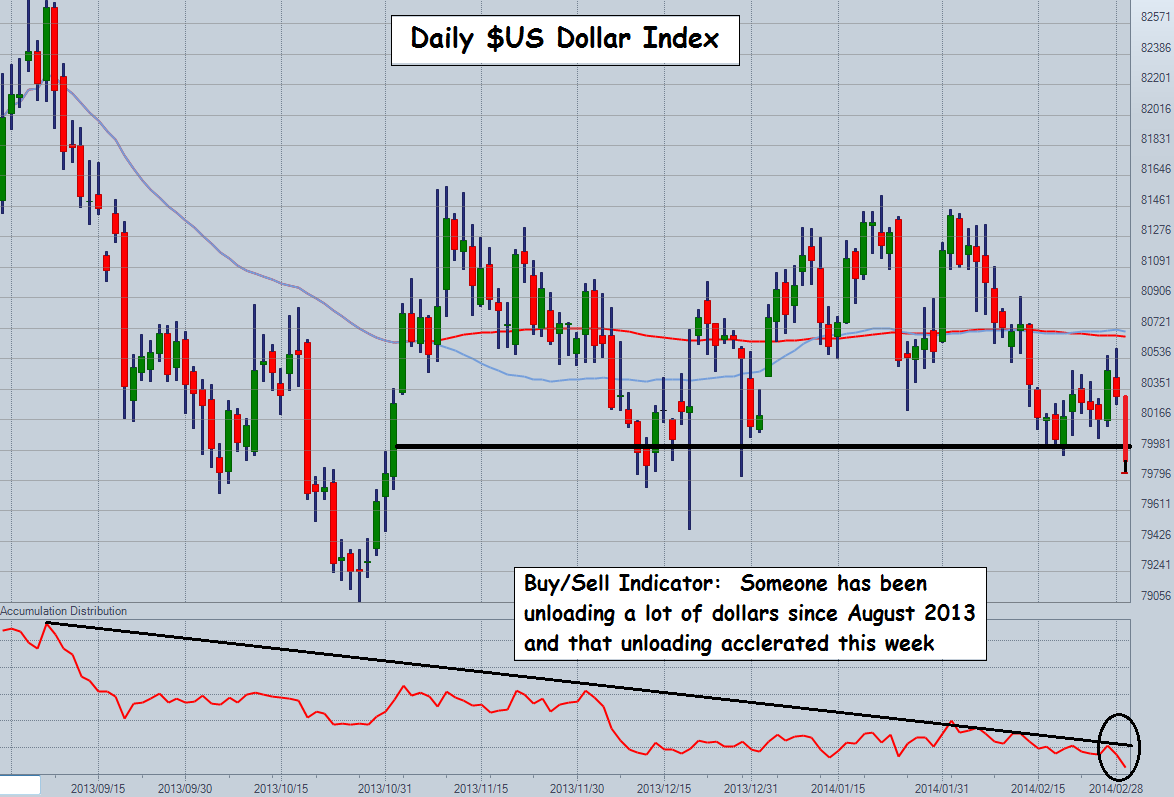 The greatest trick the devil ever pulled was convincing the world he didn’t exist.
The March Silver Shield Collection is Available Now at SDBullion!