As the price of meat continues to skyrocket, will meat soon be considered a “luxury item” for most American families?  This week we learned that the price of meat in the United States rose at the fastest pace in more than 10 years last month.  Leading the way is the price of shrimp.  According to the U.S. Bureau of Labor Statistics, the price of shrimp has jumped an astounding 61 percent compared to a year ago.  The price of pork is also moving upward aggressively thanks to a disease which has already killed about 10 percent of all of the pigs in the entire country.  And the endless drought in the western half of the country has caused the size of the U.S. cattle herd to shrink to a 63 year low and has pushed the price of beef to an all-time high.  This is really bad news if you like to eat meat.
The truth is that the coming “meat crisis” is already here, and it looks like it is going to get a lot worse in the months ahead.

A devastating bacterial disease called “early mortality syndrome” is crippling the shrimping industry all over Asia right now.  According toBloomberg, this has pushed the price of shrimp up 61 percent over the past 12 months…

In March, shrimp prices jumped 61 percent from a year earlier, according to the U.S. Bureau of Labor Statistics. The climb is mainly due to a bacterial disease known as early mortality syndrome. While the ailment has no effect on humans, it’s wreaking havoc on young shrimp farmed in Southeast Asia, shrinking supplies.

This disease has an extremely high mortality rate.  In fact, according to the article that I just quoted, it kills approximately nine out of every ten shrimp that it infects…

Cases of early mortality syndrome, which destroys the digestive systems of young shrimp, were first reported in China in 2009, said Donald Lightner, a professor of animal and comparative biomedical sciences at University of Arizona in Tucson.

The disease, which kills about 90 percent of the shrimp it infects, traveled from China to Vietnam to Malaysia and then to Thailand, he said. Cases also were reported in Mexico last year, Lightner said.

A different disease is driving up the price of pork in the United States.  It is known as the porcine epidemic diarrhea virus, and in less than a year it has spread to 30 states and has killed approximately 7 million pigs.

The price of bacon is already up 13.1 percent over the past year, but this is just the beginning.

It is being projected that U.S. pork production could be down by as much as 10 percent this year, and Americans could end up paying up to 20 percent more for pork by the end of 2014.

The price of beef has also moved to unprecedented heights.  Thanks to the crippling drought that never seems to end in the western half of the nation, the size of the U.S. cattle herd has been declining for seven years in a row, and it is now the smallest that is has been since 1951.

Over the past year, the price of ground chuck beef is up 5.9 percent.  It would have been worse, but ranchers have been slaughtering lots of cattle in order to thin their herds in a desperate attempt to get through this drought.  If this drought does not end soon, the price of beef is going to go much, much higher.

As prices for shrimp, pork and beef have risen, many consumers have been eating more chicken.  But the price of chicken is rising rapidly as well.

In fact, the price of chicken breast is up 12.4 percent over the past 12 months.

Unfortunately, this could just be the very beginning of this meat crisis.  As I wrote about recently, some scientists are warning that we could potentially be facing “a century-long megadrought“.

And right now, there are no signs that the drought out west is letting up.  Just check out the map posted below.  It comes from the U.S. Drought Monitor, and it shows how the drought in California has significantly intensified since the beginning of the year… 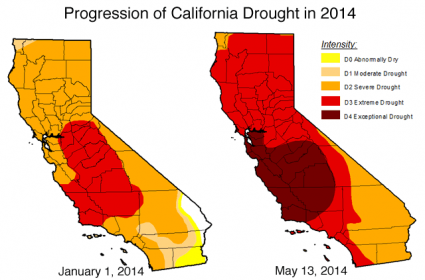 And considering how much the rest of the nation relies on the agricultural production coming out of California, it is very alarming to see that the drought is getting even worse.

Right now, things are so bone dry in most of the state that it is easy for wildfires to get out of control.  In fact, Governor Jerry Brown has just declared a state of emergency in San Diego County because of the vicious wildfires that are raging there…

Officials ordered another round of evacuations early Thursday north of San Diego as gusty winds and near 100-degree temperatures offer little relief from at least nine fires that have consumed a 14-square mile area of Southern California.

Gov. Jerry Brown declared a state of emergency for San Diego County, which frees up special resources and funding for the firefight.

The fires, coming earlier than normal in the wildfire season, are being fed by brush and trees left brittle by prolonged drought. They are also being whipped by a Santa Ana wind system that reverses the normal flow of wind from the Pacific Ocean and creates tinderbox fire conditions.

For the first time in its 14-year-history, the U.S. Drought Monitor, a federal website that tracks drought, designated the entire state of California as in a severe (or worse) drought.

If you do not live out west, you may have no idea how very serious this all really is.

For years, I have been warning about the potential for dust bowl conditions to return to the western half of the country.

Now it is actually starting to happen.

And we already have tens of millions of people in this country that are struggling to feed themselves.  If you doubt this, please see my previous article entitled “Epidemic Of Hunger: New Report Says 49 Million Americans Are Dealing With Food Insecurity“.

So what happens if drought, diseases and plagues continue to cause food production in this country to plummet?

Those that have studied these things tell us that there is a clear correlation between food prices and civil unrest.  For example, the following is a short excerpt from a recent Scientific American article…

Since the beginning of 2014, riots have occurred in countries including Thailand and Venezuela. Although they’re different cultures on different continents, these mass protests movements may all have one commonality; increasing food prices may have contributed to their occurrence. The cost of food has been steadily increasing in both Thailand and Venezuela; last month demonstrators in Caracas took to the streets marching with empty pots to protest food shortages. According to Dr. Yaneer Bar-Yam and fellow researchers at the New England Complex Systems Institute (NECSI), events such as these may be anticipated by a mathematical model that examines rising food costs.

The events of 2014 aren’t without precedent; the price of food has provoked (and placated) throughout history, beginning in Imperial Rome when Augustus introduced grain subsidies. In recent years, the Middle East has been particularly affected by the cost of grain. Centuries after Egypt developed bread as we recognize it, the nation experienced a bread intifada – the country rioted for two days in January 1977 following Anwar Sadat’s decision to drastically decrease food subsidies. More recently, under the rule of Hosni Mubarak, the price of grain rose 30 percent between 2010 and 2011. Then, on January 25, 2011 a new revolution began in Egypt.

Could rapidly rising food prices cause civil unrest in the United States eventually?

Meanwhile, you might want to start carving out a significantly larger portion of the family budget for food for the foreseeable future.