Gold has always been viewed as a safe haven for investors when world markets are in turmoil.
When the bear comes out of the cave, sell your stocks and buy gold, then sit tight until the bulls are back.
That cute little system has worked for people since our nation left the gold standard back in the sixties, but it has turned gold into the proverbial canary in the coal mine.  When the canary stops singing, due to unbreathable or flammable gasses building up, the miners better get out.   That little system worked pretty well also… that is until the canary died in 2008 and somebody nailed him to his post and set up a recording of a canary singing in the background, and told the miners to go back to work.

Currently precious metals prices are lower than the cost to mine them. Sure, miners can go to their hi-grade veins and keep running, but that is not a sustainable business model, only to be used for emergency situations. The central mass media companies, all owned by the same cabal of investors, are providing the canary songs. They have collectively acted to keep most gold stories out of the news. Several notable analysts have changed their songs, joining the dead canary, consistently insisting that gold is not manipulated, that it trades according to supply and demand rules. But these analysts are also resorting to the argument tactics of propagandists: making flat out denials of a problem with no credible evidence other than “the canary is still singing,”  outright ridicule of others who disagree instead of honest debate and dialog.

Are we in an emergency situation? 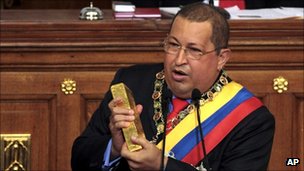 Apparently so! And apparently, the leaders of several nations are becoming aware of the fact. Several years ago, Hugo Chavez, leader of Venezuela asked the Bank of London to send over their gold that was stored there. As they sent it several weeks later, the price rose dramatically while Chavez paraded on national TV with bars of gold in hand. Many analysts said that the volume of the canary was turned up at that time. A couple of year later, in 2013, the price of gold was rising once again. Germany asked the US to send back its gold stored in US vaults. On a Wednesday of that week, the US president met with the heads of all the largest banks at the White House. After their chit-chat about the Super Bowl, craft beers and Kardashians, they probably had other important business. Two days later gold, as valued in dollars, began to fall radically, not stopping until it dipped below its mining costs. How coincidental. I wonder what Mulder and Scully would conclude? The Germans were denied their request, citing administrative and transportation problems, and told the gold would be sent over gradually over seven years. Wouldn’t you have loved to be a fly on the wall in those negotiations?

Over the past several years, we are discovering now, the Chinese government has imported massive quantities of gold—in fact, they have been purchasing more gold than the world’s gold mines combined produce each year. The rest is purchased from the recycled gold supply—you know, all those little shops that will buy your broken jewelry and any other gold items that you need to exchange for dollars. But while China has been importing over 2000 tons per year, the World Gold Council has been singing a Chinese song of 500 tons per year. China don’t care. They like buying undervalued gold. I wonder what they plan to do with it all as they implement their plan to become a world reserve currency?

Well, the canary has kept singing soothing songs, and the gold markets have been relatively calm, until recently. Some good folks in Switzerland managed to collect enough signatures to force a special election. The question on the ballot is whether or not to back the Swiss currency with gold again, like they used to. The vote is set for November 30, 2014. The leader of the gold initiative has been banned from Swiss media ahead of this vote. Hmmm… I wonder why.

GOFO rates, a key indicator of the availability of gold for sale, have dipped into the red zone on their dial.

So as we are awaiting the decision of the Swiss people, we hear that Russia has been purchasing large quantities of gold. Then we hear that the Dutch asked to have their national gold sent back home from the US just after the Germans asked in 2013. And the US returned it! Very quietly with no fanfare! Wouldn’t you have loved to be a fly on the wall in those negotiations?

My friends, the gasses are building up in the mine. While some regarded the late Hugo Chavez as a radical dictator with a hair brained idea of leaving the mine in 2011, now some very astute miners, Chinese, German, Swiss, Russian, and Dutch have picked up their lunch pails and headed for the exits as the dead canary sits there and its recorded song plays in the background.

Finally, with very little news coverage, the leaders of the G20 nations all agreed to some shifts in international banking rules that moved depositors from the number 1 spot on their priority list in case of a bank failure, down to about number 9 or 10. Now, if a bank fails where your money is stored, your money on deposit will be seized and used to keep the bank solvent. And as we learned in 2008, when the wrong bank fails, it takes everyone else down with them, each of them chained together in a circle of debt payments which their tenuous profit margins cannot absorb.

Mining disasters happen slowly … then all at once. A few pesky miners warn management about dangerous situations and management does nothing. The miners keep working because that is what they do for a living. They keep complaining. Some resign and go elsewhere, but most stay thinking they have no other choice. Then an incident happens in a deep corner of the mine. The management calms everyone down, gets a new canary, and sends them back to work after taking some minimal actions. Then the disaster comes.

Friends, recognize the high risks of staying in the mine? Let’s head for the exit. What do you have to lose by leaving? You have much to lose if you stay too long.

If you have a nest egg, why not protect it with gold? The cost is currently just above what the miners pay to get it out of the ground, artificially held low by those who nailed the canary on the post. Take a portion of that savings and buy some gold coins from teh local coin shop. Is this unreasonable? Do I sound like a charlatan trying to seal your money?

There is no risk in trading for gold at this price! Any further dips below mining cost will be brief.

Perhaps you are not quite convinced gold will be safe. Is your home paid for, or does a bank have a lein on it? You know, they can call your mortgage note due even if you have been making regular payments. Read that fine print. So why not pay off your home, freeing yourself of interest payments to these bankers who broke our money system and securing a place to live? There is now a great risk to keeping your dollars in the paper-money-based financial system, a world system that failed in 2008 and has never been repaired. We need to have a new financial system and they are working on it. The old one is being held together with the duct tape of central bank intervention (Bond purchases, QE, Twist, Direct monetization) until the world’s bankers negotiate the new one.  Many countries are shoring up their national finances with gold in advance of that reset, expecting that Gold will once again be the backing of the world economies, in some form, as it has been for most of human history.

Be sure you have some gold in your personal safe when that day comes.

The conversation has begun here.

Secure the Latest Silver Shield Releases Now at SDBullion:
Never Trust Government, Joy to the World & The 7 Sins of Obama