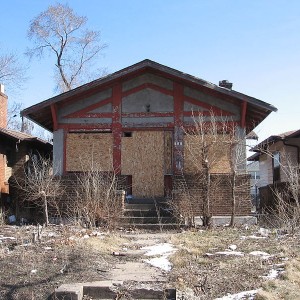 When you drive through many of these communities, you will notice that a lot of people have a really hollow look in their eyes.  Decades of slow, steady economic decline have really taken a toll, and even the architecture in these cities looks depressed.  But despite all of the decay, there is still evidence that there was once something truly great about these communities.  Will we be able to recapture that greatness before it is too late?

A lot of writers make economics really complicated, but the truth is that it does not have to be.  For example, if you want your country to have a great economy it has got to produce wealth.  And one of the primary ways to produce wealth is to make stuff.  Immediately after World War II, the United States had the greatest manufacturing base the world had ever seen and we outproduced the rest of the planet combined.  Great manufacturing cities sprouted up all over America and the middle class thrived.  It was truly a great time to be an American.

But then we decided to start shipping in cheaper products from overseas.  At first it didn’t create too much of a problem for our massive economy, but eventually the floodgates opened up and we lost tens of thousands of manufacturing facilities and millions upon millions of good paying jobs.  Our labor pool was merged with the labor pool of countries such as communist China where it is legal to pay slave labor wages to manufacturing workers.  Needless to say, our workers could not compete with that and our middle class started to shrink rapidly.

Today, there are many American cities that were once truly great that are now truly frightening to visit.  For example, a recent CNBC articledetailed the plight of Reading, Pennsylvania…

In August 2008, factory workers David and Barbara Ludwig treated themselves to new cars—David a Dodge pickup, Barbara a sporty Mazda 3. With David making $22 an hour and Barbara $19, they could easily afford the payments.

A month later, Baldwin Hardware, a unit of Stanley Black & Decker, announced layoffs at the Reading plant where they both worked. David was unemployed for 20 months before finding a janitor job that paid $10 an hour, less than half his previous wage. Barbara hung on, but she, too, lost her shipping-dock job of 26 years as Black & Decker shifted production to Mexico. Now she cleans houses for $10 an hour while looking for something permanent.

They still have the cars. The other trappings of their middle-class lifestyle? In the rear-view mirror.

I once had an aunt that lived in Reading.  She is dead now, and so is most of the city.  At this point, more than 40 percent of those living in Reading are impoverished and the city government is flat broke.

Perhaps no other region in the country has more eerie examples of urban decay than the once dominant industrial region known as the Rust Belt. Covering the Midwestern states of Illinois, Indiana, Michigan, Ohio and Pennsylvania, the region is plagued by a number of abandoned factories, houses and buildings that lay in crumbling ruins.

You can see some incredible photographs by Seph Lawless of the decay in the Rust Belt right here.  The pictures are incredibly depressing, but it doesn’t take too much imagination to see that these cities were once truly impressive.

Just take Gary, Indiana for instance.  It was once known as “the Magic City” because it was doing so well, but now it is a rotting, decaying hellhole.  The following is from an excerpt from a Daily Mail articleabout Gary…

Gary, a struggling city 30 miles south of Chicago along the shores of Lake Michigan, is a prime example of the trend.

Some one-third of its residents live in poverty and the home and business vacancy rate is about 35 percent. Gary recorded 43 murders in 2012 – three times as many per capita as nearby Chicago.

At one time, Gary was the envy of the rest of the globe.

But now very few people would ever want to willingly live there.

The following is how James Kunstler described what he saw when he traveled through Gary, Indiana…

Between the ghostly remnants of factories stood a score of small cities and neighborhoods where the immigrants settled five generations ago. A lot of it was foreclosed and shuttered. They were places of such stunning, relentless dreariness that you felt depressed just imagining how depressed the remaining denizens of these endless blocks of run-down shoebox houses must feel. Judging from the frequency of taquerias in the 1950s-vintage strip-malls, one inferred that the old Eastern European population had been lately supplanted by a new wave of Mexicans. They had inherited an infrastructure for daily life that was utterly devoid of conscious artistry when it was new, and now had the special patina of supernatural rot over it that only comes from materials not found in nature disintegrating in surprising and unexpected ways, sometimes even sublimely, like the sheen of an oil slick on water at a certain angle to the sun. There was a Chernobyl-like grandeur to it, as of the longed-for end of something enormous that hadn’t worked out well.

Sadly, what is happening to Reading and Gary is just a preview of what is slowly happening to the entire nation as a whole.

Since 2001, the United States has lost more than 56,000manufacturing facilities.

That is absolutely astounding.

Most of those jobs have gone overseas.  That is why it seems like most of our products say “Made in China” these days.  They are getting rich while our communities suffer, and then we have to beg the Chinese to lend our money back to us.

And an astounding number of our young men are just sitting at home instead of doing something productive.  As I wrote about the other day, one out of every six men in their prime working years (25 to 54) do not have a job at this point.

Also, the percentage of working age Americans not participating in the labor force is up to 37.2 percent – a 36 year high.

Not only that, but the quality of our jobs has also steadily declined as we have lost good paying manufacturing jobs to overseas workers.

No wonder the middle class is dying.

And of course there is so much more that could be said about this.  For even more numbers about our manufacturing decline, please see my previous article entitled “Shocking Facts About The Deindustrialization Of America That Everyone Should Know“.

These problems were not created overnight, and they are not going to be solved overnight either.

But as a nation, we have got to understand that we cannot consume our way to prosperity.  That is only going to result in even more debt.

Instead, we have got to make the decision to produce our way to prosperity.

In other words, we have got to start making stuff in this country again.

That may sounds “crazy” to a lot of people, but it is possible.  We have just got to have the willingness to do it.