What the hell happens when global investors try to invest 10% in gold or say just 1-2% in silver?

If investors decided to increase their gold and silver investments to equal the percentage in 1980, we would have the following:

Global Financial Assets are more inflated and propped up than ever.  According to the most recent figures published by The City UK Fund Report, total Global Conventional Assets under management topped $105 trillion in 2014.  That’s one hell of a lot of future PAPER CLAIMS.

Unfortunately for most investors, the majority of these supposed assets will evaporate into thin air from where-ith they came.  Bubbles were designed for children to make and play with… not meant for adults to use in the financial industry.

Regardless, the global financial system is now polluted with a massive amount of toxic bubbles covering all corners of the planet.  When the first large one finally pops… WATCH OUT.

I put together this chart from figures I found at Sharelynx.com.  According to the data, gold comprises 0.58 percentage of global financial assets, while silver comes in at a pathetic .013%: 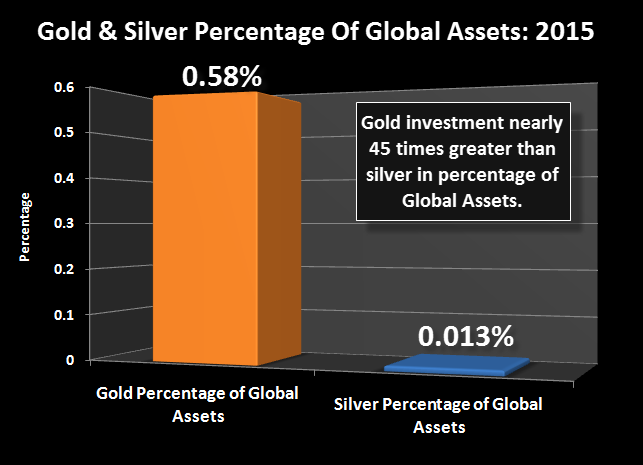 Even though gold is a little more than a half of a percent of total global financial assets, it’s at least 45 times greater than silver.  Which is why Central Banks hate silver much more than gold.  Why?  Because very few Central Banks own silver and the market is so tiny that if a significant amount of funds decided to flow into silver, it would cause its price to skyrocket higher.

These next two charts show how gold and silver as a percentage of global financial assets have declined since 1980: 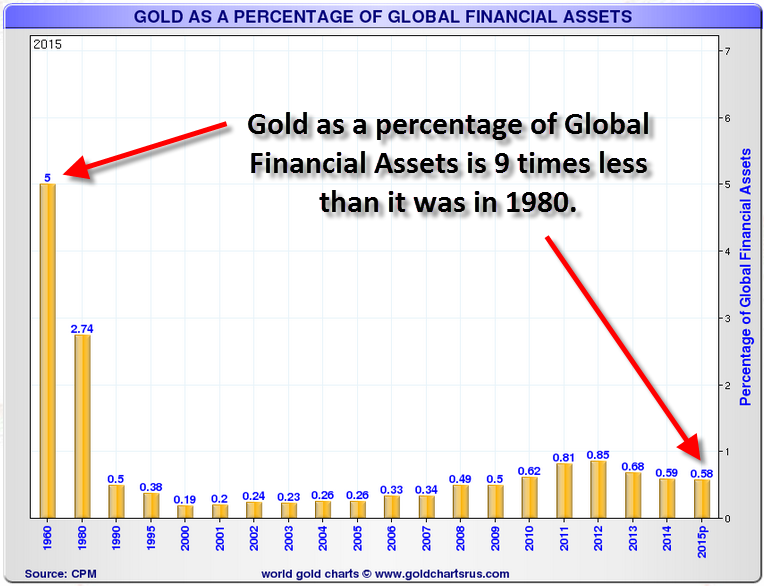 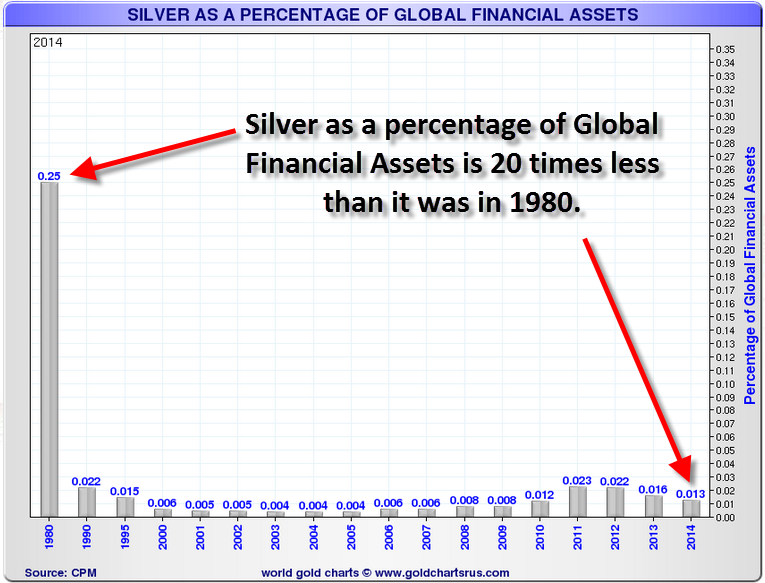 In 1980, gold represented a stunning 5% of the total global financial assets, while silver comprised of 0.25% (a quarter of a percent).  However, over the next three and a half decades, these percentages declined significantly.

Gold is now 9 times less of a percentage of global financial assets than it was in 1980, while silver is 20 times less.   The Fed, Central Banks and Wall Street did a wonderful job administering a FRONTAL LOBOTOMY on the public, which forced them out of real assets and into the largest financial ponzi scheme in history.

If investors decided to increase their gold and silver investments to equal the percentage in 1980, we would have the following:

Before some of the readers start rolling their eyes and BELLY-ACHING that this is just another attempt at precious metals hype, let me add a few logical points of view.

Many precious metals analysts including Jim Rickards and Jim Sinclair, believe we are going to see a gold price north of $10,000.  They base their forecast on backing all the outstanding U.S. Dollars by a certain percentage of gold.  The higher the percentage of gold backing, the higher the gold price.  However, $10,000 gold seems to be a base price when faith in the U.S. Dollar goes down the toilet.

That being said, I actually believe the future values of gold and silver could be even more silly and stupid than $12,00o or $360.  Why?  Because the popping of adult sized massive financial bubbles could actually push gold and silver investment percentages even higher than what they were in 1980.

What the hell happens when global investors try to invest 10% in gold or say just 1-2% in silver?  This may seem outlandish right now, but when financial institutions start going bankrupt and bankers start jumping off of roof tops, COMMON SENSE investing will likely return as proper investing logic like a 2 X4 across the head.

When the world finally experiences a global Lehman Brothers event that pushes us into massive depression, investors will seek safety in the precious metals.  Unfortunately, there will be very little supply… only a much higher prices.