For the crime of  an attempt to reduce the influence and circulation of fiat currency issued by the Federal Reserve Banks, John F Kennedy was sentenced (presumably by interests controlling the FedResSystem) to death by firing squad 50 years ago today.
That such a sentence was carried out on the (convenient for whomever) date of 11/22/63 is historical record.
But as for silver, it would appear that demonetization of silver was already a done deal.

This post was meant to be about Silver Certificates, and if indeed their alleged increased issuance as a result of Executive Order 11110 (or otherwise) could have raised the possibility of abandoning or at least reducing the issuance of FedResNotes in favor of debt-free, silver-backed currency. If so, how would the process have taken place, how exactly WOULD the country have functioned on any supposed pure silver standard? What, exactly, happened to the price of silver in the months preceding and following the order, through 1968 when redemption of the Certificates was finally halted?

Then I stumbled across this (forcefully written, but nevertheless compelling) ‘refutation’ of the EO_11110 ‘theory’ according to which for the crime of  ‘attempt to reduce the influence and circulation of fiat currency issued by the Federal Reserve Banks, John F Kennedy was sentenced (presumably by interests controlling the FedResSystem) to death by firing squad.

That such a sentence was carried out on the (convenient for whomever) date of 11/22/63 is historical record, the question is only the offense he may have perpetrated, and the composition of the jury and executioners. More on that later. But as for silver, it would appear that demonetization of silver was already a done deal – indeed, the EO in question was just a part of the mechanism for dismantling silver as a monetary metal. It was merely an add-on to Public Law 88-36,  which JohnF had  signed earlier. The EO is supposedly merel an ‘orderly retreat’,  by restoring (restoring, i.e. giving back previously existing) control over issuing silver certificates to the SecTreas that had been stripped due to the new law. The Act went into effect in June, 1963, and ordered the repeal of the Silver Purchase Act of 1934, among others. The law also authorized the (then-new) issuance of $1 and $2 FRNs.

TITLE II—REPEAL OF TAX ON TRANSFERS OF SILVER BULLION

Code of 1954 (relating to silver bullion) is hereby repealed.”

As the official story goes, it was industrial use of silver that drove the value of the silver in coinage higher than face value of the currency. (Of course, it’s difficult to explain to people nowadays that thus the ‘dollar value of silver’ in a dollar was denominated in an FRN unit, not the same ‘dollar’ stamped onto the coins.) Once the process was recognized by the ‘smart-money crowd’ quite possibly/likely market shenanigans also contributed, but the fact remains that the period saw silver’s purchasing power rise nearly threefold in the 18 years between 1950 and 1968.

The growth of the monetary base might have had something to do with this turn of events, too, though — especially after 1961… 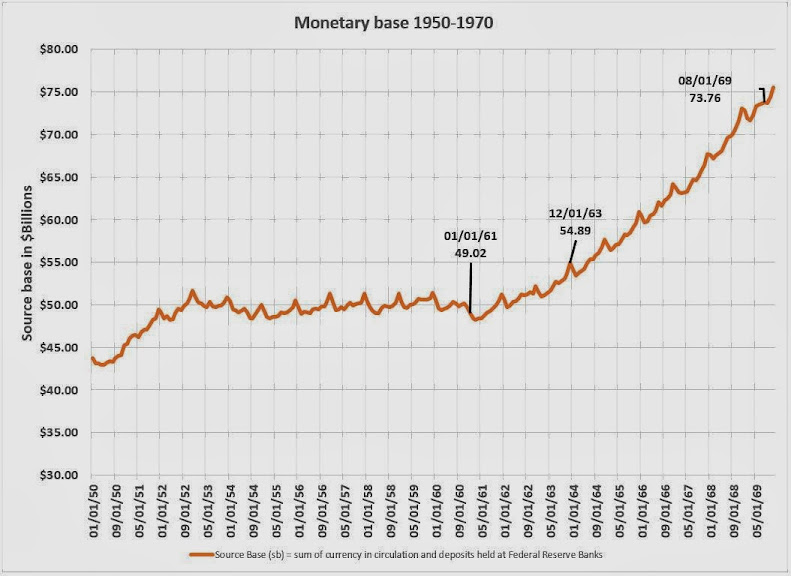 The other side of the tale is presented by the Silver Bear Café, among other places – arguing that the silver issuance authority granted was aimed at restoring silver-backed currency and doing away with Federal Reserve Notes.

All of these questions around the demonetization of silver in the 1960’s deserves further study and closer scrutiny — regardless of ties to JFK’s death. Though professional myth-busters appearing on the anniversary of an assassination are always suspicious to me, and somehow such ‘myth-busters’ often go out of their way to insist that there is NOTHING parasitic or crony-inducing in the mechanism of FRN issuance by the FedRes. But, I was thwarted in my though experiment of the ‘what-if’ that is so common in history. There does not seem to be a more detailed framework as to how such a currency change might have taken place, or who would have executed it to what parameters.

So instead, below is a speech from JohnF from 1961. There is plenty in it that is as timely now as it was then, if not more. It contains as many, if not far more, potential offenses against the then-PTB (who are very likely the same as or very similar to the current PTB). When thinking about men like JohnF, I am reminded of the need for inspiring, thoughtful and honest leadership. The increasingly declining quality of the ‘facsimilies’ thereof that are served up to us (as opposed to rising up from among the people), has gotten to be alarming as the decades rolled on.

I am not sure that a single, charismatic orator upon whom all the hopes and aspirations of a nation can be projected is necessarily the best idea – there are more than a handful of very negative examples of such personality cults. Yet examples of ethics, morals, convictions, humanity and courage are needed in every society, and we can no longer look to our ‘leaders’ to display such values.

Despite not REALLY having come into the job merely of his own talents and skill, to me JohnF would be among the examples of executives who truly held the office with an attempt to represent, empower and protect the populace. Enriching himself and circle seemed less a priority. That his family continued to have a higher-than-average incidents of deaths due to causes other than ‘natural’ seems to speak for itself. It’s reasonable (if perhaps sentimental) confirmation of the fact that their views and activities were ruffling the wrong sort of feathers. Lone (and lonely) deranged gunmen apparently are quite common in society, just waiting for the opportune moment to wake up one day to coincidentally change history…

While I remain hopeful that all of our societies are capable of generating such leadership – the timing of this gets more remote and less likely by the day. Societies are known for being able to sustain what ultimately prove to be unsustainable development models longer than individual humans can stay alive… Yet worthy leaders can only present themselves to a knowledgeable, active populace. Despite the (seemingly) glacial pace of this process, I would argue that he spread of knowledge in the populace is beginning to speed up. Let’s hope it happens fast enough.

JFK’S SPEECH AT THE UNIVERSITY OF WASHINGTON (NOVEMBER 16, 1961)

“We cannot, as a free nation, compete with our adversaries in tactics of terror, assassination, false promises, counterfeit mobs and crises.

We cannot, under the scrutiny of a free press and public, tell different stories to different audiences, foreign and domestic, friendly and hostile.

We cannot abandon the slow processes of consulting with our allies to match the swift expediencies of those who merely dictate to their satellites.

We can neither abandon nor control the international organization in which we now cast less than 1 percent of the vote in the General Assembly.

We possess weapons of tremendous power—but they are least effective in combating the weapons most often used by freedom’s foes: subversion, infiltration, guerrilla warfare, civil disorder.

We send arms to other peoples—just as we send them the ideals of democracy in which we believe—but we cannot send them the will to use those arms or to abide by those ideals.

In short, we must face problems which do not lend themselves to easy or quick or permanent solutions. And we must face the fact that the United States is neither omnipotent or omniscient—that we are only 6 percent of the world’s population—that we cannot impose our will upon the other 94 percent of mankind—that we cannot right every wrong or reverse each adversity—and that therefore there cannot be an American solution to every world problem.”