Is A REAL Breakout in Silver Prices FINALLY At Hand?

Silver bull Lior Gantz, editor of Wealth Research Group, discusses why he places silver at the top of his natural resource rankings.

I’m a silver bull. It’s the one asset class that has gone from bad to worse to nonexistent for most investors, and this is why Wealth Research Group places it at the top of our natural resource rankings.

How did this precious metal bring so much desperation and frustration to investors? 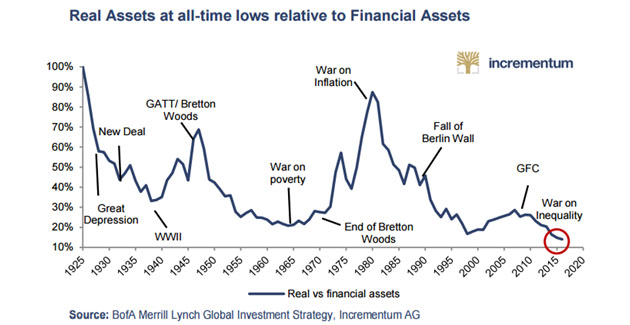 Real assets (commodities) haven’t been this cheap in a century.

It brought about experimental financial practices and the need to create a “wealth effect,” which has probably skipped you if you’re not a multimillionaire and is why you’re completely ready for a complete makeover of the system we are ruled by.

This transition has not gone unnoticed by money-hungry, power-driven politicians, which are capitalizing on the renewed rise of populism.

We are transitioning away from monetary policy (Fed intervention) to fiscal policy (government intervention). Trump’s infrastructure plan, his tax plan, and his defense plan are only the beginning.

Financial assets are rising into uncharted territories, while disposable income is mostly declining. In other words, for eight consecutive years, our financial system has transferred immense amounts of paper wealth to the elite.

This has brought about the rise of cryptocurrencies, among other effects, and the disgust voters have for the establishment has been growing.

Since the economy was slow, materials and industrials were deemed “dead assets,” and because of low interest rates, the financial sector wasn’t attractive either.

Out of the last 6,162 trading days going back to the beginning of 1993, the NASDAQ has been more overvalued than today with a market cap/GDP ratio exceeding its current level of 45.8% on a total of only 201 trading days, or 3.26% of the time.

The U.S. economy, by all measures, is currently operating at its full potential growth rate. This slow-growing economy can’t move any faster—debt is the overhanging cloud that prevents growth.

The U.S. economy always peaks as job growth reaches maximum employment, and then a recession follows.

This is the fate of the U.S. economy in the next few quarters as well.

What does this mean for silver, then?

As the U.S. enters a recession and interest rates are at prime levels for precious metals to rise in price, investors will look for new sources of growth, and like I said, nothing is as certain as infrastructure programs, both in the U.S. and China.

Higher inflation rates, a weaker dollar, and cheap Chinese shares have propelled silver from its lows in the early 2000s to close to $50 per ounce at its peak a number of years ago.

It’s the only commodity 66% cheaper than 37 years ago.

It has sucked the lifeblood out of even the most rigid bulls, but the ones who have slowly accumulated and have created a cash hoard in order to catch the move up once the U.S. equities market contracts will have a story to tell their grandchildren.

Silver stocks are considered the most volatile equities in the world, therefore you’ve seen a move away from risk as the price of gold subsided, apart from that 2016 epic, short-lived bump.

The trend is now reversing.

2016 marked the first year since 2012 where gold prices in all major currencies have risen.

As interest rates rise, investors no longer need to own an overweight position in dividend stocks as a means of achieving yield, as inflation is eroding those yields.

Instead, in times of inflation, the investment community flocks to commodities, and value investors, especially those like Bank of America Merrill Lynch Global Research’s chief investment strategist, Michael Hartnett, see the move towards real assets as one of the major themes for 2017–2018.

The index is down by 75% from the historical median, which translates to a 400% upside just to reach equilibrium, but the juniors will perform much better than that.

Here’s how you need to play this:

A real breakout will happen with gold initially, and the price we’re looking for is $1,300.

2. $1,300 Per Ounce: This is an “all clear” signal. Do what you will, but it basically means that sellers will be few and buyers will be plentiful.

Wealth Research Group will be as aggressive as early 2016, as we know these rare moments are critical.

I urge you to prepare yourself in three ways:

3. Emotional Discipline: This is a time-sensitive market—you’ll want to be at your best.

Lior Gantz, an editor of Wealth Research Group, has built and runs numerous successful businesses and has traveled to over 30 countries in the past decade in pursuit of thrills and opportunities, gaining valuable knowledge and experience. He is an advocate of meticulous risk management, balanced asset allocation and proper position sizing. As a deep-value investor, Gantz loves researching businesses that are off the radar and completely unknown to most financial publications.