Today, the Central Bank of the Russian Federation issued its official December 2015 reserves and other foreign currency assets report. The report indicated that Russian gold reserves increased by 700,000 ounces from its November 2015 report to 45.5 million ounces.

Since 2009 Russia has added more than 805 tons of gold to its reserves more than China who added (709 tons) during the same time period.

From August to December 2015 China added 85 tonnes of gold to its reserves, while Russia added 127 tonnes. 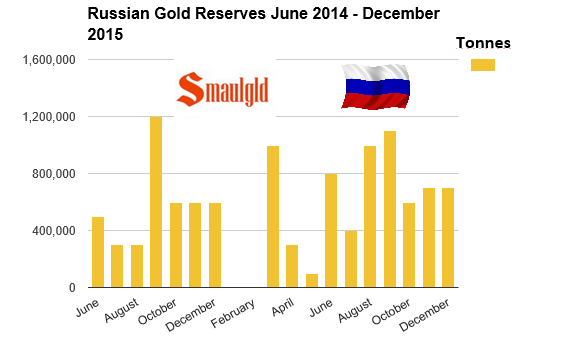 Russia’s massive additions to its gold reserves come at a time when they are seeing their biggest decline in wages and retail sales since 1999 and a massive drop in the value of the rouble.

Russia’s top central banker Elvira Nabiullina said recently “Regarding gold and foreign currency reserves, we have the desired benchmark of $500 bln, and not in the three-year term, it could be 5-7 years and more. We believe it is necessary in terms of creating additional financial cushion for the state in the face of such external uncertainties.”

Russia has been rebalancing its foreign reserves to favor gold vs. U.S. Treasury Bonds. Russia’s gold buying binge had coincided with a steady sell off of her U.S. Treasuries.

It might be expected that as Russia increases its foreign reserves it would do so at least in proportion with that of its current gold reserves.