Any basic economics class will inform you that protectionism is the opposite of free trade and the opposite of the harmony of nations. “The philosophy of protectionism is a philosophy of war. The wars of our age are not at variance with popular economic doctrines; they are, on the contrary, the inescapable result of consistent application of these doctrines.” Mises said.

There is no fixity in that direction. Trump’s protectionist policies are sure to fail!

And they are sure to dismantle all the benefits of free trade that have accumulated over the decades, even if through somewhat dysfunctional government created trade agreements.

Maybe that’s just what our controllers – the ones at the highest level – want.

People are hopeful enough and desperate enough to believe that things are headed in the right direction. Many are relieved that Trump won the presidency and for this reason they want to give his economic programs a try.  Just like socialism, protectionism “sounds good”, but in real life it is destructive.

Additionally, he is being presented as an elite upsetter, a blunt-talking part of a “popular” wave that will usher in a brighter tomorrow. If only it were so!

Mind you, his rhetoric certainly sounds great. He has talked about reducing taxes, which theoretically would be a step in the right direction.  But without a spending reduction or privatization plan to offset this drop in state revenues, that’d also mean the total US public debt would go even higher.  And, he has backed off a lot of his tax reduction talk as a result since being elected.

He has talked about “draining the swamp”, but most of his appointees are crony capitalists, Wall Street insiders and the same old neocons who regularly inhabit the swamp.

Now, as though he was running out of populist charm, he is talking about protectionist policies in order to “save jobs” by placing a 35% tariff on companies who leave the US and begin importing products into the country that are made elsewhere. 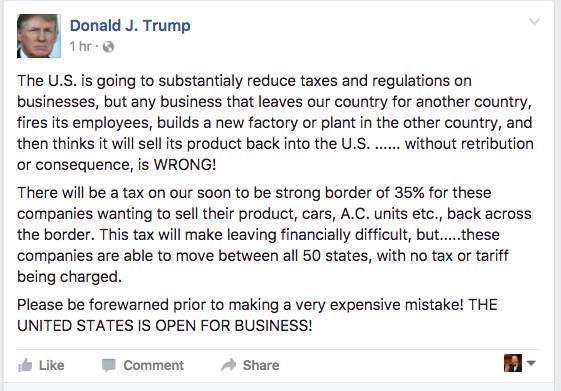 But this will not help the overall US economy. In fact, it will worsen it. As Ron Paul has stated before in layman’s terms, the expense of a tariff is simply passed along to the consumer. 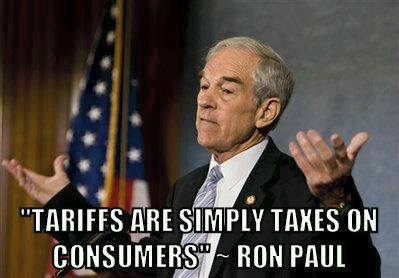 The trouble is that people forget, they are both producers and consumers. When companies “export” jobs they are trying to save on costs, which get passed on to consumers when there is competition. When Ford opens up a car plant in Mexico in order to save on certain costs, it produces cheaper cars for people, creating savings that can be used to acquire other goods.

Economists have long known that what counts is not money wages, but your real wages, i.e., what your wages can buy. If you can buy more and more stuff with the same wages then that is growth, that is what creates more jobs, with savings left over to buy other goods.

Rising living standards means that your wages can buy more stuff. Higher profits allows companies to expand, to invest more. Trump should be looking at the labor monopolies (unions), the central bank and government interference at home if he wants to create jobs.

To give a medical analogy, Donald is going to come in and start making surgical incisions without thinking about the symbiotic nature of the organs he will cut through and the implications of the veins being severed. He is not recognizing the totality of the problem.

In “I, Pencil,” Leonard Read made the point that not one person on this planet knows how to make a pencil. It takes the coordination of different companies and different individuals with different skills all over the world contributing to it, but not one person could tell you how to make one in full and where all the elements are sourced. This is the wonder of the market.

It allows millions of investors to coordinate their plans bottom up.

Last week Donald boasted that he had reached an accord with United Technologies, Carrier’s parent company, to preserve 1,100 of the jobs which would have otherwise been outsourced to Mexico. Later, the Union found out that only 730 of the production jobs would remain and that 550 of its members would lose theirs. None of this should be surprising though considering Donald’s tendency to perpetuate falsehoods and flip flop on his political positions.

The US, at one point in the distant past, became so great because it had free trade, low taxes, low regulation, reasonable government debt, no protectionism and a central bank that, up until a point (1971) was restrained from inflating too much due to the link of the dollar to gold.

That’s all gone now.  The US now has some of the highest taxes in the world, one of the most regulated markets, the most indebted government in world history, a central bank that has had 0% interest rates for eight years and Quantitative Easing to infinity… that’s why there are so many problems in the US today.

Free markets create wealth.  Putting in tariffs, fines and regulations on the ability of capital and labor to move, only makes things worse.

Sure, many people in the US might cheer as they find out their factory isn’t going to get shut down as expected due to these actions.  But, with higher costs to produce in the US, due to all the taxes and regulation, that will mean prices will increase dramatically.

And, this at a time when the majority of people in the US are living paycheck-to-paycheck.

If all the items at Walmart that are currently mostly imported from China were made in the US you’d see percentage price increases in the triple digits.

In other words, get ready for the food riots.

Plus, if Trump really institutes protectionism, there will be less demand for the US dollar which will cause its value to drop dramatically.

This, of course, is very good for things like gold and bitcoin…. But very bad for your average American and the US economy.

Now is the time to start moving your funds into these kinds of assets so that you can not only preserve your wealth, but also expand it exponentially – as soon as the US dollar starts to crack people will flock in droves to these kinds of safe havens.

To find out more on how to shelter yourself from the upcoming calamity via gold and bitcoin and to receive a free copy of our book, Getting Your Gold Out Of Dodge, click here.

To see more of my views on the changes in store under a Trump presidency, check out this interview I did with Luke Rudkowski of We Are Change.