In an excellent interview with Bloomberg, Jim Rickards correctly states that the Fed is completely insolvent on a mark to market basis, that the stock market is up over gold since 2010 because The Fed is manipulating stocks up and gold down, and urges investors to prepare for a dollar collapse by rotating OUT of stocks, and into PHYSICAL assets.

Gold has eked out further gains today and is trading near its highest in 2 and a 1/2 weeks. It is on track for its best week in a month after equities fell sharply and due to renewed concerns that the U.S. Federal Reserve continuing their unprecedented ultra loose monetary policies.

Gold looks set to continue its recovery from last year’s battering due to still robust demand from India, China and increased safe haven demand due to much more pronounced geopolitical risk. The technicals have reversed and they and momentum are favouring gold again.

Bullion, already supported by significant tensions between the West and Russia, got a further boost on Wednesday when the Fed’s March meeting minutes showed that the Fed are not keen on increasing interest rates straight after the wind-down of bond purchases.

Certain members of the Fed appear to realise that the economy and asset markets are now very dependent on near zero per cent interest rates and continuing debt monetisation. 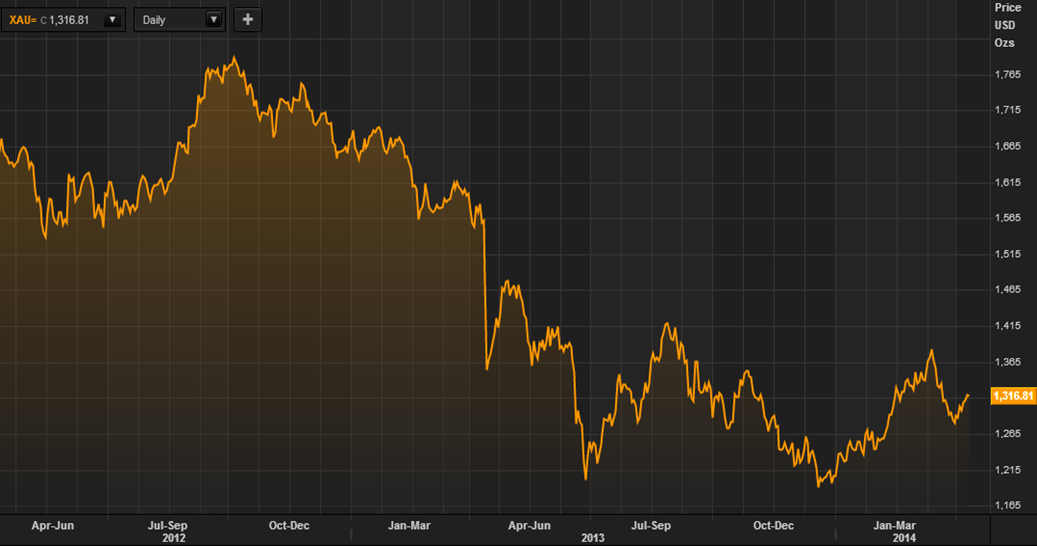 The Fed’s tapering is largely priced into the gold market. What is not priced in is the real possibility that a weakening U.S. and global economy will lead to the Fed having to increase QE to previous levels and possibly even increase QE above the $85 billion level. The market is completely discounting this and we believe that this is a not negligible risk.

These anomalies would appear to more than coincidental. They may be due to traders painting the tape or manipulation through HFT and computer trading. Goldman Sachs have been very vocal in their bearishness on gold at quarter ends. It is worth considering whether there is an attempt to “jaw bone” gold prices lower.

Silver continues to be favoured by contrarian investors who see it as oversold and very undervalued vis a vis other assets, including gold. 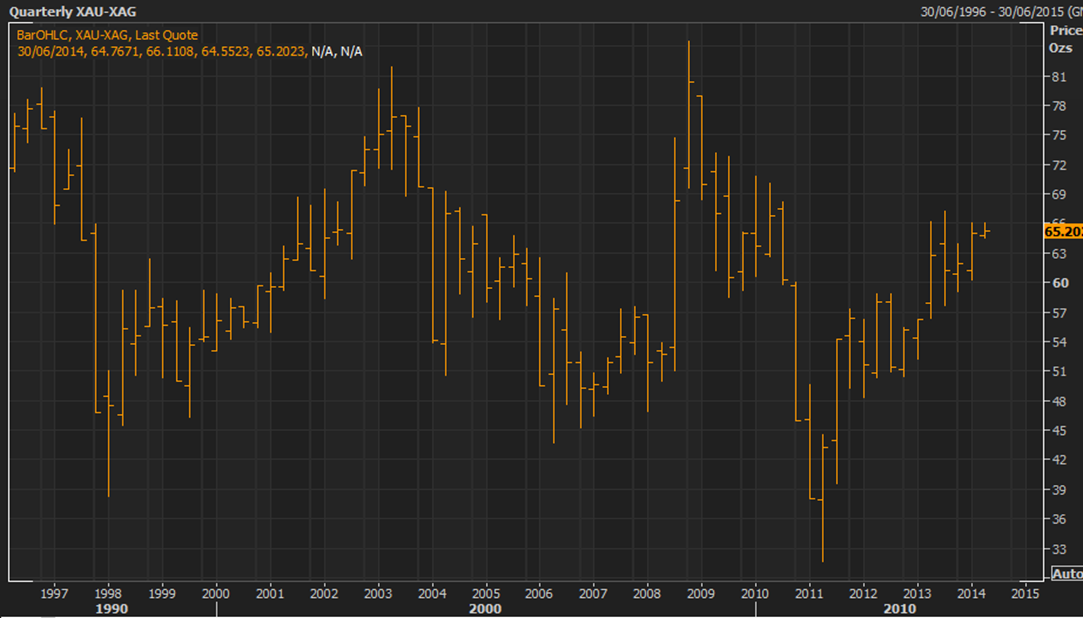 The gold/silver ratio is now at 65, meaning that with one ounce of gold, one can buy 65 ounces of silver. The historic average throughout most of history is 15 to 1. Even in the 20th Century, the century in which silver was demonetised, the gold silver ratio averaged around 40.

We believe the ratio will revert to the mean average again in the coming years. There are a number of reasons that silver should revert to the long term historical mean but the two primary ones are the fact that geologically in the earth’s crust there are fifteen parts of silver to every one part of gold.

Sunshine Mint Silver Eagles With Microengraved Security Feature
Only 95 Cents Over Spot, ANY QTY at SDBullion!

Secondly, silver is used in many industrial, medical and technological applications today including photovoltaic cells in solar panels. Since the Industrial Revolution and in recent times, a huge amount of silver has been used up in industry. Silver is unlike gold in this regard. Rather it is akin to oil and other consumable commodities in this regard. 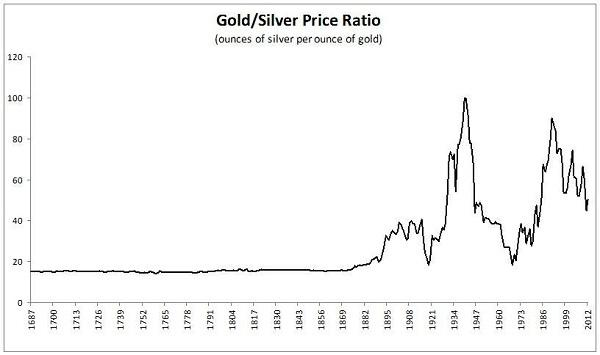 Thus, importantly silver is an attractive hybrid of commodity and precious metal used by investors as a store of value.

Thus, for every ounce of gold in the world today, there is less than 15 ounces of silver. Passionate silver buyers or “silver stackers” say the actual ratio of above ground refined silver to above ground refined gold is close to 1 to 1. Even if one uses a conservative number of 20 to 1, it shows that silver remains very undervalued versus gold. The supply demand equation in silver has gotten much more favourable in recent years and gets more favourable with every passing year.

For this reason we remain very confident that silver will surpass its 1980 record nominal high of $50/oz in the coming years. Indeed, the inflation adjusted high of $140/oz remains a viable price target in the long term.

Silver will in the coming years reward the patient, long term investor and buyer.

PREPARE FOR DOLLAR COLLAPSE WITH 10% TO 33% ALLOCATION TO GOLD

James Rickards, author of best selling book, Currency Wars and now The Death of Money: The Coming Collapse of the International Monetary System has done another great interview, this time with Erik Schatzker and Stephanie Ruhle from Bloomberg Television’s “Market Makers.

Topics covered included the risk of a deflationary collapse and depression, the risks of printing and creating too many dollars, the manipulation of gold and the importance of focusing on the long term and not just trying to make money in the short term but rather on preserving wealth.

DEFLATION AND THE RISK OF COLLAPSE
“The system is now larger than 2008 — make the system bigger and you’re going to have a bigger collapse…we are further down the timeline,” Rickards warns.

“Are you going to believe me or the IMF? I have a little better track record.”

“The ultimate thesis is that deflation is the biggest problem in the world.”

“The world wants to deflate but central banks and governments cannot have deflation – it increases the debt-to-GDP ratio, destroys tax collection, creates bad debts and hurts the banks.”

“So central banks will do anything to avoid deflation. The way they do this is to print money. But if you print too much money then you’ll collapse confidence in the U.S. dollar.”

“The U.S. dollar is ultimately backed by confidence, as also said by Paul Volcker.”

“The Fed is insolvent on a mark to market basis. I came to this conclusion myself, but insiders have also told me this privately…they won’t say it publicly.”

“Money is a perpetual non-interest-bearing note issued by an insolvent central bank.
How long can that go on before people walk away from it?”

The 1oz Silver Peregrine Falcon Available at SDBullion as Low as $2.99 Over Spot-
The 1st Coin in the RCM Birds of Prey Series!

DEPRESSION
Rickards questions the consensus mantra of recovery and asserts that “we are in a depression and we have been in one since 2007.”

“But we should have been much stronger today. We should be having 7% growth now. We can’t have 7% for a long time, but we can for a short time while people come back into the workforce.

“So I would much rather have a little pain up front and then have robust growth”.

WHY SHOULD PEOPLE CARE HOW MUCH MONEY THE FED PRINTS?
In answer to the assertion that investors should not care how much is printed, Rickards points out that “the Fed’s safety net of printing has holes in it.”

“The Fed could legally print more than the $4 trillion they’ve already created — $8 trillion, $12 trillion, $16 trillion. Some people say that they can do that — legally they can but my view is that that will destroy confidence at some point.”

“People say why doesn’t the Fed just forgive the Treasury debt and make $4 trillion go away? They could do it legally but what would that do to the confidence?”

ECONOMY NOT RECOVERING
Rickards questions the assertion that the economy is recovering.

“The Fed said we had “green shoots” in 2009. Timothy Geithner declared a recovery in 2010. Nobody has a worse forecasting record than the FED. They do a one-year forward forecast each year…they have been wrong and off by orders of magnitude every year.”

“I care. I think we all should all care.”

THE CURSE OF THE 2 SECOND ATTENTION SPAN
People are investing based on what they think is going on right now, because they have “the curse of the 2 second attention span…So when the stock market is down 30% a couple of years from now, you can kiss those investments goodbye.”

“I talk about this in Chapter 3 of The Death of Money’ the Fed is manipulating every market in the world with zero interest rates…I don’t like to be in manipulated markets…I’d rather be in things that retain their value”.

RESULTS: GOLD VERSUS STOCKS
Bloomberg TV’s Erik Schatzker brings up a chart and points out that “March 9, 2009 was the bottom of the equity market. Since then the S&P has returned 170%. Gold is up 40% and hedge funds are up 20%.”

In answer to this question regarding gold’s underperformance versus stocks since stocks bottom in 2009, Rickards says, “this is exactly the chart I would expect to see if the market is manipulated by zero interest rates and margins sending stocks higher, and gold being manipulated lower.”

GOLD MANIPULATION
“The IMF sold 400 tonnes of gold in 2010. We know 200 tonnes went to India and Sri Lanka. Where did the other 200 tonnes go that they dumped on the market? They are funded by U.S. taxpayers but they are not being transparent.”

“If you manipulate stocks higher and manipulate gold lower, then you’ll see the chart from 2009 looking as it does.”

DATA MINING
Rickards points out that the chart is an exercise in data mining as they have cherry picked the bottom for stocks. “If you look back from 2000 you’ll see a very different chart”.

MAKE MONEY OR PRESERVE WEALTH
When asked what people should be doing with their money, Rickards says that he has “always recommended about 10% gold, not all in, not 50%”

Because you could make money today and lose it tomorrow.

Or you can preserve wealth.

We talk about the ‘old money’ in the U.S. , the 100 year money, and the ‘new money’. When you go to Europe, some of that money is 400 or 500 years old…and you say how did you survive the Thirty Years War, Napoleon and World War I etc. and they will say…

And a little cash to run your jet and your yacht” he jested.

“That’s how you preserve wealth for the long run.

If you want a short pop go buy some stocks.”

It is a very interesting interview and we like the conclusion where he said investors can all make money in the short term but we can lose it just as easily.

Rickards does not expressly say one should put 33% of one’s wealth in gold but suggests that an allocation of between 10% and 33% would be prudent. In this regard, he echoes Dr Marc Faber who suggested a 25% allocation to precious metals to us last week.

Wealth preservation is something we have talked about since 2003. Indeed, our mission statement is to protect, preserve and grow the wealth of our clients.

The interview with James Rickards can be watched here: Should Investors Prepare for a Dollar Doomsday?