Technical analyst Jack Chan sets forth data that signals the potential return of a bear market in the precious metals.

A follow up to our last week’s special update: COT data has been instrumental in guiding us and helping us navigate market conditions during a bull and bear market. The latest COT data is quite alarming, and has our full attention going forward.

Long-time readers are familiar with the chart above, and it is self-explanatory. But for newcomers, here is a detailed breakdown:

• A bull market attracts speculators and the net long positions at both tops and bottoms are significantly higher of those in a bear market. Common sense.

• The price spike in 2016 attracted a record crowd with 280k net long positions at the 2016 summer top, giving us hope that a new bull market was in progress.

• However, the sharp sell-off into December reduced the net long positions to 96k, which was much lower than average bull market value at bottoms.

• Since December, prices have recovered about half, while net long positions only reached 164k, which is a bear market value. 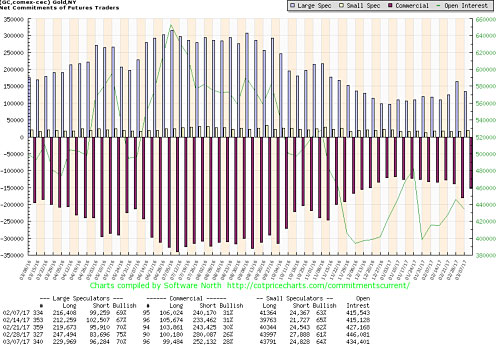 COT data this week shows a sharp pull back, confirming a peak in speculation, with the peak at bear market value. 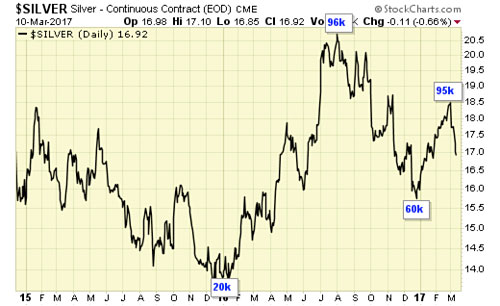 The speculation in silver is even more alarming. Net long positions reached 95k this week, barely lower than the recovery peak of last summer, and yet the price of silver is 10% below that peak. 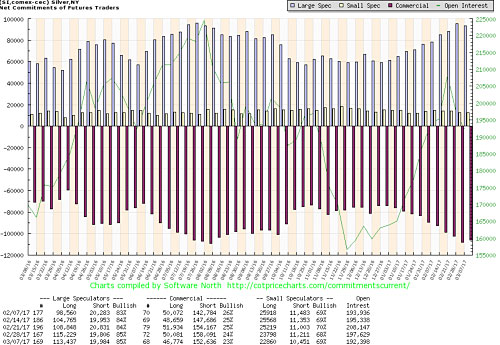 Speculators in silver also retreated this week, confirming the previous week as a speculative peak.

Summary
We have been monitoring COT data for the past seventeen years, and by observing speculative activities, it has helped us to identify the speculative values of a bull and bear market. The latest data has alerted us to the potential return to a bear market. Caution is advised.

Jack Chan is the editor of simply profits at www.simplyprofits.org, established in 2006. Chan bought his first mining stock, Hoko Exploration, in 1979, and has been active in the markets for the past 37 years. Technical analysis has helped him filter out the noise and focus on the when, and leave the why to the fundamental analysts. His proprietary trading models have enabled him to identify the NASDAQ top in 2000, the new gold bull market in 2001, the stock market top in 2007, and the U.S. dollar bottom in 2011.