There continues to be a lot of misinformation on the internet, even on the alternative media.  So, I thought I set the record straight.
Yes, it’s true…. the facts show that the U.S. peaked in silver production a century ago.
That’s correct, 100 years ago.

In my recent article, U.S. Silver Production Drops Significantly Again In October… Has Peak Silver Arrived?, I wrote about the recent steep drop in U.S. silver production and how this was a likely trend for many countries in the future .  I also stated that if the global economy went into the toilet in 2016, then I believe Peak Silver is already here.

I had some interesting emails and tweets in response to this subject.  Our friends at Smaulgld replied with the following tweet: 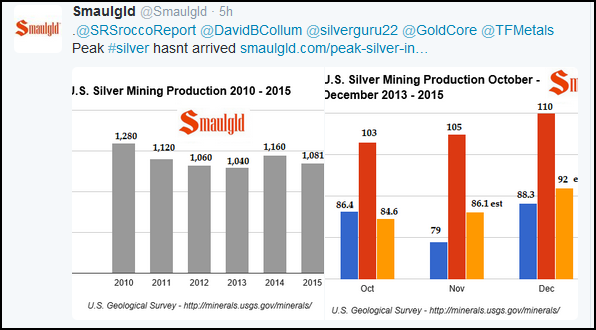 As you can see, Smaulgld responded by saying,“Peak #Silver hasn’t arrived.”  While the folks at Smaulgld have put out some excellent work on the precious metal industry as of late,their recent response wasn’t one of them.  However, we thank them for the effort and motivation to set the record straight on this issue. 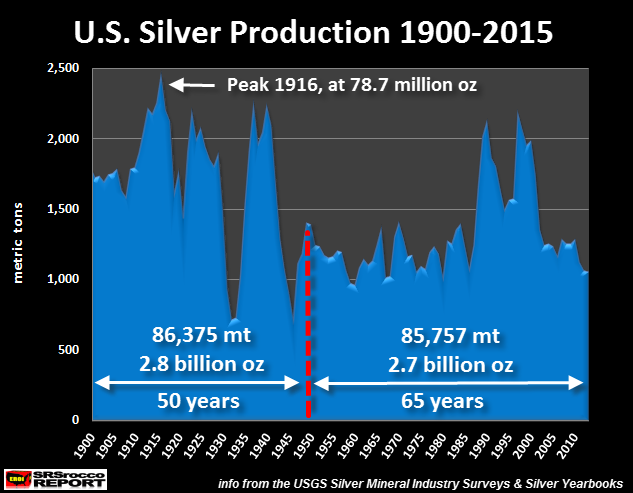 Second….. the majority of the top eight states had peak silver production back in the late 1800’s and early 1900’s.  Here is Chart#3 (of 48 charts) from my THE SILVER CHART REPORT.  It shows the peak year of silver production for each state: 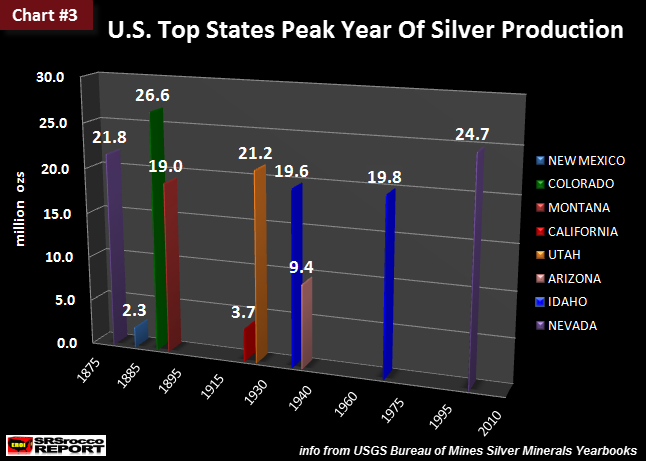 Here we can see that three of the states (New Mexico, Colorado & Montana) peaked before 1900 and three more (California, Utah & Arizona) peaked before 1940.   Amazingly, Colorado produced 26.6 Moz of silver in one year (1892), with only human-animal labor utilizing low-tech picks and shovels .  On the other hand, there are two different peaks for Nevada and Idaho showing how modern technology impacted production in these two states.

Regardless, most of the high-quality, high volume silver production from these states was produced prior to 1940.  So the “Glory Days’ of U.S. silver production are over.. and over for good.  According to the USGS, the United States only has 25,000 mt of silver in reserve.  That’s about 804 Moz.  However, I doubt a significant percentage of these reserves will ever be extracted.

Here is a chart showing the McCoy-Cove Gold-Silver Mine and Nevada silver production: 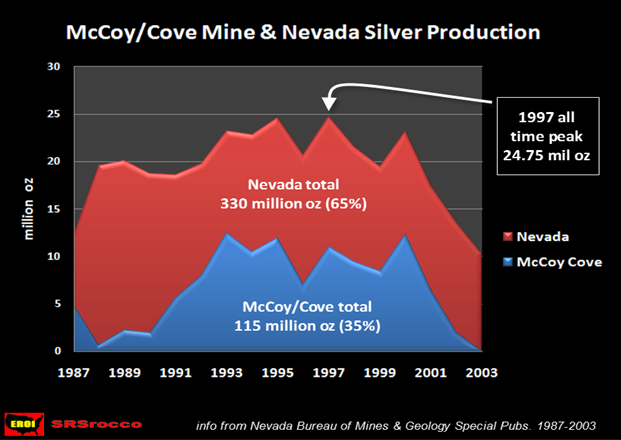 Lastly, as I mentioned in my previous article linked at the top of the page, it’s becoming increasingly difficult for the world’s Central Banks to continue servicing the massive debt on their books currently.  This is precisely why the United States and many other countries have had ultra-low or zero interest rate policies.

The only way to continue growth is to add a larger percentage of debt… but this is now becoming impossible.  Thus, the collapse comes as ancient Roman Philosopher Lucius Seneca described over 2,000 years ago. 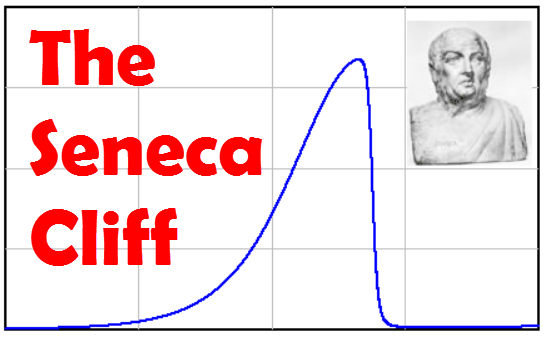 Lucius Seneca: “It would be some consolation for the feebleness of our selves and our works if all things should perish as slowly as they come into being; but as it is, increases are of sluggish growth, but the way to ruin is rapid.”Lucius Anneaus Seneca, Letters to Lucilius, n. 91 (courtesy of Ugo Bardi)

As Seneca states…. increases are of sluggish growth, but the way to ruin in rapid.

2016 looks like it could turn out to be one hell of a year.  It will be interesting to see just how well the world’s paper assets survive the forces of Seneca’s Cliff.