In just a little over a week the BRIC summit will take place in Brazil. A couple of key topics at the summit will be the promotion of two major projects, the BRIC Development Bank and the establisment of an emergency reserve fund for the BRIC nations.   While these events are US dollar negative, we can expect not much will be said at the summit about the dollar. In fact, the talk leading into the summit is that the BRIC bank is still 1-2 years from lending money.
But if you look elsewhere, a direct attack on the US Dollar appears to be underway right now. 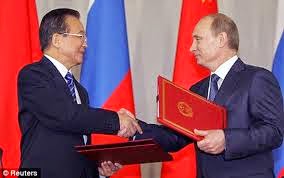 This Voice of Russia article is bluntly titled “BRICS Morphing into Anti-Dollar Alliance“. And the article does not mince words that a direct attack is underway led by Russia with the blessing of the other BRIC nations. Here is headline summary (in bold)  and some key quotes from the article.
“Before the crucial visit to Beijing next week, the governor of the Russian Central Bank, Elvira Nabiullina met Vladimir Putin to report on the progress of the upcoming ruble-yuan swap deal with the People’s Bank of China and the Kremlin used the meeting to let the world know about the technical details of its international anti-dollar alliance.”
On June 10th, Sergey Glaziev, Putin’s economy advisor published an article outlining the need to establish an international alliance of countries willing to get rid of the dollar in international trade and refrain from using dollars in their currency reserves. The ultimate goal would be to break the Washington’s money printing machine that is feeding its military-industrial complex and giving the US ample possibilities to spread chaos across the globe, fueling the civil wars in Libya, Iraq, Syria and Ukraine.
“Glaziev’s critics believe that such an alliance would be difficult to establish and that creating a non-dollar-based global financial system would be extremely challenging from a technical point of view. However, in her discussion with Vladimir Putin, the head ofthe Russian central bank unveiled an elegant technical solution for this problem and left a clear hint regarding the members of the anti-dollar alliance that is being created by the efforts of Moscow and Beijing:
“We’ve done a lot of work on the ruble-yuan swap deal in order to facilitate trade financing. I have a meeting next week in Beijing,” she said casually and then dropped the bomb: “We are discussing with China and our BRICS parters the establishment of a system of multilateral swaps that will allow to transfer resources to one or another country, if needed. A part of the currency reserves can be directed to [the new system].”
“It seems that the Kremlin chose the all-in-one approach for establishing its anti-dollar alliance. Currency swaps between the BRICS central banks will facilitate trade financing while completely bypassing the dollar. At the same time, the new system will also act as a de facto replacement of the IMF, because it will allow the members of the alliance to direct resources to finance the weaker countries. As an important bonus, derived from this “quasi-IMF” system, the BRICS will use a part (most likely the “dollar part”) of their currency reserves to support it, thus drastically reducing the amount of dollar-based instruments bought by some of the biggest foreign creditors of the US.”
“If the current trend continues, soon the dollar will be abandoned by most of the significant global economies and it will be kicked out of the global trade finance. Washington’s bullying will make even former American allies chose the anti-dollar alliance instead of the existing dollar-based monetary system. The point of no return for the dollar may be much closer than it is generally thought. In fact, the greenback may have already past its point of no return on its way to irrelevance.”
==========================================================================
My added comments:

This Voice of Russia article could not be more clear. Just look at the concluding paragraph which states:

“soon the dollar will be abandoned by most of the significant global economies and it will be kicked out of the global trade finance. Washington’s bullying will make even former American allies chose the anti-dollar alliance instead of the existing dollar-based monetary system. The point of no return for the dollar may be much closer than it is generally thought. In fact, the greenback may have already past its point of no return on its way to irrelevance“.

And the article even provides some details on how the attack will be carried out. Using new currency swaps between BRIC nations they will make sure the US dollar is bypassed in all trade agreements these countries have. China has been doing that already with this being the latest news on that.
But there is more. The article talks of a “de facto replacement of the IMF” by setting up development funds for weaker countries. The article says the BRIC nations will use their US dollar currency reserves for this purpose. This not only allows them to compete with the IMF in providing funds to nations in distress, they will basically be dumping their US dollar reserves in the process. The article says “drastically reducing the amount of dollar-based instruments bought by some of the bigger foreign creditors of the US” (Russia and China).
In case that language is a little confusing, let’s try to translate. They appear to be saying they are going into full attack mode on the US dollar based monetary system by cutting the dollar out of world trade and using their US dollar reserves (like US bonds for example) to fund an IMF like lending facilitiy. And just to make sure they get the point across they state this means they will be “drastically reducing” any buying of US bonds.
Since the US FED is already the biggest buyer of US bonds now and the US is going to continue having deficits, this is a clear and direct attack on the US. If the BRIC’s stop buying US bonds (and even start dumping them to setup this IMF like fund), this will create enormous pressure on the US FED. If the FED keeps trying to taper (cut back buying US bonds) who will take up the slack? This could eventually force the US FED to reverse course and ramp up US bond buying again. That would likely cause the markets to selloff the US dollar in reaction for sure.
So this is all very serious. Even as the BRIC leaders will probably attend the upcoming summit with smiles and no mention of the US dollar, it is clear that a full scale attack on the US dollar based system is now planned and in its beginning phase. This could certainly lead to major monetary system change. The Voice of Russia article issues an ominous warning at the end when it says “The point of no return for the dollar may be much closer than it is generally thought. In fact, the greenback may have already past its point of no return on its way to irrelevance“.
Of course we will take this seriously and cover it here as things unfold.

Update 10:00 pm (CST): Reuters runs this article which suggests US-Russian relations are not very good right now. Here is a quote from near the end of the article:

“Another senior (Russian) official goaded the United States by challenging its domination of world affairs. “The hegemony of the U.S. on the world stage is over,” Yevgeny Lukyanov, deputy head of the Russian Security Council comprising defence and security officials, told RIA news agency.”Update 10:50 pm (CST): More research related to this Voice of Russia article turns up this NY Times article where now we have French officials issuing threatening statements about the US dollar after the US hits a French bank with huge sanctions (an event mentioned in the Voice of Russia article). Below is a quote from this NY Times article:

“The dollar clearing at issue in the BNP Paribas (French bank) case was conducted in the United States. But, said a person with direct knowledge of the negotiations, there is concern that using dollars in international trade could ‘‘trigger risks even if you do things outside the United States, because one day the dollar you used may be seen as an opening for an extraterritorial application of U.S. legislation.’’
‘‘That means that using the dollar is now perceived as less safe than before the episode,and it will probably reinforce the willingness of many countries to trade as much as possible in other currencies,’’ the person added.”

The Revolution Has Begun!

Proof Version Limited to only 1,776 coins!
Each individually numbered Proof COA will specifically honor one of the 56 Original signers of the Declaration!

Only 10 numbered Proof COA’s With JOHN ADAMS, SAMUEL ADAMS, & THOMAS JEFFERSON Signatures!
COA’s #1 & #1776 will be adorned with JOHN HANCOCK & BENJAMIN FRANKLIN’S respective signatures- Each will be a ONE OF A KIND REVOLUTION PROOF COA distributed RANDOMLY among Proof Purchases!