/  Gold  /  Gold News  /  If You Thought The Cold War Was Over, Just Look At What Is Happening In Ukraine 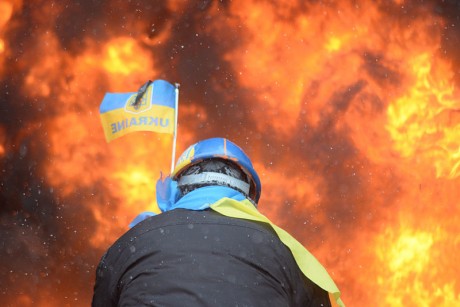 What is happening on the streets of Kiev right now is really a proxy war between the East and the West.  On the one side you have the USSA and the EUSSR, which are quite determined to bring Ukraine under their sphere of influence.  On the other side you have Russia (the former USSR), which is quite determined to keep Ukraine out of the EU and out of NATO.  In addition, Russia is extremely concerned about the strategic natural gas pipelines that go through Ukraine that transport gas from Russia to the rest of Europe.  Ultimately, it is not in the interest of the people of Ukraine to be dominated by either side, but that is going to be what ends up happening.  The Cold War is playing out on the streets of Kiev as you read this, and this conflict is going to greatly increase tensions between the East and the West.  As these tensions continue to rise, someday soon this Cold War could actually end up sparking a real hot war between the superpowers.

Tragically, it is the people of Ukraine that are paying the price for this proxy war.  During the recent unrest, at least 75 people have died, more than 500 people have been injured, and the streets of major Ukrainian cities are being turned into war zones.

You can see some amazing photos of the unrest in Ukraine right here, and you can find some startling before and after photos of Kiev right here and right here.

Violence has been committed by both sides.  For those that think that these are just “peaceful protests”, just consider the following…

In Ukraine, US-backed rebels seize weapons from a military depot and begin firing on police — killing at least ten. The rebel groups occupy and torch government buildings, trade union headquarters, the central post office, and political party headquarters. They occupy local government facilities in other cities and physically attack local authorities. Their goal is to overthrow the elected government.

It is no secret that this is a violent, high stakes struggle to seize control of Ukraine between the East and the West.  It is so obvious that even the New York Times is admitting it…

The two sides in what is developing into an East-West clash over Ukraine hardened their positions on Wednesday, with Russian officials denouncing what they called a coup by right-wing extremists, even as the United States and Europe threatened to impose sanctions on those responsible for the violence that has erupted in the capital, Kiev, and spread to other cities.

The starkly divergent reactions underscored the deepening confrontation between Russia and the West over Ukraine’s fate, with each side accusing the other of interference and disputing even the facts of what was happening.

And it is no secret that the “rebel groups” in Ukraine are being organized and funded by high-powered organizations in the United States.  In fact, as the following video by Paul Joseph Watson demonstrates, some of these organizations that are fueling the “revolution” in Ukraine are directly tied to George Soros…

Sadly, most of the people involved in this bitter conflict in Ukraine don’t understand any of this.

Most of them just want liberty, freedom and a better future for them and for their children.

Unfortunately, they are not going to get that no matter which side wins.

And Americans should not think that what is going on in Ukraine is not going to affect them.

The truth is that tensions between the United States and Russia have been rising for years.  This has been a constant theme through the recent Olympic Games.

Someday these tensions may erupt into a real conflict.

Most Americans tend to think of Russia as a “former enemy” that more or less collapsed at the “end of the Cold War” in the early 1990s.

But that is not the reality any longer.  Russia has experienced a massive economic resurgence over the past couple of decades, and according to one ranking Russia now actually has a larger economy than Germany does.

For much more on Russia’s rise as an economic superpower, please see my previous article entitled “The Rise Of The Bear: 18 Signs That Russia Is Rapidly Catching Up To The United States“.

In addition, Russia has also experienced a tremendous resurgence militarily.

Even as the U.S. decreases military spending, Russia is aggressively arming.  A while back, Russian President Vladimir Putin made the following statement…

“No one should entertain any illusions regarding their chances of asserting military superiority over Russia, we will never allow that to happen….thanks to our military doctrine and advanced weapons.”

Russia is in the process of recruiting hundreds of thousands of new troops, and according to Putin the modernization of the Russian armed forces will go to the next level in 2014…

“In 2014, the armed forces must receive more than 40 most modern intercontinental ballistic missiles, more than 210 airplanes and helicopters, more than 250 units of armored vehicles. Nuclear rocket carriers the Alexander Nevsky and the Vladimir Monomakh will take over the combat watch and six new satellites will reinforce the orbital grouping.”

Of most concern to many analysts is the nuclear attack submarines with “advanced stealth technology” that Russia is building.  The following is an excerpt from one of my previous articles entitled “New Russian Submarines Are So Silent That The U.S. Navy Calls Them ‘Black Holes’“…

Did you know that Russia is building submarines that are so quiet that the U.S. military cannot detect them?  These “black hole” submarines can freely approach the coastlines of the United States without fear of being detected whenever they want.  In fact, a “nuclear-powered attack submarine armed with long-range cruise missiles” sailed around in the Gulf of Mexico for several weeks without being detected back in 2012.  And now Russia is launching a new class of subs that have “advanced stealth technology”.  The U.S. Navy openly acknowledges that they cannot track these subs when they are submerged.  That means that the Russians are able to sail right up to our coastlines and launch nukes whenever they want.  But instead of trying to find a way to counteract this potential threat, the Obama administration has been working very hard to dismantle the U.S. strategic nuclear arsenal.

Sadly, the U.S. does not consider Russia to be a strategic threat any longer.  At the height of the Cold War, the U.S. military had more than 31,000 strategic nuclear warheads.  Today, it only has 1,550 and Barack Obama wants to reduce that number by another one-third.

Let us hope and pray that the United States and Russia never fight a real war with each other.

But as things in Ukraine and elsewhere continue to escalate, there is the very real possibility that this Cold War could escalate into something far, far worse someday.

And Russia is busy preparing for that eventuality.

In fact, did you know that Russia has more spies inside the U.S. today than it did at any point during the Cold War?

Most people that will read this article will not grasp the importance of it.  Hopefully you are not one of them.

What is happening in Ukraine right now has the potential to greatly alter the future of this planet.  A great game of chess is being played out, and those that assume that “America always wins” may be in for a great shock someday.