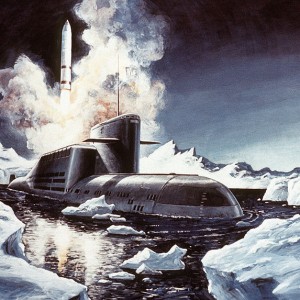 The Russian military is in the midst of a sweeping modernization program, and it is currently developing some incredibly impressive offensive and defensive next-generation weapons that are designed to be used in a future war with the United States.
The key to winning World War III will be to strike hard and to strike fast, and the Russians understand this.

Meanwhile, the U.S. military has totally shifted gears from a “Cold War mindset” and is now completely focused on fighting smaller regional wars in the Middle East and elsewhere.  As a result, U.S. strategic forces have suffered.  There has been very little effort to modernize, and many of our nuclear missile silos are using technology that is ridiculously outdated.  For example,CBS News has documented that eight inch floppy disks are still being used in many of our missile silos.  And don’t expect things to change any time soon.  At this point, the U.S. military plans to keep Minuteman intercontinental ballistic missiles that were originally deployed in the 1960s and 1970s in service until 2030.

What all of this means is that the Russians are feverishly preparing to fight World War III and we are not.  The following are just a few of the next-generation weapons that Russia will use against the United States during the next great global war…

The Sarmat (also known as Sarmatian) is a Russian liquid-fueled, MIRV-equipped, super-heavy thermonuclear intercontinental ballistic missile in development as of early 2015, intended to replace the previous SS-18 Satan and carry extensive counter-missile defense measures. Its large payload would allow for up to 10 heavy warheads or 15 lighter ones, and/or a combination of warheads and massive amounts of countermeasures designed to defeat the anti-missile systems. The Sarmat is expected to be ready for deployment around 2020, but other sources state that the program is being fast-tracked and it could comprise up to 80 percent of Russia’s land-based nuclear arsenal by 2021.

As you can see below, these missiles are extremely huge… 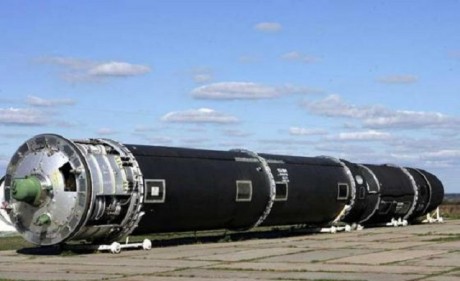 Of even greater concern than the Sarmat are the new Borey class nuclear submarines that Russia is building.  The following is from an article about the launch of one of these new submarines, the Vladimir Monomakh, in 2013…

The Borey Class submarine, dubbed Vladimir Monomakh, has a next generation nuclear reactor, can dive deeper than 1,200 feet, and carries up to 20 nuclear intercontinental ballistic missiles (ICBM).

Each of these “Bulava” ICBM’s can carry ten detachable MIRV warheads, what they call “re-entry vehicles,” capable of delivering 150 kiloton yields per warhead (luckily, tests of the warheads only yielded 11 “successes” out of almost 20 attempts). Which doesn’t mean they aren’t a concern, MIRV’s are what shook the Cold War to its foundation when they first appeared in the 1970s.

One of the primary things that has U.S. military planners worried is how quiet these subs are.  In fact, according to an RT article these subs are supposed to be “almost silent”…

It belongs to a class of missile strategic submarine cruisers with a new generation of nuclear reactor, which allows the submarine to dive to a depth of 480 meters. It can spend up to three months in autonomous navigation and, thanks to the latest achievements in the reduction of noise, it is almost silent compared to previous generations of submarines.

So why is that a problem?

Well, imagine a scenario where Russian nuclear subs approach our coastlines completely undetected and launch a barrage of missiles toward our cities and military bases.  We could be wiped out before we even knew what hit us.

If you don’t think that this could ever happen, just consider the following excerpt from a Fox News article published back in 2012…

A Russian nuclear-powered attack submarine armed with long-range cruise missiles operated undetected in the Gulf of Mexico for several weeks and its travel in strategic U.S. waters was only confirmed after it left the region, the Washington Free Beacon has learned.

It is only the second time since 2009 that a Russian attack submarine has patrolled so close to U.S. shores.

If we can’t detect them, how are we going to defend against them?  Here is a look at one of them in the water… 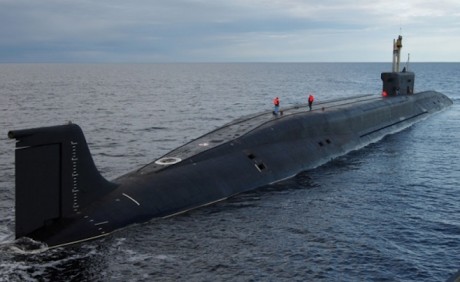 The Bulava (SS-NX-30) is the submarine-launched version of Russia’s most advanced missile, the Topol-M (SS-27) solid fuel ICBM. The SS-NX-30 is a derivative of the SS-27, except for a slight decrease in range due to conversion of the design for submarine launch. The SS-27 has is 21.9 meters long, far too large to fit in a typical submarine. The largest previously deployed Russian SLBM was the R-39 / SS-N-20 STURGEON, which was 16 meters long. Russian sources report that the Bulava SS-N-30 ballistic missile can carry ten warheads to a range of 8,000km. Other sources suggest that the Bulava might have a range of 10,000 km, and is reportedly features a 550 kT yield nuclear warhead. Apparently up to six MIRVs can be placed at the cost of offloading warhead shielding and decoys.

The Bulava is specifically designed to avoid interception, and each warhead is independently maneuverable to help ensure that they reach their targets intact.  The following was written by U.S. Navy Lieutenant Commander Tom Spahn…

Similar to its land-based variant, the Topol-M SS-27, to thwart evolving Western ballistic-missile-defense shields, the Bulava can conduct evasive post-launch maneuvers and deploy a variety of countermeasures and decoys to defend against interception. Its ten hypersonic, independently maneuverable warheads are protected against both physical and electromagnetic-pulse damage to ensure that they can reach their targets intact.

When nuclear missiles are in a stationary location (such as a missile silo), they can be pretty easy to target.  But if you put them on a mobile platform, you can gain quite a strategic edge.

With that in mind, the Russians have reintroduced the strategic missile train…

A ‘nuclear train’ – properly called BZhRK, short for ‘combat railway missile complex’ in Russian – is a mobile platform for transporting and launching strategic nuclear missiles. Similarly to nuclear submarines, such trains are hard to wipe out in a preemptive strike because of their mobility and ability to be disguised as regular freight trains.

The Soviet Union had 12 such nuclear trains, each carrying three RT-23 Molodets (SS-24 Scalpel in NATO disambiguation) missiles, but they were released from combat duty after Russia and the US signed the START-2 treaty in 1993 and eventually decommissioned.

Last year the Russian military said that nuclear trains – which are no longer banned under the New START treaty – would be revived.

Lastly, I want to discuss a very important weapons system that I recently mentioned in another article.

It is called the S-500 missile defense system, and it fundamentally changes the balance of power between the United States and Russia.

Once fully deployed, the S-500 will be able to intercept our intercontinental ballistic missiles.  This means that the concept of “mutually assured destruction” does not necessarily apply any longer.  If the Russians can take out most of our nukes with a devastating surprise first strike and intercept whatever we are able to launch back at them with the S-500, the cost/benefit analysis of a nuclear conflict completely changes.

The following information about the S-500 comes from military-today.com…

The S-500 is not an upgrade of the S-400, but a new design. It uses a lot of new technology and is superior to the S-400. It was designed to intercept ballistic missiles. It is planned to have a range of 500-600 km and hit targets at altitudes as high as 40 km. Some sources claim that this system is capable of tracking 5-20 ballistic targets and intercepting up to 5-10 ballistic targets simultaneously. It can defeat ballistic missiles traveling at 5-7 kilometers per second.  It has been reported that this air defense system can also target low orbital satellites. It is planned that the S-500 will shield Moscow and the regions around it. It will replace the current A-135 anti-ballistic missile system. The S-500 missiles will be used only against the most important targets, such as intercontinental ballistic missiles, AWACS and jamming aircraft.

Sadly, most Americans do not believe that there is even a remote possibility that we will ever fight a war with Russia.

As a result, most Americans will never see the point of articles like this one.

But over in Russia, anti-American sentiment is at an all-time high and many of their talking heads and intellectuals are now convinced that a shooting war with the United States is inevitable.