We have stated that Donald Trump would be the cause of a barrage of news and market movements.

He’s not even President yet and it has already begun.

In a Friday interview with The Wall Street Journal, Trump said the US dollar, which touched a more-than 14-year high about two weeks ago, has gotten “too strong,” against the Chinese yuan. He told the WSJ, “Our companies can’t compete with them now because our currency is too strong. And it’s killing us.”

The US dollar sank soon after and stock markets in Asia, Europe and North America were mostly down on Tuesday. Gold, silver and bitcoin all skyrocketed.

Bitcoin had a tremendous 2016, rising over 129% and spiking up to an average high of $1129.87 on January 4th. It then dropped dramatically after the Chinese government threatened to crack down on bitcoin exchanges, but has now risen nearly 17.5% in the last 7 days!

Will 2017 be a great year for the precious metals and bitcoin?

It’s all how you look at things and how you are positioned. Some on the internet admonished that “2016 was the worst year ever” because aging celebrities passed away. These people clearly have no idea what a “bad year” looks like.

Of course, it is true, we stand at the edge of a gaping chasm of debt. But, if you are prepared it can not only be survivable… but it can be profitable. Instead of worrying about what might happen, be like in the cartoon below: Purchase precious metals and bitcoin and don’t worry about Trump. 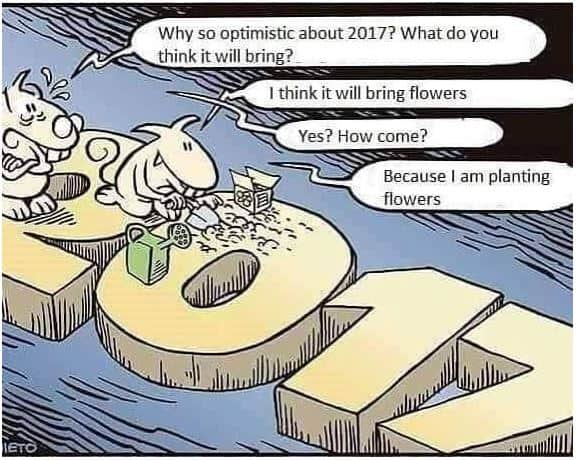 By worrying you are emitting negative energy which only attracts more negative energy. It also creates a lot of stress on your body which manifests in physical ill health.

Educate yourself by registering for our free live webinar on January 24th when TDV’s Senior Analyst, Ed Bugos, will release his top mining stock pick for 2017. It is trading at mere pennies but Ed thinks it will rise exponentially in the next 1-2 years.