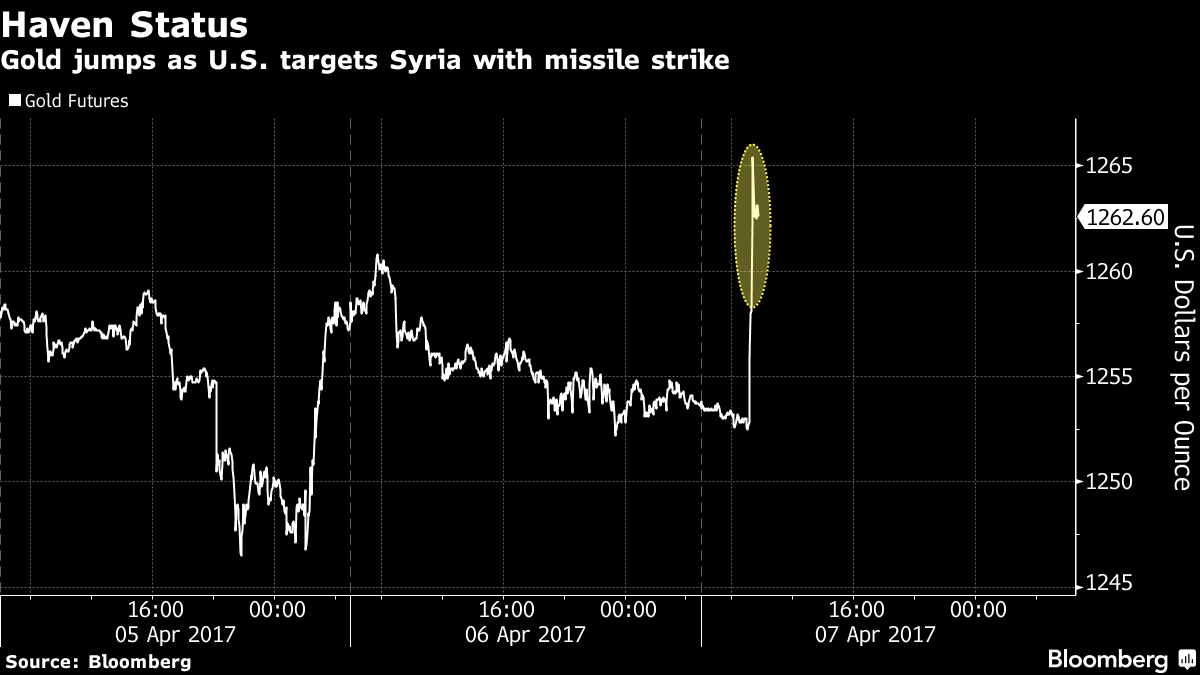 Gold and silver prices spiked sharply higher today, as investors piled into the safe haven asset in the wake of U.S. bombing of Syria.

Gold and silver bullion rose more than 1% and oil prices rose 1.4% after the bombings.

Gold reached a 5-month high as risk aversion returned to markets leading to a sell off in stocks and oil prices rising. Brent crude futures surged more than 2% after the US attack and were last up 1.5% at $55.72 a barrel.

Gold earlier climbed as much as 1.4 percent to its highest since Nov. 10 at $1,269.30. Gold is now trading at levels not seen since the November election of Donald Trump as U.S. president.

Gold is on track for a fourth straight week of gains and this in conjunction with the higher 2016 close and the higher Q1, 2017 close is bullish from a technical and a momentum perspective.

Gold has not managed to close above the 200 day moving average – $1,257/oz – in recent days and a weekly close above that level today will be very bullish for gold. This is especially the case given the very uncertain geo-political backdrop.

The unilateral action by President Trump and the use of cruise missiles against a Syrian air base, has escalated tensions with Syrian allies Russia and Iran.

Russia has denounced the U.S. ‘aggression’ and warned of ‘considerable damage’ to ties with the U.S. The Kremlin warned that “aggression against a sovereign state is in violation of international law.”

China warned against “further deterioration” in Syria and Iran said that the U.S. bombing was “destructive and dangerous.”

Markets were already nervous as Trump met Chinese leader Xi Jinping for talks over flashpoints such as North Korea and the U.S. massive trade deficits with China and massive and continuously increasing national debt.

Other geo-political concerns such as Brexit and the upcoming French elections is leading to ongoing robust demand for gold and silver bullion.