The following urgent communication from the legendary Jim Sinclair is not an easy read, “But it is the MOST IMPORTANT Read of Your Lifetime…“

I have asked Editor Dan to post Stockman’s article in total today on JSMineset because here is where we are now and where we are going in the future in a much larger way than anything before.

I have been looking for the reason for the Fed’s Chair visit at the White House recently. What this will do is bury the fiat currency system in terms of buying power. It is already dead as a storehouse of wealth. The carrot on the string to own money, interest rates, are presently history. This is what the present administration and its economic clone democratic candidate are counting on.
This is the substance that the meeting between the Federal Reserve and the White House was all about. This has just been made public down under by a Fed female personality where it is least apt to be publicly discussed. It is simple money printing hidden in complexity so you have to change your understanding of the expanded QE theory. If you will not first read this then make the effort, you are lost. Please make that effort.
Unless we get rid of the Fed we the 99% are all dead financially and literally.
There is no better reason to own the limited supply of gold that is above ground and therefor freely obtainable. It is the reason that this gold and silver market has many more years to move forward to the final price determined not in the paper gold make believe futures market, but the Real Free Gold cash physical market.
The bull market that never ended has many more years in front of it than you can imagine and a final and permanent price dictated by Russia and China. This is the world war of all world wars where there are no borders. This is why this is the last time to protect yourselves, the gold rally that you do not sell.
This financial power grab of all historical power grabs that you must understand, no matter how many times you must read the article below, will be discussed for years to come by the Freedom Bloggers of the modern world, as Patrick Henry was to the foundation of the Constitution. This work is to save you from yourselves via knowledge. This time it is the knowledge of the plan accepted by Chair Yellen at the recent and rare White house meeting between the occupant of the Oval Office and the occupant of the Chair.
We will work to help you, but this you must understand if you are to avoid the execution of everything we hold from the formation of this nation as true, good and holy. This is the end of all that. It has come. It is not coming in the future. It is here today.
It has the power to be the end of elections and permanent power resting between the oval office and chair, making the 1% the new aristocracy of the globe. You think Putin does not understand this? This proves one more time there are no atheists in the fox hole. War in a different form is now being practiced and all out application is close. GOTS while you can.
The end:
Standing watch, The western economic Texas Ranger and the man with the longest career in finance and metals anywhere – 56 years. The Sinclair/Holter combined effort to save the 99% from the 1%. 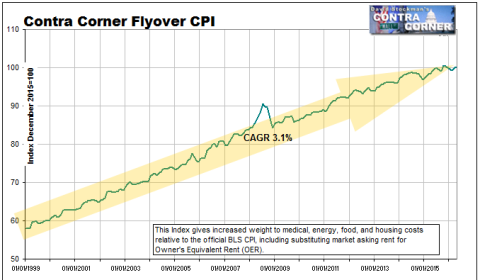 So the single most important thing that could be done by Congress to get the American economy functioning again would be to repeal the Humphrey-Hawkins Act and thereby eliminate the Fed’s legal basis for its rolling coup d’état.
At the same time, it could launch a modern equivalent of the Pecora hearings of the 1930s. Only this time they would be focused on the Fed’s role in generating massive Wall Street bubbles and their subsequent devastating collapses–including for what will soon be the third time this century.
Such a probe could readily bring to the surface what amounts to the raging elephant in the room of national economic policy. Namely, that the Fed’s massive intervention in the financial markets and its feckless pursuit of ZIRP and QE is a battering ram of dangerous and worsening financial instability.
But the Eccles Building and its 12 branch offices are so mummified in Keynesian groupthink that they cannot even see the obvious. Thus, in touting its next grab for helicopter money power, the aforementioned Cleveland Fed President let loose of the following whopper:
Maintaining stability in financial markets should not be an explicit goal for the Federal Reserve, which should use interest rates to head off a crisis only if more precise and better-suited tools fail, a top Fed official said on Tuesday…….Cleveland Fed President Loretta Mester said in remarks prepared for delivery in Sydney, adding that the Fed’s key price stability and maximum employment goals usually align with its desire for a stable financial sector.
Oh, c’mon. The purpose of the systematic financial repression by the Fed and the rest of the world’s central banks is to flush savers and investors out of the money market and out the risk curve.
That’s why there is $13 trillion of subzero sovereign debt and growing by the day. That’s why there is a mad scramble for yield; and that’s why the global financial system is riven with FEDs (financial explosive devices) waiting to be ignited.
Today, Fitch Ratings spotlighted one more example of the Fed’s destructive regime of Bubble Finance at work.
The trailing 12-month junk-bond default rate hit a 6-year high in June at 4.9%, says Fitch Ratings, highlighting the ongoing pain from the oil patch.
Energy companies defaulted on $28.8 billion of debt the first half of this year, Fitch calculates, putting the sector’s default rate at 15%. For exploration and production, the rate is 29%.
A 29% default rate in the E&P sector!
Does Ms. Mester really believe that in a honest free market several hundred billions of high yield debt could have been sold by the rank commodity speculators who ply the shale patch?
Not in a month of Sundays.
By contrast, modern central banking is a doomsday machine of financial booms and busts and ever intensifying financial instability. One of these days–perhaps when the current mother of all bubbles implodes–even the somnambulant Congressional Republicans may figure out the real enemy of American prosperity and productive capitalism.
That is, a rogue central bank that has seized plenary financial power already, and that is so mummified in groupthink that it will stop at nothing in the expansion of its remit. Even to the extent of sending clueless career apparatchiks like Loretta Mester to the ends of the earth to flog the unspeakable folly of “helicopter money”.
Link to full article…