The bottom was set in 2015 when gold was hated and disregarded by investors—it was trading for $1,099.

Portfolio Wealth Global has spent hundreds of hours speaking with world-class mining speculators, and what has become most clear to our members by now is that when this sector becomes ugly, distressed and disgusting, it also becomes awfully cheap and attractive—these attributes go hand-in-hand. That’s the gold playbook for massive profits.

I personally own precious metals because it’s the sensible thing to do. I also own some cryptocurrencies, as a speculation into the future of payment systems.

With the national debts of all modern nations, from Australia to Japan, the entire continent of Europe, Canada, and the granddaddy of all debtor nations, my native U.S. of A. ballooning into the tens of trillions, it’s not even an option to have only fiat digits in your asset portfolio—safe havens must also be accumulated.

In 2008, when I started accumulating my “survival portfolio,” the clear-cut mentality of mining fortunes was revealed to me in the investment conference I attended. It was 2009, and Canadians were seeing a blood in the streets moment. 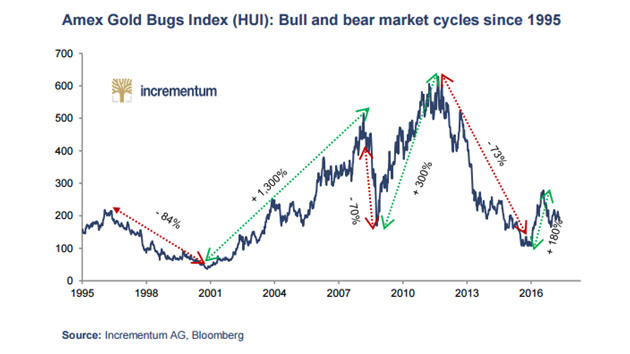 This is not a sector in which you sit back and forget about your portfolio for a few years.

Instead, it’s governed by wild rotations of hyper-valuations and bargain valuations.

Where are we now, overvalued or undervalued?

In late 2015, we were at the historical low point for mining shares. Yes, if you want to be filthy rich with commodities, the real money is in owning the companies and businesses that explore, rarely discover, even more rarely develop, and extremely rarely produce the minerals our world requires to function at a profit.

This could be anything of importance: iron ore, oil, natural gas, copper, aluminum, palladium, zinc, cobalt, uranium, or silver and gold.

Since only producers are cash-flowing, the rest of the mining universe is speculative. As a result, investors bid their prices up and down with no real measure of worth.

That’s the whole secret to succeeding and adding zeroes to our bank accounts in precious metals: wait patiently for markets to be absurdly cheap, even filled with bankruptcies, and then step in to gobble up the leftovers at ultra-low price points.

Gold is a very unique metal. In contrast with all other base and precious metals, its utility isn’t commercial, so it’s not consumed.

Instead, it is either worn as jewelry or stored in vaults.

All the gold that’s ever been mined is still above ground. This is in complete contrast to silver, for example, whose industrial uses are varied and above-ground inventory is low.

Gold is unique because it has specific attributes that give it superiority to function as money. In fact, it is the ultimate form of money—the core of the monetary universe.

Nothing can replace it as the No. 1 form of commodity-based money, and no resource ever will. Along with silver, these two precious metals have helped drive commerce for nearly 5,000 years. In times of economic uncertainty, as our current abstract currency system cracks and show its fragility, the premium and the price investors, savers, and governments are willing to pay for it is without limits.

As investment demand grows, the price heads higher. Remember that in the past 20 years, there have been very few new discoveries, yet production is going full steam ahead. This means we are depleting known reserves without discovering new ones. Those are classic supply and demand economics, which will keep the metal priced even higher.

So long as interest rates remain close to zero, the missing piece of the gold rally puzzle is rising inflation levels, which might just be on the horizon, potentially leading to the end of the 8-year broad index bull market.

Since I realized the grave danger of the economic system we live under, my life’s work has been devoted to helping people detach themselves from mainstream stupidity and follow unconventional wisdom—the only kind that actually brings positive outcomes.

Tom Beck is the founder of Portfolio Wealth Global. Known as one of the first millennial millionaires in the United States, Beck is a relentless idea machine. After retiring two years ago at age 33, he’s officially come out of retirement to head up Portfolio Wealth Global. He brings a vision of setting a new record for millionaires with his seven-year plan to accelerate any subscribers’ net worth who will commit to the income lifestyle. Beck delivers new ideas on the marketplace that were once only available to the rich. Traveling the world, he’s invested in over a dozen countries, including real estate.