Given the backdrop of one of the most uncertain macroeconomic, systemic, geopolitical and monetary outlooks both the U.S. and the world have ever seen, we are likely to see gold do well in its traditionally seasonal strong period. Possibly, the most vitriolic, hateful and divisive election in U.S. history is set to be witnessed and this will likely lead to considerable volatility in markets and should see the dollar come under pressure. The election date is Tuesday, November 8, 2016.

The spring and summer months frequently see seasonal weakness, since gold became a traded market in 1971. Gold bullion often sees periods of weakness in the summer doldrum months of May, June and July.

August tends to be a better month for gold but not this year with gold down nearly 2% in dollar terms, 3% in euro terms and 1.8% in sterling terms.

Gold’s traditional period of strength is from August through to January and February with weakness and a correction frequently seen in October. Thus, August is generally a good time to buy after the seasonal spring and summer dip.

This year gold rose in June and July before and after the Brexit market shock and on very robust global demand. Gold has dipped this August, despite August along with September and November being some of the best months to own gold. This is seen in the charts and tables showing gold’s monthly performance over many different time frames. Gold’s weakest months since 1975 have been June and July (see table below) and buying gold in August has generally been a good trade. 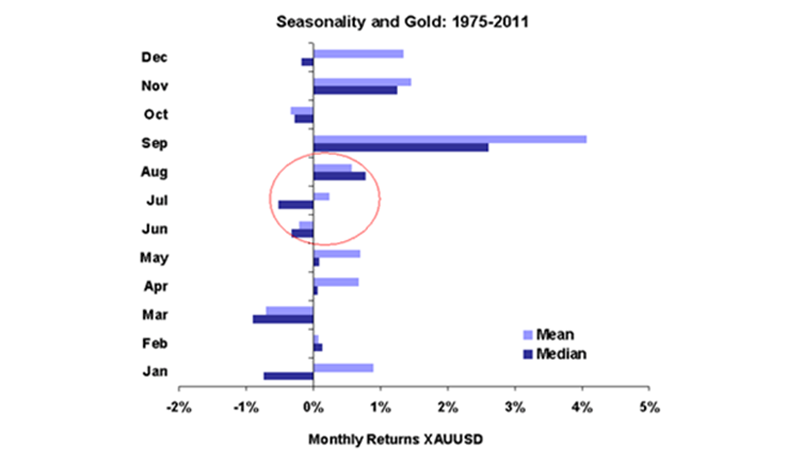 Late summer, autumn and early New Year are the seasonally strong periods for the gold market due to robust physical demand in Asia in particular. This is the case especially in India for weddings and festivals including Diwali and into year end and, since the market was liberalised in China, for Chinese New Year when the voracious Chinese stock up on gold.

This has been less the case in the mini bear market of recent years when unusually gold actually performed poorly in the winter months, in particular December, and somewhat oddly tended to have its seasonal low on or very close to December 31st.

Year end book closing or painting the tape? Tape painting is the illegal trading practice by hedge funds and banks who manipulate a market by buying and selling an asset to create the illusion of strength or weakness, change sentiment and to manipulate or scare off buyers who follow the trend pushing the price higher or in this case lower.

Interestingly, January has been one of the best months to own gold in the last five years as prices bounce from the peculiar year end lows.

Gold’s ‘summer doldrums’ period is coming to a close. Traditionally seasonal factors and less liquid markets often result in weakness in the precious metal markets, creating an attractive buying opportunity. This appears to be the case this August again. The data is compelling but it is important to realise that the seasonal data is just another indicator. Gold’s recent weakness could continue in the coming months – it is very unlikely given the fundamentals but possible nevertheless.

Investors should, as ever, avoid attempting to time the market and consider geometrically cost averaging their gold bullion and silver bullion purchases. This way they protect themselves from market falls and also from buying again at much higher prices. They also protect themselves from not owning gold and silver bullion which is a risk in and off itself.

Absolutely nothing has changed regarding the fundamentals driving the gold market. Janet Yellen and her merry band of central bankers are continuing ultra loose monetary policies. The money ‘punchbowl’ is still overflowing and there is going to be the mother of all hangovers.

Over $13 trillion of bonds are now trading negatively and now depositors are exposed to negative interest rates and deposit bail-ins.

We are confident that gold, and silver, have resumed their long term secular bull markets. This trend is likely to continue for at least 3 years and likely for a longer period given the scale of the geopolitical risks today and indeed the very real challenges facing the financial and monetary system and consequently savers, investors and pension owners.

Owning physical gold and silver coins and or bars in your possession and owning bullion in allocated and most importantly in segregated accounts will continue to protect and grow wealth in the coming years.

Buy 10 oz Silver Bars at SD Bullion
As Low As 65 Cents/oz Over Spot!