Tom Beck, editor of Portfolio Wealth Global, says if he’s learned one thing in the markets, it is that Jim Rogers never misses a big long-term investment thesis, and that Rogers has basically told investors to “forget China, buy Russia.”

Jim Rogers first visited Russia in 1966 and was pessimistic for almost five decades, but he now sees Russia’s vast natural resources (it’s the world’s largest petroleum producer) and that it is not a significant debtor nation.

The global economy is in deep trouble, more than any other time in this 75-year debt cycle, and I am, for the first time, making big bets with commodities—specifically precious metals and gold stocks.

Rogers is long the ruble and Russian markets. “I was bullish on Russia before Trump came along with his positive comments,” he says, but I think he is bullish because of this chart.

He has been buying gold on dips, but I’ve read all of Rogers’ books over the years, and I think the reason he is all over Russia is because it is not Trump’s major enemy in the trade war.

A more aggressive stimulus plan is going to embark this year, and I wouldn’t be surprised to see central banks using their lawful loopholes to create “direct injection” programs for the U.S. economy.

A country that adds gold reserves to their system will thrive in this inflationary environment much better than countries that dump gold and buy dollars and Treasuries.

This is why, on top of high-yield, under-the-radar investments, I am following Jim Rogers into Central Asia—specifically with regards to gold.

Gold miners are going through a tough cycle because they can’t find new deposits easily, but that’s not the whole story.

The big miners, the behemoths, have become profitable for the first time in years.

This is a major turning point.

What they are after now are acquisitions!

Their assets are depleting, and they will look to make major takeovers of juniors—that’s much easier than finding new deposits.

Yellen, Draghi, Bernanke and all the people who think that wearing a suit makes them smart (we call them liars) are buying gold—yes, central banks are the major driving force behind gold demand. 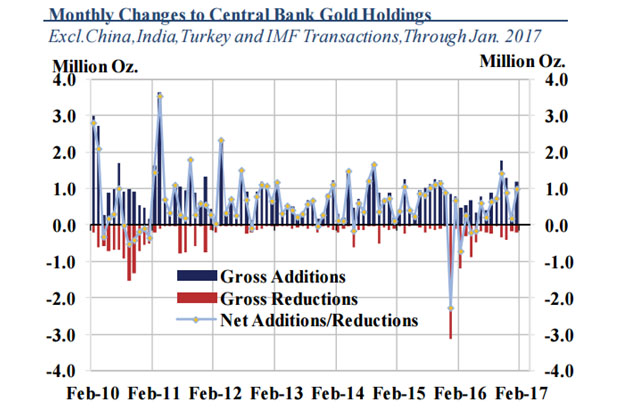 I have seen only one national central bank, though, that is openly encouraging its citizens to buy gold. This is Kyrgyzstan’s Tolkunbek Abdygulov, who told the citizens that his dream is to turn the former Soviet Union member into “a nation of savers.”

Because Kyrgyzstan has some of the best gold mines in the world, and because they are so friendly to gold, the next major takeover can come from there, and these large-cap “eating up” junior deals have historically made investors a fortune.

That’s why this new gold stock, which just commenced trading on the 31st of March, is Portfolio Wealth Global’s No. 1 company for immediate gains, and it’s completely under the radar!

Jim Rogers loves Russia because he knows their equipment during the communistic era was primitive and that a new company drilling historical Soviet holes—which already have 900,000 ounces of high-grade gold estimates—can reveal overnight that the mineralization is much larger with modern technology!

This generational discrepancy between Soviet era mentality and modern-day Russia is what I think Jim Rogers is fascinated with in general, and the company Portfolio Wealth Global discovered is using that opportunity in Kyrgyzstan now.

Tom Beck is senior editor of Portfolio Wealth Global. Known as one of the first millennial millionaires in the United States, Beck is a relentless idea machine. After retiring two years ago at age 33, he’s officially come out of retirement to head up Portfolio Wealth Global. He brings a vision of setting a new record for millionaires with his seven-year plan to accelerate any subscribers’ net worth who will commit to the income lifestyle. Beck delivers new ideas on the marketplace that were once only available to the rich. Traveling the world, he’s invested in over a dozen countries, including real estate.

Charts courtesy of the author