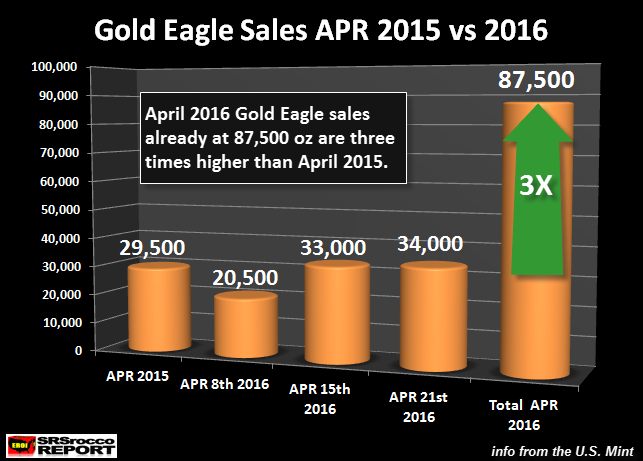 With the Chinese recent launch of their new gold-backed Yuan, the days of U.S. Dollar hegemony are numbered.
When the world starts dumping U.S. Treasuries and Dollars, investors better make sure they have already own physical gold and silver.

I hear more and more evidence from contacts in the financial and precious metal industry that the U.S. banking industry and Dollar are in serious trouble.

While some of individuals believe that the Fed and U.S. Government will continue rigging the markets for the next decade or more, I believe we will witness a financial dislocation or black swan event within the next year.

As I have stated in several interviews, I sold my business and left the big city and moved to the country back in the beginning of 2007.   I knew the mortgage industry and economy were going to collapse.  What I didn’t know was the degree to which the Fed and Central banks could prop up the market.

It has been eight years now and the silver bullets have run out.  While the Fed and Central Banks will continue to rig the markets as best they can, the amount of debt overhanging the market has become unsustainable.  As Central banks push interest rates negative, it just motivates more investors to get into gold and silver.

Last week there were several emergency Fed meetings followed by China’s launching of its new gold yuan benchmark this Tuesday.   Also, according to Global Research News:

China has reportedly decided ”there can be no conversion of gold-backed Yuan to or from US dollars.”  What China fears is that many countries around the world will want to trade their reserve US dollars  for the new Yuan, leaving China with mountains of worthless US dollars.  China already has several trillion in US dollar reserves and does not want or need more.

If the news reports that China will not allow a conversion of its new gold-backed Yuan to or from U.S. Dollars, this is indeed serious trouble for the United States Empire.  Which is the very reason I believe there were emergency Fed meetings last week.  Even though there hasn’t been any major impact via the mainstream media, the ramifications are likely to become public in due time.

The telltale sign that something isn’t right in the financial industry is a surge in Gold Eagle sales.  Last year, total Gold Eagle sales for April equaled 29,500 oz.  However, in just the first three weeks of April this year, Gold Eagle sales have reached 87,500.  This is three times last years figures and we still have another week remaining in the month:

Now, if we compare total Gold Eagle sales for 2016 versus the same period last year, we have the following result: 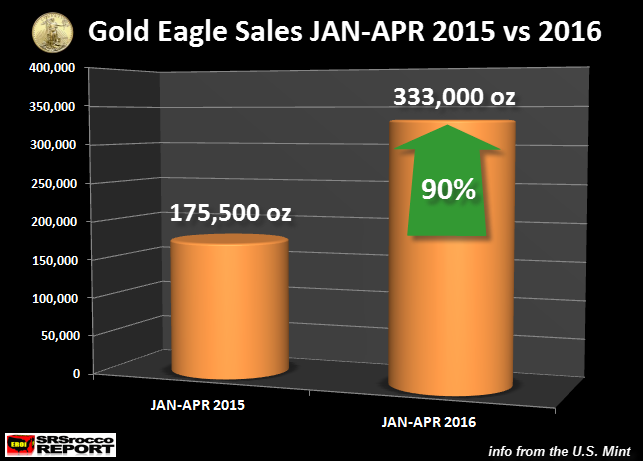 The U.S. Mint’s Gold Eagle (JAN-APR) sales are 90% higher at 333,000 oz compared to the same period last year of 175,500 oz.  If demand for Gold Eagles continues to remain strong for the remainder of the year, we could see total sales exceed 1 million oz.  This figure hasn’t been seen since 2011 when total Gold Eagle sales reached 1 million oz.

With the Chinese recent launch of their new gold-backed Yuan, the days of U.S. Dollar hegemony are numbered.  When the world starts dumping U.S. Treasuries and Dollars, investors better make sure they have already own physical gold and silver.