With so many rumors and complaints over the years about flash crashes, overleveraging, taking advantage of clients and overcharging, blockchain could signal the end of big banks having their way on the Comex and paper metals markets, says Tom Beck, founder of Portfolio Wealth Global.
Submitted by Streetwise:

I bought my first gold and silver coins in 2003. I was 21, and well on my way to becoming a proponent of free markets and commodity-based money.

John Williams, of Shadowstats.com, and the brilliant analyst Jeff Clark, of GoldSilver.com, have published this important chart that, if you understand it correctly, would mean to never sell one ounce of your gold.

Today, the metal only covers 6% of the global currency supply, and that is a century low. Not since the Federal Reserve was created has that much of our global payment system been based on credit, without any tangible commodity backing it.

I’m personally not of the opinion that the gold standard is coming back soon, but Portfolio Wealth Global does see gold covering more than 15% of the currency supply, which translates to $3,000 per ounce using today’s gold prices.

Since I bought my coins, I’ve been hearing about manipulation by big banks, to which I always reply that all markets are rigged in some way or another, but what JP Morgan and Barclays have done with the silver market is shameful, and there’s now a way to truly stop it.

Silver might be the world’s cheapest commodity of all time. Its price is less than 1% of what it was just 37 years ago using the same inflation metrics.

This wouldn’t be possible if complete transparency existed. The fact is the COMEX in London and New York is leveraged to about 247:1. For every 247 paper ounces, there’s only 1 physical ounce. This allows leveraged swings and smash-downs to occur, almost without repercussions.

The blockchain technology that drives the Bitcoin network has one great advantage: it is immutable, which means that past data can never be changed.

It is a point of reference that can be trusted, and it has meaningful impacts for gold. Using blockchain, state-of-the-art communications enable gold to be redistributed across the globe with the snap of a finger, without ever leaving vaults.

China’s gold market is now the largest in the world, and it is increasingly moving online. The Precious Metals Department of leading Chinese bank ICBC explains is leveraging the Internet to drive gold investments among savers, from the young millennials to professional and seasoned investors. 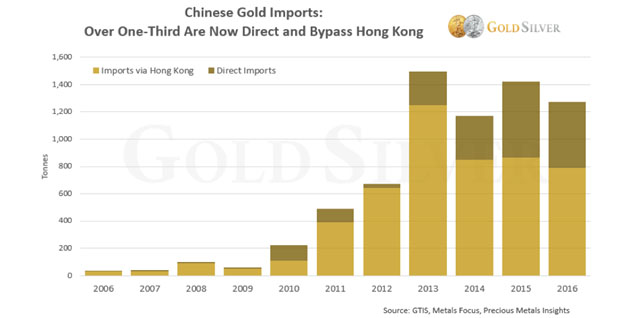 The dream of a decentralized precious metals market is ever closer.

Though millennials have no clue what the historical roles of gold and silver are, their purchasing power is insignificant compared with the rapidly growing middle classes of China and India.

Gold is becoming part of financial technology—it’s turning more modern and becoming easier to store and own.

Over the summer, I’ll show great ways to own it.

When the market becomes more sophisticated and price discovery occurs, the price of silver could easily be $64 per ounce.

Remember, most Asians don’t see a huge difference between silver and gold with regards to their role as a store of value, therefore they’ll buy what’s cheaper, and silver is literally dirt cheap.

Tom Beck is the founder of Portfolio Wealth Global. Known as one of the first millennial millionaires in the United States, Beck is a relentless idea machine. After retiring two years ago at age 33, he’s officially come out of retirement to head up Portfolio Wealth Global. He brings a vision of setting a new record for millionaires with his seven-year plan to accelerate any subscribers’ net worth who will commit to the income lifestyle. Beck delivers new ideas on the marketplace that were once only available to the rich. Traveling the world, he’s invested in over a dozen countries, including real estate.